The New Museum present the first New York solo exhibition by Haegue Yang. Voice and Wind features the artist's installation Series of Vulnerable Arrangements - Voice and Wind (2009) - a labyrinthine system of stacked venetian blinds, industrial fans, and scent atomizers that will transform the New Museum's lobby gallery into an immersive experience. 'Free' is an exhibition including 23 artists working across mediums - including video, installation, sculpture, photography, the internet, and sound - that reflects artistic strategies that have emerged in a radically democratized cultural terrain redefined by the impact of the web. 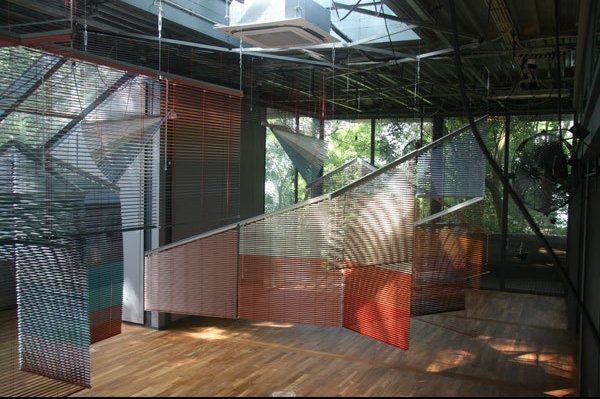 The New Museum will present the first New York solo exhibition by Haegue Yang (b. Seoul, 1971). One of the leading artists of her generation, Yang has participated in numerous exhibitions internationally, and represented South Korea at the 53rd Venice Biennial in 2009, but she has yet to exhibit in a New York museum. “Voice and Wind: Haegue Yang,” at the New Museum will feature the artist’s installation Series of Vulnerable Arrangements—Voice and Wind (2009)—a labyrinthine system of stacked venetian blinds, industrial fans, and scent atomizers that will transform the New Museum’s lobby gallery into an immersive experience.

Yang’s work is marked by a particular preoccupation with the coexistence of formalism and emotion, determination and meandering. She has created meditative, striking installations at the 2006 São Paulo Biennial, sala rekalde in Bilbao, and REDCAT in Los Angeles, in which man-made sensorial stimuli enhance an experience of space and time. For Yang’s installation at the New Museum, industrial fans placed within the gallery will generate wind at various intervals, altering both the stability of the blinds as suspended barriers and the movement of visitors through the space.

Scent atomizers integrated in and around the system of blinds will infuse the installation with a subtle olfactory experience, calling upon the visitors’ subjectivity as a key element in the definition of the space. Flooded with natural light, Series of Vulnerable Arrangements—Voice and Wind (2009) will evoke shadows of places and experiences not physically present. As in her earlier works, Yang introduces electricity as an invisible connection between objects, people, and ideas, and as the source of artificial approximations of sensual experiences “that conjure other places, other people, comfort, distress, something familiar, perhaps something profoundly forgotten,” writes Eungie Joo, curator.

In Series of Vulnerable Arrangements—Voice and Wind, as in other related installations, Yang employs commercially-manufactured venetian blinds as a kind of imperfect spatial boundary, easily transgressed visually, aurally, and physically. For this installation, Yang chose a custom selection of uncategorizable colors and patterns that exist at the edge of taste. These functional decorations for the home defy rigid concepts of design or periodization to emphasize the nonaesthetics of the private sphere, “where the self is cared for and contemplated, and can be shared in a different way,” says Yang.

“Voice and Wind: Haegue Yang” is curated by Eungie Joo, Keith Haring Director and Curator of Education and Public Programs at the New Museum. Joo also served as Commissioner of the Korean Pavilion at the 53rd Venice Biennial in 2009 for the original presentation of this work in the exhibition “Condensation: Haegue Yang.”

Haegue Yang (b. Seoul, 1971) received her B.F.A. from Seoul National University, Fine Arts College in 1994, and her Meisterschüler from Städelschule, Frankfurt am Main, in 1999. Her work has been included in numerous international exhibitions such as the 2006 São Paulo Biennial; the Anyang Public Art Project 2007; the 55th Carnegie International, Pittsburgh; the 2008 Turin Triennial; “Asymmetric Equality,” REDCAT, Los Angeles; “Brave New Worlds,” Walker Art Center, Minneapolis; the 53rd Venice Biennial; and most recently “10,000 Lives,” the 8th Gwangju Biennial, and a solo exhibition at Artsonje Center, Seoul. In 2011, the artist will present a major solo exhibition at Kunsthaus Bregenz. Yang lives and works in Berlin and Seoul.

Today, culture is more dispersed than ever before. The web has broadened both the quantity and kind of information freely available. It has distributed our collective experience across geographic locations; opened up a new set of creative possibilities; and, coextensively, produced a set of challenges. This fall, the New Museum will present “Free,” an exhibition including twenty-three artists working across mediums—including video, installation, sculpture, photography, the internet, and sound—that reflects artistic strategies that have emerged in a radically democratized cultural terrain redefined by the impact of the web. “Free” will propose an expansive conversation around how the internet has affected our landscape of information and notion of public space. The philosophy of free culture, and its advocacy for open sharing, informs the exhibition, but is not its subject. Instead, the title and featured works present a complex picture of the new freedoms and constraints that underlie our expanded cultural space.

“Free” is inspired in part by “Dispersion” (2001–), an essay by the artist Seth Price that is available as a free online booklet and will be featured within the exhibition as a large-scale sculptural installation composed of nine panels each imprinted with a page from the original booklet. The essay traces the increased dispersion of culture, by examining how its circulation and reception has changed across mediums from print, to video, and to the web. In light of the way we now experience political events and pop culture, Price offers a new description of public space and questions the viability of public art as we understand it. Price writes: “Publicness today has as much to do with sites of production and reproduction as it does with any supposed physical commons, so a popular album could be regarded as a more successful instance of public art than a monument tucked away in an urban plaza.” The works in “Free” alight from Price’s statements to demonstrate and explore the multiple ways artists utilize, appropriate, and reenact material sourced from the web, and also address pressing questions like: What do we have access to? What is hidden? What are the possibilities and excesses of a more open and tranparent culture?

For Lisa Oppenheim’s 35mm slideshow projection The Sun is Always Setting Somewhere Else (2006), the artist sourced from Flickr snapshots of sunsets taken by US soldiers based in Iraq, and re-photographed the soldiers’ photos against her own horizon in America, framing a common tendency to connect to a universal experience from a foreign vantage point. Artist Aleksandra Domanovic instigates a process of cultural transubstantiation in her work 19:30 (2010)—for which she traveled around the former Yugoslavia collecting visual introductions of nightly news shows from national television stations. She then uploaded these clips online and encouraged DJs to use them as the basis for new techno tracks—a genre of music chosen because it is based on the creation of infinite variations of original productions. Exhibited within the gallery as a two-screen video installation, 19:30 creates an unusual national archive while demonstrating how flexible the meaning of media can be, by revealing how easily obsolete culture from this former country (the nightly news sequences) can be rejuvenated into something vital with a shift in context.

Other works in the exhibition explore strategies around the appropriation of digital imagery. Take No Photographs, Leave Only Ripples (2009) by Clunie Reid is comprised of a series of found images the artist layers with hand-drawn anarchic expressions. Dark Current (2010), a series of photographs by Andrea Longacre- White, explores the aesthetics of photographic degradation, through images that the artist re- photographed countless times. Takeshi Murata, in a premiere single-screen video, explores the way public images are interpreted, transformed, and personalized as they cycle through different contexts and hands. For this new video, Murata used the 3d modeling program Cinema 4D to investigate the notion of knockoffs through Popeye, a popular character that has been endlessly remixed online and whose copyright in Europe recently expired.

Artist Trevor Paglen investigates information—be it personal, scientific, or governmental data—that is masked from public view. In his new series of large-scale landscape photographs, Paglen reveals classified information: federally sanctioned eavesdropping facilities deep in West Virginia and the orbits of dead spy satellites around the moon—all secret activity made visible with extensive research and a long-range lens. Martijn Hendriks considers common forms of mass communication in his Untitled (Black Video) (2009). Hendriks sourced anonymous comments from an online video forum who participants were responding to the leaked video of the execution of Saddam Hussein: some crude, some unsettled, some laissez-faire, all demonstrating the kind of freedom associated with being unidentifiable. Artist Joel Holmberg asked searching, existential questions in the user-generated forum Yahoo Answers, like ‘How does it feel to be in love?’ or ‘How do I best convince someone I am an artist,’ in substitution of the mundane questions usually asked about pets or parking needs. Holmberg’s performance Legendary Account (2007-10) turns Yahoo Answers against itself by asking profound questions, instead of easily answerable ones.