Apertures: Outopia, Eutopia and Other Spaces

This exhibition shows fresh and relatively unknown artists that nevertheless are forces to be reckoned with and to be heard from in the near future: Fay Ku, Peter Gerakaris, Orit Ben-Shitrit, Yeon Jin Kim, Heejung Cho, Lilia Ziamou, Baris Gokturk. 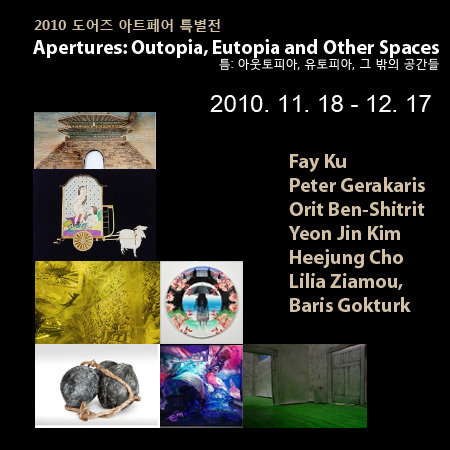 Doors, windows and apertures of all sorts have been important motifs in the artworks of Degas and Matisse but also countless other artists. Degas’ many ballet scenes contain doors and windows but at times, framed mirrors in the shape of doors. Matisse throughout his careerincluded doors and windows even in his early graduation works as well as in numerous pre-teen works in the Fauve style, and after in his Notre Dame series. In his 20s, 30s and 40s indoor scenes with women, apertures are ever-present. There is an element of mystery necessarily associated with facing these thoirai (doors), an aura of the unknown that simultaneously invites and repulses the viewer. On the one hand he/she desperately wants to enter and discern whatever exists on the opposite side, and on the other, the fear of that discovery is almost sublime. It was always the avant-garde who played the role of scout who proceeded ahead of the rear-guard or troops, so that he could return and report on what lay ahead. The term is borrowed from the vocabulary of war strategy and was defined thoroughly by Renato Poggioli in his book,The Theory of the Avant-Garde.

We can also categorize those artists ahead of their time as Avant-Garde and look to them for signs of what lies ahead in the arts.Consequently, in this show we’ve included new, fresh and relatively unknown talents that nevertheless are forces to be reckoned with and to be heard from in the near future.It is to these new talents that the art world owes its thanks, for they maintain the excitement of the yet-unabsorbed-by-the-establishment arts. They exist in a place that is not yet established, and can be seen both as outopia (noplace) and eutopia (utopia).

Fay Ku uses images relating to the painful experiences of women out of her own Chinese cultural background. They emerge broken from traps, doors, and other places that speak to literal or psychological space. Ku’s images involve complex narrative in a figurative style that touches upon the problematics of isolated figures that float within indecipherable space. The blank background is used as void that envelopes her figures in dreamscapes and impossible scenarios. Ku’s delicately drawn figures on white paper are used to explore sexual and cultural identity space as well as the interstices in between. Ku’s women flow on the paper and somehow appear ethereal and dreamy, offering nuanced and multivalent readings.

Peter Gerakaris comes from rural New Hampshire and was raised as a “free-range-child.” His paintings feature brightly colored, Nature-Culture detail-oriented themes. Gerakaris uses unusual formats such as tondos, doors, or monumental canvases to combine and conflate graphics with natural organic forms and figures that result in unique works in oil paint. He plays with the language of nature tempering it with his visual vocabulary. His countless artistic inspirations range from Persian carpets to Japanese prints and from Op-art to popular graphics. The rounded tondo and door formats seen in his present body of work can be seen as openings to other worlds, ones that blur the border between nature and culture, or inside and outside.

Orit Ben-Shitrit’s series Family, Religion and State (FRS) is concerned with these three social structures that overlap within a nebulous space. While a state can be comprised of both family and religion, incorporating these, it is quite possible that they may be opposed. Particular Religious and political beliefs used as unifying principles, unless extremely inclusive and tolerant, can hurt anyone circumventing them. Ben-Shitrit often refers to Jerusalem because this city, as expressed in his philosophy, contains the conflict, contradiction and multi-valence manifested by its governing bodies and religions. Ben-Shitrit’s fragmented spaces are often puzzling and disorienting in their viewpoint and content. His work is layered and complex without the use of traditional perspective or easily readable motifs. His philosophically oriented photographs reflect Plato’s Cave while begging for answers. Is this the object or its reflection? Are we on the inside or outside?

Yeon Jin Kim video-dreamscapes of her native Seoul and her adoptive country the US, where she moved in 2005. Freud would call it “wishful thinking” were he to see Kim’s depiction of a bridge connecting New York to Seoul. Kim’s inspiration began with a recurring dream in which she travels on this bridge to many places on her way to Seoul. Kim makes 3D models of Islamic villages, American suburbs and Korean cityscapes, filming them sequentially in long strips with a tiny spy camera. They weave in and out of our view, as if seen by someone riding a vehicle, appearing and disappearing. Dream displacement and conflation result in imagery that is logically improbable. Kim offers us a landscape full of animals but without human presence, in which she fuses dream, fantasy and psychological space into a composite landscape.

Heejung Cho uses collage, painting and photographic media to depict prosaic scenes such as laundromats, coffee shops, grocery stores, subways and streets and other buildings. Referencing the emotional transitions of life as well as compressing lived time, Cho creates relief paintings, or flattens sculpture into site specific installations. This collection of disparate neighborhoods and cultures can be associated with the artist’s own feelings of displacement as an immigrant. Feeling as neither fish nor fowl, the dislocation and process of acculturation, leaves the traveler feeling out of place in both native and foreign soil.
Lilia Ziamou’s works are about interpersonal, psychological and psychosexual space. Ziamou depicts the problematics of relationships often expressed with difficulty. Ziamou in her multimedia works—sculptures, photographs, projections— explores the sensations of the body as it relates to the outside world. Her formal inquiry is into the relationship of the curve, crevice, roundness, softness, hardness, and the placement of disparate body parts that relate to the viewer as clues to his own psyche.

Baris Gokturk’s images convey the contradictions between culture and power. Described by Gakturk his large-scale paintings “are idiosyncratic (dys) utopian attempts of piecing together obscure, nightmarish narratives based on the deliberately mystified notions in the current political, financial and military climate.” He explores the continuous disjunctions between language and action in society while highlighting distorted social narratives into his special brand of pieced together rhetoric as a comment on contemporary culture.