Malta Contemporary Art Foundation presents a series of new paintings by Austin Camilleri. The origin of the new works therefore do not know a recent tabula rasa, but unfold in a performative fashion through a dialogue between the younger and the contemporary Camilleri (and even at times a totally extraneous artist), a tour de force of the duality of characters and of concepts. 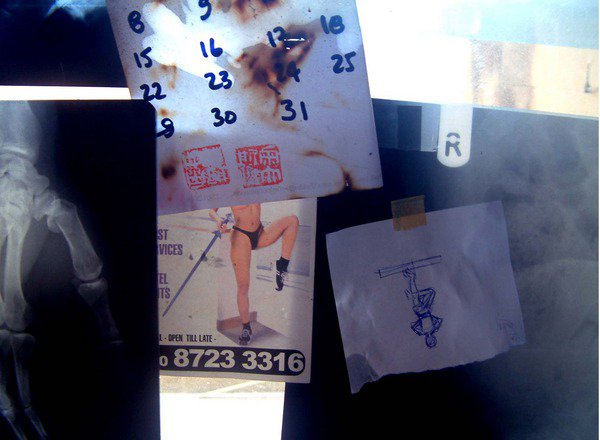 Austin Camilleri’s painting process is reminiscent of the sixth century Western European practice of ‘Palimpsest’, one of the earliest processes of recycling of material, with the exception that the artist does not re-use his canvases for economic or ecological motives but rather re-appropriates his own existing work as hostage to act as new reference framework for further inception. Camilleri’s final forms are not witness to the complete erasure of the original, but through a complex structure of layering and masking, the various histories of the paintings retain parallel conviviality.

The origin of the new works therefore do not know a recent tabula rasa, but unfold in a performative fashion through a dialogue between the younger and the contemporary Camilleri (and even at times a totally extraneous artist), a tour de force of the duality of characters and of concepts. Austin is here presenting us with not one but two or possibly more works per hanging – a curious dichotomy of forms which bears true testimony to the artist’s creative process, one which leaves no stone unturned in its strife to work for and against the grain contemporaneously.

Camilleri’s works go through an elaborate process of re-invention with the exception that they not only reference the original or earlier work but also incorporate it physically on the same canvas. This working practice is a relatively new direction adopted by the artist, a phase which saw its beginning around 2006 with Austin’s revisiting of his own paintings of the 1990s, following intense phases of sculptural, installation and video activity. This process of using existing paintings to serve as significant departure points for further image intervention by the artist was also extended to incorporate appropriated, acquired and even commissioned works by other artists.

It is through this practice of parallel representation (which also echoes the imagery created when two video streams are frozen in mid transition) that Camilleri manages to create a metaphor that stands for his own characteristic restlessness, a trait that permits not only self-reconsideration but also finds methods of reconciling opposing polarities of concept through transparency of paint and masking of forms. The video mix or transition is a device that in the language of media many times symbolizes a passing of time between the former and the latter scenes. Freeze frames caught in mid transition by their very nature put across two strands of parallel, possibly diverse information that fuse into one visual composite.

The practice of adding veils of colour onto an existing colour structure in both the (visual) electronic and digital media as well as in painting many times result in a neutralising of the overall picture vibrancy through a process of cancellation produced by opposing chromatic strengths. Camilleri makes full use of this technique and couples it occasionally with strategic scraping and masking to reveal the various intensities of forms and layers of paint residing beneath. Through this fragmentary practice of conceptual and visual (re) intervention the artist chooses to suspend both the original and the new versions of the painting in their newfound meta language, a strategy that points to the well-worn practice of parallel narrative, involving the coexistence of simultaneous and interconnected points of view so relevant to today’s Internet screen culture.

A further element that contributes to the works’ construction and a further conceptual and at times communication or narrative device within these complex structures is the element of text – scratched, painted, written and stencilled. This common ploy within Camilleri’s work adds a capping layer, which although in many instances occupies a rather discrete area or is painted in a muted tonality and therefore intended to whisper rather than shout the intended message, it nevertheless manages to create an incredible presence through its readable nature within the work’s overall schema of divulgence.

Text in Austin’s work is therefore premeditated to perform on two main perceptive levels, the semiotic and the visual, acting as an important reference marker that pushes further the viewer’s ‘reading’ of the painting both as a work of art but also as an object of mediation within a lived contemporary culture. These charged paintings by Camilleri go way beyond pure aesthetics. Each work establishes a unique poiesis of self-location – grounds and boundaries within a world that are defined by the same works themselves – an act, which sustains the crucial dynamic of the artist-work-receiver bond. Encountering such a poetical space even through this modest collection is a promise of sheer enjoyment to be had through the same works’ audacious insight into of the artist's working practices as much as through the encounter’s yields of new and surprising discoveries with each new viewing. Vince Briffa (CamilleriCarbonaro, Munich, 2009)