Color in Space and Time. The exhibition features more than 150 works from the artist's wide-ranging career, culled from major private and public collections around the world. His wide-ranging body of work includes unconventional color structures, light environments, street interventions, architectural integration projects and experimental works that engage the response of the human eye while insisting on the participatory nature of color. 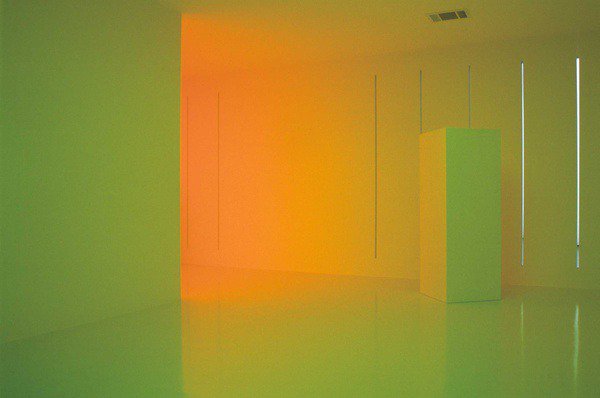 For more than five decades Carlos Cruz-Diez (b. 1923) has intensively experimented with the origins and optics of color. His wide-ranging body of work includes unconventional color structures, light environments, street interventions, architectural integration projects and experimental works that engage the response of the human eye while insisting on the participatory nature of color. The Museum of Fine Arts, Houston, and the Cruz-Diez Foundation, Houston are organizing the first large-scale retrospective of this pioneering Franco-Venezuelan artist. Carlos Cruz-Diez: Color in Space and Time will feature more than 150 works created from the 1940s to today, including paintings, silk-screen prints and innovative chromatic structures; room-size chromatic environments, architectural models and videos; and a virtual re-creation of the artist’s studio. The exhibition will introduce international audiences to Cruz-Diez’s extensive production and will place his theoretical and artistic contributions to 20th-century Modernism in a broader context than they have traditionally been seen.

The starting point for Cruz-Diez’s chromatic investigations is the unstable nature of color. In his view, color is not a pigment on a solid surface but a “situation” that results from the projection of light on objects and the way this light is processed by the human eye. Insofar as color depends on the movement of the viewer in front of the work, it entails a participatory and interactive experience in space and time. The artist’s task is to induce “situations” and to stimulate the dialogue between the stable and the unstable nature of color on a variety of supports by means of multiple strategies and unconventional materials that included cardboard, aluminum, polished stainless steel and acrylic paint.

“Generally considered in the context of Kinetic Art, the significance of the large body of work produced by Cruz-Diez since the 1950s extends beyond issues of movement, vibration and sheer retinality. From the beginning, Cruz-Diez focused his research and experiments on one critical issue: the investigation of color as a living organism that is in a constant state of transformation. This exhibition aims to show his radical and unprecedented achievements in this area,” said Ramírez.

Cruz-Diez’s work combines color theory, science, kinetics, mechanical engineering and the painter’s craft and defies easy categorization. In order to realize his artistic vision, particularly with regard to the innovative Physichromies series, the artist adapted or invented his own tools and machines. And he has involved his family and a large corps of assistants in the enterprise, with guild-style studios in Paris, Panama, and Caracas. The works on view in Carlos Cruz-Diez: Color in Space and Time will be culled from the Cruz-Diez Foundation Collection at the MFAH and the Atelier Cruz-Diez in Paris and Panama; as well as public and private collections in the United States, Venezuela, France, England, Germany, Italy, and Spain.

About the Exhibition
The exhibition traces the artist’s development from rarely seen figurative oil paintings, created when the artist was still a student, to full-fledged explorations of color in motion. Cruz-Diez’s Physichromies—or “physical color” series—consist of vertically aligned sequences of colored lines and reflective filters that are modified according to the angle of the ambient light and of the viewer’s position, thereby, casting color into space and creating a continually evolving situation dependent on the viewer’s movement.Over 55 Physichromies will be shown together for the first time, showcasing the eight stages that mark the conceptual and technological evolution of this series: from hand-cut and hand-painted wood and cardboard pieces to the use of machine-cut aluminum strips and digital printing technology. Key examples of Cruz-Diez’s Couleur Additive (Additive Color) and Induction Chromatique (Chromatic Induction) works will also be on view. These are two interrelated series based on the principle of retinal persistence or “after-image,” whereby the viewer’s retina—when confronted with the combination of two complementary colors on a plane—produces a third virtual color. The artist has been refining these series since their inception in 1959 and 1963, respectively.

The centerpieces of Color in Space and Timewill be three interactive environments. In a Chromointerférence designed specifically for the Houston exhibition, museum guests will be able to walk into a large white room in which two planes of color continually undulate in bands projected onto the walls and floor, dissolving the surrounding volumes—including the viewers’ bodies—into color. The second environment, Transchromie, is a maze-like work consisting of large-scale, flexible, transparent color strips that museum guests can navigate through. The last—and perhaps the most radical—of his environmental proposals, Chromosaturation, consists of a sequence of three self-contained spaces where Cruz-Diez isolates “raw” color and creates a display of pure chromatic situations for viewers to experience with their entire bodies and all of their senses.

Complementing the works on view will bea simulation of the Atelier Cruz-Diez at 23 rue Pierre Sémard in Paris will be on display, made up of wall-size photographs of the interior. Visitors will be required to wear 3D glasses to experience the atelier environment, and two videos will further document the artist’s process as well as the ad hoc machines and tools he devised to produce his unique work. Another section of the exhibition will be devoted to Cruz-Diez’s architectural projects and interventions in urban settings, from walkways and hydroelectric plants to wheat silos. Scale models and a documentary video produced by the Cruz-Diez Foundation specifically for this exhibition will detail his large-scale site-specific initiatives in Europe, the United States and Latin America. MFAH visitors can also view Houston’s own public installation designed by Cruz-Diez: crosswalks on the museum campus that have been transformed into grids of color, producing a range of chromatic effects that unfold as the observer moves.

About the Artist
Born in 1923 in Caracas, Cruz-Diez has lived and worked in Paris since 1960 and manages additional studios in Panama and Caracas. He first emerged as an artist in the mid-1950s at the heyday of the Kinetic Art movement in Paris. Yet while he was friends with many of the artists in the group, he was never officially incorporated into it. His life’s work has been dedicated to showing how color can be transformed into an autonomous event capable of invading space.

In 1945, Cruz-Diez earned a degree in applied and manual arts from the Escuela de Artes Plásticas y Aplicadas de Caracas and joined the international advertising agency McCann-Erickson. By the age of 25, Cruz-Diez had risen to the position of art director at the agency, but he went on to work as a full-time artist and to teach History of Applied Art at the Escuela de Artes Plásticas y Aplicadas from 1953-55; at El Estudio de Artes Visuales, a graphic arts and industrial design workshop in Caracas that he opened in 1957 (where he first began the Physichromies series); again at the Escuela from 1958-60, where he served as professor and assistant director; at the Université d’Enseignement de Recherches from 1972-73, where he taught Kinetic Techniques; and as professor and Director of the Art Unit of the Institute of Advanced Studies, IDEA, Caracas from 1986 to 1993.

Public Programs
Leading up to the Sunday opening will be alecture, Conversing with Color: Carlos Cruz-Diez and Mari Carmen Ramírez, on Saturday, February 5, at 1 p.m. in the Brown Auditorium Theater (open to the public and free with general admission).

An “Artful Thursday” is scheduled for May 19 at 6:30 p.m., featuring a performance of new choreography, inspired by Cruz-Diez’s work, by CORE Performance Company.

Exhibition Tour and Sponsorship
This exhibition is organized by the Museum of Fine Arts, Houston and the Cruz-Diez Foundation, Houston. Major support for this exhibition has been provided by the MetLife Foundation.Additional generous funding is provided by:Mrs. Linnet F. Deily; The Boeing Company; and Leslie and Brad Bucher.

The catalogue for this exhibition receives generous funding from Mercantil Commercebank and Furthermore: a program of the J. M. Kaplan Fund.