The Deutsche Bank Series at the Guggenheim. The exhibition explores language and translation through video, film, and new media. Features recent time-based works by 11 artists including new acquisitions of works by Patty Chang, Omer Fast, Sharon Hayes, and Sharif Waked. This artists look to translation as both a model and a metaphor to critically comment on the past and to produce richly imagined possibilities for the present. 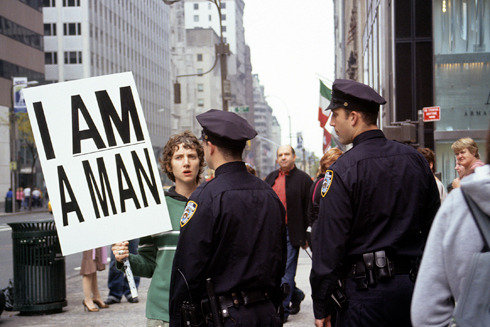 The Deutsche Bank Series at the Guggenheim: Found in Translation brings together eleven works by eleven artists that look to translation as both a model and a metaphor to critically comment on the past and to produce richly imagined possibilities for the present. Drawn from private loans and from the Guggenheim’s extensive collection of video, film, and new media, the exhibition focuses on artists who have come of age professionally within the past fifteen years, and includes four recent acquisitions that will be shown at the museum for the first time.

For the artists whose work is presented in Found in Translation, converting a text from one language to another exposes a discursive field in which the terms of identity—class, race, religion, sexuality—are negotiated, and meaning is generated. An apparently straightforward linguistic task therefore becomes a microcosm for the interaction between cultures, laden with power relations but also open to new aesthetic possibilities.

Delving equally into history and fantasy, the works in the exhibition investigate diverse political and social contexts; language continues throughout to provide the crucial link between the cultures and temporalities they explore. Because language is experienced in real time, Found in Translation concentrates on the time-based mediums of video, film, and 35 mm slide installation, which also allow artists to create immersive environments for their conceptual investigations. Acts of reading and speaking predominate: Patty Chang, Keren Cytter, and Lisa Oppenheim create cinematic reinterpretations of texts that feature or have been transformed by literal translations. Paul Chan, Brendan Fernandes, Sharon Hayes, Carlos Motta, Jenny Perlin, and Sharif Waked look to political history, reperforming and documenting written material from the past to approach issues of identity, protest, privacy, and free speech in the present. Omer Fast and Steve McQueen expand on these temporal displacements, using spoken language to disorient and reposition basic assumptions about contemporary society. Together, these artists highlight ways in which translation can illuminate the complex historical and political processes that govern life in a globalized world.

Public programs offered in conjunction with The Deutsche Bank Series at the Guggenheim: Found in Translation include the following events:

Elaine Terner Cooper Education Fund
Conversations with Contemporary Artists
A series of talks by established and emerging artists whose works are currently on view in Found in Translation. Following the program, guests are invited to enjoy a private exhibition viewing and reception. Tickets are $10, $7 for members, and free for students. For tickets, visit guggenheim.org/publicprograms, or call the Box Office at 212 423 3587.

Mind’s Eye
A program for visitors who are partially sighted, blind, or deaf, through Verbal Imaging, touch, and ASL, focuses on Found in Translation. Registration required at access@guggenheim.org or 212 360 4355.
Monday, April 4, 6:30 pm

Organized by Nat Trotman, Associate Curator, Found in Translation, the third exhibition in the Deutsche Bank Series at the Guggenheim, will be on view at the Solomon R. Guggenheim Museum, New York, from February 11 through May 1, 2011, and will travel to Deutsche Guggenheim, Berlin, in early 2012.

This exhibition is made possible by Deutsche Bank. The Leadership Committee for Found in Translation is gratefully acknowledged.