The Trauma of Painting. The exhibition positions the artist as a central protagonist of post-World War II art and revises traditional narratives of the cultural exchanges between the USA and Europe in the 1950s and '60s. It demonstrates how Burri created a new kind of picture-object that directly influenced Neo-Dada, Process art, and Arte Povera. 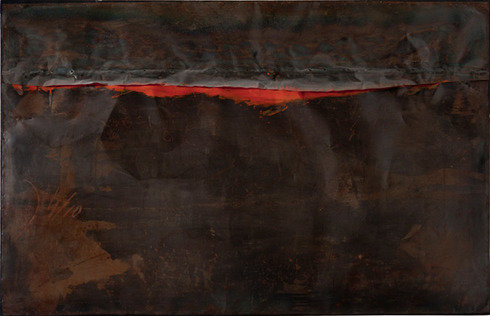 From October 9, 2015, to January 6, 2016, the Solomon R. Guggenheim Museum will present a major retrospective—the first in the United States in nearly forty years and the most comprehensive in this country—devoted to the work of Italian artist Alberto Burri (1915–1995). Exploring the beauty and complexity of Burri’s process-based works, the exhibition positions the artist as a central protagonist of post–World War II art and revises traditional narratives of the cultural exchanges between the United States and Europe in the 1950s and ’60s. Burri broke with the gestural, painted surfaces of both American Abstract Expressionism and European Art Informel by manipulating unorthodox pigments and humble, prefabricated materials. A key figure in the transition from collage to assemblage, Burri rarely used paint or brush in conventional ways, and instead worked his surfaces with stitching and combustion, among other signal processes. With his torn and mended burlap sacks, “hunchback” canvases, and melted industrial plastics, the artist often made allusions to skin and wounds, but in a purely abstract idiom. The tactile quality of his work anticipated Post-Minimalist and feminist art of the 1960s, while his red, black, and white “material monochromes” defied notions of purity and reductive form associated with American formalist modernism. Bringing together more than one hundred works, including many that have never before been seen outside of Italy, the exhibition demonstrates how Burri blurred the line between painting and sculptural relief and created a new kind of picture-object that directly influenced Neo-Dada, Process art, and Arte Povera.

“This comprehensive exhibition of the work of Alberto Burri affirms his position as a leading pioneer of postwar European art and one of the most groundbreaking artists of his time,” stated Richard Armstrong, Director of the Solomon R. Guggenheim Museum and Foundation. “Through the scholarship of our curatorial team led by Emily Braun, the Guggenheim is bringing to light new aspects of Burri’s experimental and innovative practice. We welcome the opportunity to reacquaint twenty-first-century museumgoers with Burri’s legacy and to reexamine his impact both on his contemporaries and on a new generation of artists.”

Alberto Burri: The Trauma of Painting is made possible by Lavazza.

Support is also provided by The Andy Warhol Foundation for the Visual Arts.

Francesca Lavazza said: “Alberto Burri’s birth date of 1915 represents a major moment in Italian history, marking the nation’s entrance into World War I but also the establishment of Lavazza’s longstanding headquarters in Turin. This year Lavazza is proud to celebrate its own 120th birthday with support for this sweeping exhibition of one of the pioneers of modernism, and by joining the Guggenheim in showing Burri and his enduring influence upon the art world on both sides of the Atlantic.”

Burri is best known for his series of Sacchi (sacks) made of stitched and patched remnants of torn burlap bags, in some cases combined with fragments of discarded clothing. Far less familiar to American audiences are the artist’s other series, which this exhibition represents in depth: Catrami (tars), Muffe (molds), Gobbi (hunchbacks, or canvases with protrusions), Bianchi (white monochromes), Legni (wood combustions), Ferri (irons, or protruding wall reliefs made from prefabricated cold-rolled steel), Combustioni plastiche (plastic combustions, or melted plastic sheeting), Cretti (induced craquelure, or cracking), and Cellotex works (flayed and peeled fiberboard). The exhibition unfolds on the ramps of the Guggenheim both chronologically and organized by series, following the artist’s movement from one set of materials, processes, and colors to the next. Throughout his career, Burri also engaged with the history of painting, reflecting his deep familiarity with the Renaissance art of his native Umbria. The exhibition likewise reveals the dialogue with American Minimalism that informed his later Cretti and Cellotex works. In addition, the installation includes an immersive new film commissioned by the Guggenheim Museum. Dutch filmmaker Petra Noordkamp documents Burri’s singular Land art memorial, the enormous Grande cretto (Large Cretto, 1985–89; with its last section completed posthumously in 2014) in Gibellina, Sicily, a town devastated by a 1968 earthquake. An enormous shroud of white cement covers the ruins, and fissures function as pathways that wind through an area of roughly 20 acres. The film captures Grande cretto as an experiential work of art filled with a sense of place and history.

Born in Città di Castello, Italy, in 1915, Burri trained to be a doctor and served as a medic in the Italian army in North Africa during World War II. Following his unit’s capture in Tunisia in 1943, he was interned at a prisoner-of-war camp in Hereford, Texas, where he began painting. After his return to Italy in 1946, Burri devoted himself to art—a decision prompted by his firsthand experiences of war, deprivation, and Italy’s calamitous defeat. His first solo show, at Rome’s Galleria La Margherita in 1947, featured landscapes and still lifes. After a trip to Paris in 1948–49, he began to experiment with tarry substances, ground pumice stone, industrial enamel paints, and metal armatures, and he formed accretions and gashes that destroy the integrity of the picture plane. He then traumatized the very structure of painting by puncturing, exposing, and reconstituting the support. Instead of using the traditional cohesive piece of stretched canvas, Burri assembled his works from piecemeal rags, broken wood veneer, welded steel sheets, or layers of melted plastic—stitching, riveting, soldering, stapling, gluing, and burning his materials along the way. His work demolished and reconfigured the Western pictorial tradition, while transforming the scale and affective power of modernist collage.

Though considered an Italian artist, Burri married an American dancer-choreographer, Minsa Craig, and, beginning in 1963, resided annually in Los Angeles during the winter months. In 1978 the artist established the Fondazione Palazzo Albizzini Collezione Burri in Città di Castello. The Fondazione today operates two museums in his hometown that present artwork he personally installed: the Palazzo Albizzini and the Ex Seccatoi del Tabacco. Exceptionally, the Fondazione is lending two pictures pulled directly from its permanent collection exhibition: Grande bianco (Large White, 1952) and Grande bianco (Large White, 1956). The former is one of three large textile collages that Robert Rauschenberg saw—among other works—in Burri’s Rome studio in early 1953. Those three grand pictures will be reunited in the New York presentation.

In conjunction with the exhibition, the Guggenheim Museum led an in-depth conservation study of the artworks assembled for the retrospective as well as numerous other works from the various series. The study, which involved the efforts of a multidisciplinary team of curators, conservation scientists, and painting, paper, objects, and textile conservators, analyzed the wide variety of original and complex materials and working methods used by Burri in pioneering ways.

Following the presentation in New York, Alberto Burri: The Trauma of Painting will travel to Kunstsammlung Nordrhein-Westfalen, Dusseldorf, from March 5 to July 3, 2016.

Exhibition History
Burri launched his career in Rome but exhibited his work regularly in the United States, beginning in the early 1950s at the Allan Frumkin Gallery, Chicago, and the Stable Gallery and the Martha Jackson Gallery, both in New York. In 1953 Guggenheim Museum director and curator James Johnson Sweeney included Burri in the landmark exhibition Younger European Painters: A Selection, and he wrote the first monograph on the artist (1955). Burri’s awards include a third prize at the Pittsburgh International, Carnegie Museum of Art (1959); Premio dell’Ariete in Milan (1959); UNESCO Prize at the São Paulo Biennial (1959); Critics’ Prize at the Venice Biennale (1960); Premio Marzotto (1965); and Grand Prize at the São Paulo Biennial (1965). Burri’s earliest U.S. retrospectives were organized by the Carnegie Museum of Art, Pittsburgh (1957), and the Museum of Fine Arts, Houston (1963). Other major exhibitions include retrospectives at the Musée national d’art moderne, Paris (1972), and the University of California’s Frederick S. Wight Gallery, Los Angeles (1977); the latter traveled to the Marion Koogler McNay Art Institute, San Antonio, Texas, and the Guggenheim Museum (1978). In 1994 his work was included in The Italian Metamorphosis, 1943–1968, also at the Guggenheim.

Education and Public Programs
A range of public programs—including exhibition tours, Italian neorealist films, and related family workshops—is offered in conjunction with Alberto Burri: The Trauma of Painting. Highlights are listed below, with full information and tickets available at guggenheim.org/calendar.

Dramatic Reading and Panel
Theater of War
Tuesday and Wednesday, October 27 and 28, 6:30 pm
Taking into account Alberto Burri’s experience as a prisoner of war, the Guggenheim hosts Outside the Wire as they present an iteration of their innovative public health project, Theater of War. Esteemed actors Zach Grenier, Amy Ryan, and John Turturro perform dramatic readings of selections from Sophocles’s Philoctetes and Algerian Diary by Vittorio Sereni, a major Italian poet who was also a prisoner of war during World War II. The readings will be followed by a panel discussion and town hall–style forum addressing the various and lasting impacts of war on the human psyche. Cast subject to change. Free with RSVP.

Performance
November Steps
Thursday, November 12, 8 pm
Tom Gold Dance reimagines November Steps, a 1973 ballet choreographed by Alberto Burri’s wife, Minsa Craig, to Tōru Takemitsu’s 1967 composition of the same name, which included set design and costumes by Burri himself. In this rendition, dancers from the New York City Ballet perform on the Rotunda Floor as a projection of one of Burri’s Cretti works gradually comes into formation on the stage beneath them. $40, $30 members, $20 students.

Film
Aesthetics of Poverty: Italian Neorealist Film
Alberto Burri’s work, in its straightforward presentation of materials from life, shares with Italian neorealist film an “aesthetic of poverty” that points to material deprivation in postwar Italy. Four important films from this rich cinematic period are screened on select Fridays. Free with admission.

Exhibition Catalogue
Alberto Burri: The Trauma of Painting is accompanied by a 280-page, richly illustrated scholarly exhibition catalogue that includes a five-chapter essay by Emily Braun; a text by Megan Fontanella on Burri’s early exhibitions and collectors in the United States; and essays on each of Burri’s series, authored by Braun and Carol Stringari, which analyze his methods and materials in depth. The publication is the first major English monograph on Burri, contains a wealth of new research and interpretation, and will be the standard reference on the artist for years to come.