'Begleiter. The Myth of Realism'.The exhibition will encompass several dozen works made from 1993 to today. Rauch's paintings, principally maintained within a bright colour-scheme, present most often figurative scenes playing themselves out on several superimposed surfaces. In his painting is visible the influence of two traditions in German painting: expressionism and symbolism. 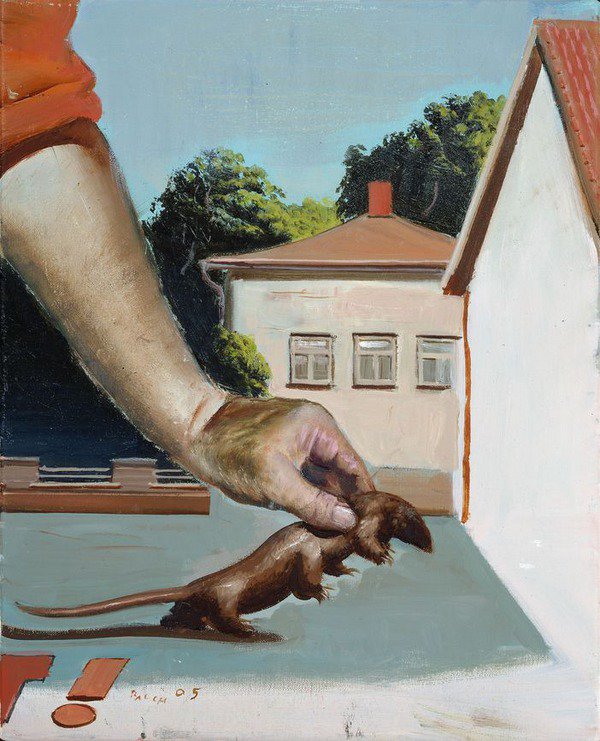 The Neo Rauch exhibition in the Zachęta National Gallery of Art is the first full overview of the painting of an artist who is an outstanding phenomenon of the German and European scene. This show will also be one of the relatively few presentations of German art made in Poland over recent years.

To mark the occasion of Neo Rauch’s 50th birthday, two simultaneous exhibitions dedicated to his work were held from April in the Museum der Bildende Künste Lepizig and also in the Pinakothek der Moderne in Münich. With reference to these, a retrospective of the painter’s work will be held in Zachęta National Gallery of Art in Warsaw. The exceptional quality of Neo Rauch’s painting has up until now not been presented in Poland from such a wide perspective as will be the case in Zachęta. The exhibition will encompass several dozen works made from 1993 to today.

Rauch’s paintings, principally maintained within a bright colour-scheme, present most often figurative scenes playing themselves out on several superimposed surfaces. In his painting is visible the influence of two traditions in German painting: expressionism and symbolism. Neo Rauch’s exceptional position on the art scene is created by the fact that, by drawing on the specificity of German realism, he always succeeds in discovering in European mythology the image of a person and developing it in many diverse ways. He succeeds in connecting concrete contemporary issues with those of fundamental human conditions.

The exhibition under the patronage of Prof. Władysław Bartoszewski, the Minister for International Dialogue of the Polish Prime Minister’s Office and the German Ambassador in Poland, Mr. Rüdigera Freiherr v. Fritscha.

The exhibition will be accompanieb by a richly illustrated Polish-English catalogue with esays by the curator and Mathias Flügge – well-known German art-critic specialized in the Middle-Eastern Europe.

Exhibition under the patronage of Professor Władysław Bartoszewski, Minister for International Dialogue in the Chancellery of the Prime Minister of the Republic of Poland and Mr Rüdiger Freiherr von Fritsch, Ambassador of the Federal Republic of Germany in Poland.

Exhibition supported by the Cultural Foundation of Saxony, the Foundation for Polish-German cooperation, the Ministry of Foreign Affairs of the Federal Republic of Germany and the additional funds of the Polish Ministry of Culture and National Heritage.