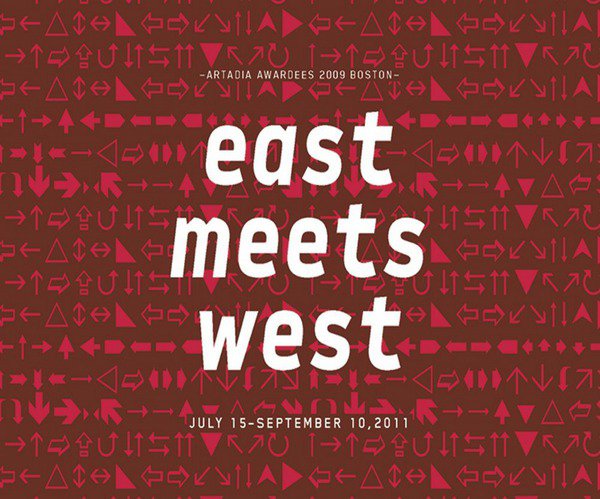 The San Francisco Art Institute is pleased to announce East Meets West, a group exhibition of the Artadia Awardees 2009 Boston, curated by Mary Ellyn Johnson. The show is on view from July 15–September 10, 2011 in the Walter and McBean Galleries on SFAI’s 800 Chestnut Street campus. An opening reception will be held on Thursday, July 14 from 5:30­–7:30 p.m.

East Meets West falls within the New Voices section of SFAI’s Exhibitions and Public Programs department structure. The New Voices initiative and Arcadia share the goal of encouraging young curators, artists, and activists by providing them with spaces and strategies to present their projects. Additionally, the Walter and McBean Galleries strive to present work by compelling artists who may be as-yet-unknown to local audiences.

Claire Beckett: In the series In Training and Simulating Iraq, Beckett provokes people to think about the wars in Iraq and Afghanistan and our responses as a society to these events. In Simulating Iraq, Beckett presents photographs made on military bases within the US, in fabricated spaces designed to mimic Iraq and Afghanistan. The simulations include the use of specific architecture, objects and costumes, and Americans (both civilians and soldiers) who role-play as Iraqis and Afghans.

Ambreen Butt: Working from the rich imagery of mass media and archival resources, Butt’s visual vocabulary references issues of war, violence, resistance, gender, and power struggle. Educated in the tradition of Persian and Indian miniaturist painting, her peripheral interest is in recontextualizing painting in contemporary practice, which she achieves through updating its technical and conceptual processes. In the works Daughter of the East and Dirty Pretty, from two series of the same name, Butt uses evocative female figures to create a complex vision of traditional and contemporary cultures colliding.

Caleb Cole: Cole presents selected work from his Other People’s Clothes series. For this series, Cole creates stories for strangers based on narratives of isolation and desire, imagining their private life and how they construct their identity. Cole then reconstructs these private moments in photographs, beginning with an outfit or piece of clothing (either bought, found, or borrowed), then choosing a location, and finally embodying the character in a silent moment alone.

Raul Gonzalez: For this exhibition Gonzalez will create a site specific mural work titled El Humo Limpia todo excepto… (The Smoke Cleanses everything but…). Inspired by dusty border towns and visions of the Old West, the epic scroll-like mural depicts scenes from violent newspaper headlines, spaghetti westerns, cultural stereotypes, and the samurai prints of Utagawa Kuniyoshi. Decapitated heads, roosters wielding pistols and knives, and an assortment of undesirables litter the landscape that Gonzalez refers to as Tranquilandia. While in residence at SFAI, Gonzalez will participate in workshops with SFAI’s PreCollege students and, on July 12, 2011, with youth at the Mission Cultural Center, where they will create a mural.

Eric Gottesman: In a photographic series entitled Studio Karmen and the video Another Beautiful, Gottesman documents his interaction with photographer Ahmad Karmen in Amman, Jordan, whom he first met in 2006. Ahmad’s photography studio was established in 1970, and he has made his own backdrops for the local residents to pose in front of, including a hand-sculpted recreation of Sefferin, Ahmad’s childhood village in Palestine. Gottesman will give a lecture on August 3, 2011 at SFAI as well as lead a workshop with SFAI’s Young Artist Program students.

Amie Siegel: The centerpiece of Siegel’s three-part work Black Moon is the video Black Moon, a partial remake of Louis Malle’s 1975 film of the same title. The second element is a series of photographs, Black Moon / Hole Punches, derived from the hole punches, or black moons, typically cut by the motion picture laboratory into the first frame of action in a film negative. A third element, the 2-channel video installation Black Moon / Mirrored Malle, places an original 1975 interview with Louis Malle about his film against a shot-for-shot version in which the artist herself plays Malle. Siegel will give the first lecture of the Fall 2011 Visiting Artists and Scholars series on September 7, 2011.

Joe Zane: In the works Wish your way to the Whitney, I’m so fortunate to get to make my art, and Gold Star, Zanereflects upon the experience of receiving an award (Artadia), and takes advantage of the exhibition’s location at an art school to deliver a message to students. The audience is the most important part of Zane’s work, as he examines how one brings meanings to an art object and how an individual defines oneself in reflection of the experience.

Artadia: The Fund for Art and Dialogue

Artadia’s mission is to encourage innovative practice and meaningful dialogue across the United States by providing visual artists in specific communities with unrestricted awards and a national network of support. Founded in 1997 as the Art Council, Inc., Artadia is a 501(c)(3) nonprofit organization. Since 2009, Artadia has run a residency program that brings Artadia Awardees to New York for a three-month residency at the International Studio and Curatorial Program (ISCP). In 2010 Artadia inaugurated an exhibitions exchange program that shows awardees from one city in another Artadia city, giving artists crucial exposure outside of their local communities. This winter Artadia launched its first national publication featuring two years of Artadia Awardees alongside critical essays, guest edited by LACMA’s Franklin Sirmans. Artadia also presents over 50 events annually around the country that demonstrate not only the tremendous creativity in partner communities but also facilitate exchange and dialogue nationwide. For more information, visit www.artadia.org