Six portfolios produced by some of the most significant photographers of the twentieth century: Diane Arbus, Robert Frank, Lee Friedlander, Duane Michals, Robert Rauschenberg, and Garry Winogrand. Five of the portfolios were published in the 1970s, when few individuals or museums were collecting photography or granting the medium validity as an art form. 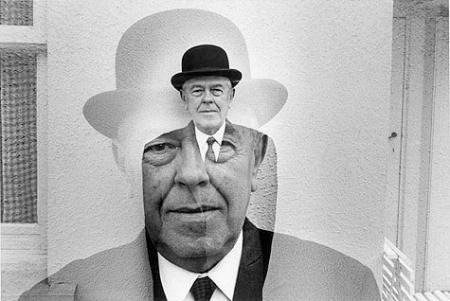 "Wanna See My Portfolio?" plays with the phrase commonly heard by museum and gallery professionals from aspiring artists. The exhibition, however, consists of six portfolios produced by some of the most significant photographers of the twentieth century. Five of the portfolios were published in the 1970s, when few individuals or museums were collecting photography or granting the medium validity as an art form. During that time, photographers could rarely expect to support themselves with print sales. Publishing a portfolio not only offered the promise of financial success from the sale of a group of pictures, but also allowed photographers to more fully convey their artistic vision through a set of images as opposed to a single photograph. In retrospect, the portfolios on view contain some of the most important work these artists ever made. It is a pleasure to present these groups of images as a window into the minds of their creators.

Robert Frank (b. 1924): Composed of six hand-pulled, custom lithographic prints and published in the 1980s, "Portfolio", 1970 presents a singular union of Lure camera snapshots and collage techniques. Frank received a Lure camera in the early 1970s while living in Mabou, Nova Scotia and had the film commercially processed. He then collaged these prints to create an expanded narrative of words and pictures. The original Lure camera collages reside in the collection of the National Gallery of Canada, Ottawa and the offset lithographs included in "Portfolio" are the only way to view the work outside of the museum.

Lee Friedlander (b. 1934): "Fifteen Photographs", 1973 encompasses some of the finest work of Friedlander's early career. His classic images of the American social landscape, depicting shop windows, sidewalks, signs, and often his own shadow, capture the look and feel of modern society through a detached, humorous, and often poignant lens.

Duane Michals (b. 1932): "A Visit with Magritte by Duane Michals", 1965 presents an intimate portrait of Michals's artistic idol, the Surrealist painter René Magritte, in just five images. Forgoing his traditional sequence format, Michals constructed a poetic narrative of Magritte in and around his home in Brussels, often in front of his easel.

Robert Rauschenberg (1925 – 2008): "Portfolio I", 1952 features seven photographs taken by the artist prior to his study with Josef Albers at Black Mountain College in North Carolina, at which time the Bauhaus master encouraged Rauschenberg to pursue painting. The themes and structural elements found in many of Rauschenberg's later paintings are evident in these early images: a horse’s markings evoke abstract brush strokes, while a horizontal self-portrait recalls his iconic 1955 combine, "Bed".

Garry Winogrand (1928 – 1984): "Fifteen Photographs", 1973 contains some of Winogrand's most notable images of zoos, rodeos, and street scenes. Edited by his close friend and fellow photographer, Lee Friedlander, the portfolio is composed of the same number of prints and was published at the same time as Friedlander's own portfolio of the same name.