The Model is transformed into The Tunnel by Omer Fast, where three art installations inhabit The Model building. The first inhabits the atrium, and is an intervention by the artist that is associable with his new film project, 5000 Feet is the Best. The Model co-commissioned this film, which is presented in the East Gallery above as the second installation. 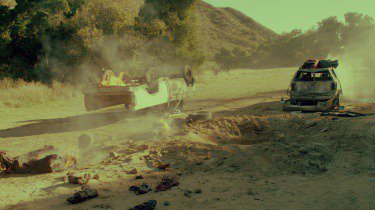 A major solo exhibition by Israeli artist Omer Fast opens on September 3rd at The Model in Sligo. Among the installations on show will be Fast's new work 5,000 Feet is the Best co-commissioned by The Model in Sligo, Dublin Contemporary 2011, the Hermes Foundation and the Kadist Foundation.

The project is based on two meetings with the artist and a Predator drone aerial vehicle operator of American origin. The drone operator agreed to discuss the technical aspects of his job and his daily routine on camera. Off camera and off the record, he briefly described recurring incidents, in which the unmanned plane fired at both militants and civilians in Pakistan and Afghanistan—and the psychological difficulties he experienced as a result—before breaking the interview off.

The interview is repeatedly interrupted by the actor's digressions, which take the viewer on meandering trips around Las Vegas. Told in quick flashbacks, the stories form a circular plot that nevertheless returns fitfully to the voice and blurred face of the drone pilot and to his unfinished story.

Also showing at The Model is Nostalgia a three-part film installation by Fast, which received the National Gallery Prize for Young Art from the Berlin Nationalgalerie, 2009. One film in this installation depicts a migrant from a dystopian Britain seeking asylum in Africa. Adapted from a true story, this narrative is presented alongside an extract of original footage and a dramatization of an encounter between the artist and a person seeking asylum in Britain. Deliberately combining these disparate elements, Fast confronts us with a contemporary recollection of displacement and loss in a film narrative that is set in the future but which appears to have been produced in the past.