In each of his photographs, Dirk Braeckman builds a very subjective vision of reality in which objects, matter and representation are melted: the exhibition features older and new works, including work made especially for it. Hans Demeulenaere and Marc Nagtzaam are cooperating in an exhibition that focuses on space and the experience of space: monumental architecture and drawings. 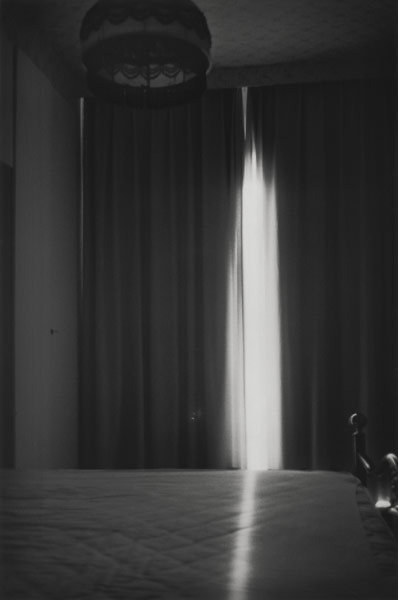 "Perhaps I want to create things that are elusive. And for me photography is the only way to do it. You've got an image in front if you: it's not simply formal, but you can't immediately describe it in any other way. At most you can say what's in it, but that's not what it's about. What I want, in fact, is to arrive at a point where there is nothing more but that image."
—Dirk Braeckman

One of Belgium's leading artists, Dirk Braeckman (°1958) has shown his work in various solo and group exhibitions in his home country and abroad. The exhibition at M comprises a selective overview of his extensive body of photographic works of the last 20 years, juxtaposed with new images, both still and moving. Special attention is paid to the rich textures and materials that endow his art with emphatic tactility and to the different media with which the artist experiments.

In each of his photographs, Dirk Braeckman builds a very subjective vision of reality in which objects, matter and representation are melted. Over the years, the disarming expressiveness of his early biographical (self-)portraits evolved into a more detached and intuitive approach of places filled with collective memories. Nowadays Braeckman captures dazzlingly pure images of anonymous sites, from which the physical presence of people is usually banned. The tonal warmth of the large, dark grey prints augments a gripping sense of enclosure, containment, and spatial vibrancy. The artist considers his pictures to be 'impersonal choices' which have imposed from space. He identifies them with a code, which refers to the locations where the shots were taken. Presented as monumental prints, the works claim their share of exhibition space with emphasis.

Though Braeckman's pictures do not set out to tell a story, they suggest many. In that sense, his work is never definitive. It remains open beyond the moment, beyond the frame. At first glance, the depicted scenes are quite easily identifiable as everyday situations derived from Braeckman's personal environment. But this is not what these images are about. Braeckman is interested in the image itself. In a variety of ways his art tests the limits of the medium. To temper an all too direct link to the motif, the artist generally prefers black-and white photography and a photo paper that renders a tactile effect to the picture's surface. The presence of a blinding flashlight in many of his photographs leads to the inevitable disruption of the illusionary character of the presentation. On other occasions the pixel structure of the pictures enhances the impression of two-dimensionality. Braeckman's deliberate use of blurring, extreme cutting and obscuring of the perspective make for an atmosphere of uncertainty and indeterminacy, sometimes even evolving into the realm of complete abstraction.

For a long time Dirk Braeckman only produced analogue photographs which he printed himself in his darkroom, but in recent years he has also explored digital photography. This new technique has introduced other approaches into his work, enabling him to experiment with different printing methods and to search the borders of monumental photography. Some of these recent, digitally produced works will also be on show in the exhibition.

Publication Dirk Braeckman
An English/Dutch publication is published by Roma Publications, with essays by Martin Germann and Dirk Lauwaert. 384 duotone & colour pages | At the M-shop

Hans Demeulenaere and Marc Nagtzaam
One Show About One Drawing

Hans Demeulenaere (Oostende, °1974) and Marc Nagtzaam (Helmond, NL, °1968) are cooperating in an exhibition at M that focuses on space and the experience of space. Their collaboration at M arose from their common interest in exhibitions and the way exhibitions are documented.

Hans Demeulenaere’s work springs from his fascination for architecture and spatial elements. At M, he presents a monumental sculptural installation that refers to an older exhibition space. Through slideshows and the shades of colour on the walls, he plays with light, space and perspective.

Marc Nagtzaam makes drawings, most often in pencil, either on paper or directly on the wall. His abstract, geometric patterns and drawings always refer to a concrete reality.

The exhibition at M thus combines and juxtaposes monumental architecture and drawing. As a result of the interaction between the two artists, certain works refer to one another while others explore new avenues.

Recent publications about both artists are available in the M bookshop.