For Precious Balls the artist based his new body of work on the various and assorted mini-dramas of fiction and false realities that exist in and revolve around the world of sports. 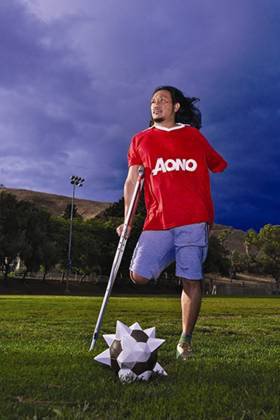 The initial ideas upon which Tetsuji Aono has based his new body of work are the various and assorted mini-dramas of fiction and false realities that exist in and revolve around the world of sports.

“I find that I am not really interested in SPORTS. NOT! I am, however, interested in what people blindly ‘see’ in SPORTS, and also I am fascinated how ‘funny’ people use and abuse SPORTS images which are covertly and overtly run by corporate, financial, political, and religious interests.”

An example cited by Aono is when a not-for-profit organization or corporation sends soccer balls, or some other sports equipment, to impoverished countries in order to not stimulate the country’s economy or the local population's economic well-being, but rather to promote the corporation’s own public perception or their own profit margins. The balls used in sports are not simply equipment or tools, but rather precious promotional commodities that are being given to control minds and perceptions. They are marketing weapons of mass propaganda that are being unleashed on unsuspecting cultures.

The environment that will be presented by Aono in this exhibition will replicate a domestic setting, one in which familiar sports objects and assorted sports memorabilia are made out of ceramics. Carefully crafted mass-appeal objects that are at once alarming, disarming, and seductive.