Moltch. Though there are many forms of Buddhist teachings and philosophies, the artist is focusing on the above mentioned ideas and how these ideas relate to us. 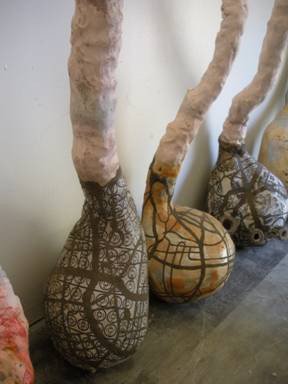 L2kontemporary is proud to present the first solo exhibition at the gallery from Southern California artist Tuan Phan. Tuan will be featuring recent works from his new series titled “Moltch”.

What seems to have always held Tuan Phan’s fascination is the process of decay, such as when metal, left to the elements, begins to rust and break down. Or how mold collects on perishable products over time and the way fungus lives out it’s lifecycle alongside trees. Tuan is drawn to the symbiotic relationship between the fungus and the tree, where the fungus extracts the necessary nutrients from its host, and in return gives back minerals in the form of decomposed matter. He views this process as being similar to ideas in Buddhism; such as reincarnation, passages in the afterlife, and rebirth.

Impermanence and recycle has always been central themes in Tuan’s work; specifically in relation to nature and Buddhist beliefs. Though there are many forms of Buddhist teachings and philosophies, the artist is focusing on the above mentioned ideas and how these ideas relate to us. In the series “Moltch”, Tuan is representing these views in the objects he makes by using materials that are natural and therefore have the ability to encompass decay. Process is also important. The impermanence of the Tibetan monks’ Mandalas, and the precise and arduous methods used in their creation, is a route incorporated in Tuan’s work through the use of sifted dirt that is overlaid on the pieces in patterns of maps.

“Growing up in an environment that practices Buddhism, I have been part of many ceremonies celebrating past ancestors and have come view our physical forms as hollow shells after death has occurred. In these works I am representing vessels that are both vestiges and a means of passages.”