Infoinstallations, an exhibition of new works by Maurizio Bolognini, curated by Enrico Pedrini. The exhibition includes Sealed Computers, some of the artistâ€™s better known works. 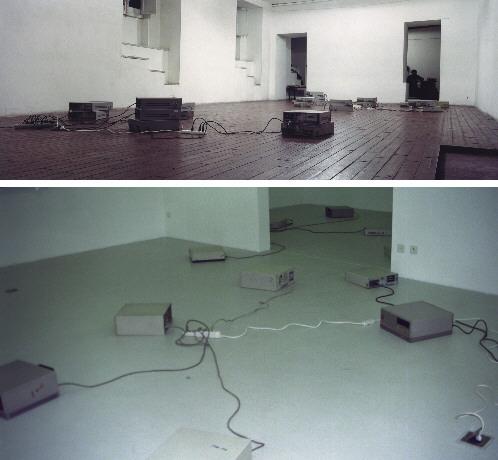 
The Williamsburg Art & Historical Center is pleased to present Infoinstallations, an exhibition of new works by Maurizio Bolognini, curated by Enrico Pedrini. The exhibition includes Sealed Computers, some of the artistâ€™s better known works. Since 1992 the artist has programmed more than two hundred computers to produce continuous flows of random images. He then seals them, so that they do not become connected to a monitor, and finally he leaves them to work indefinitely. In so doing, Bolognini slowly and imperceptibly creates a parallel universe of information. Works from the Varchi or Windows series will also be exhibited. These drawings are forms that are traced by Bologniniâ€™s programmed computers.

SMSMS, an interactive installation by Maurizio Bolognini was recently presented at Artmedia VIII in Paris. SMSMS (SMS Mediated Sublime) uses one of the programs used in the Sealed Computers. The program, which traces white lines on a black background, produces infinite trajectories. In his installation, the images are rendered visible and anyone can modify the software, and therefore the characteristics of the images, by sending an â€œSMS.â€ Each time a new message is received, the system updates the algorithm according to the publicâ€™s wishes and starts elaborating a new cycle of images.

Maurizio Bolognini is one of the most interesting Italian artists working with new technologies. Since the late 1980s, Bolognini has worked with network communication techniques or â€œteledemocracyâ€ and has published several studies including â€œDemocrazia Elettronicaâ€ (Rome, 2001). In his catalog essay for Infoinstallations, Enrico Pedrini discusses the implications of Bologniniâ€™s art which extends cultural boundaries, and maps new territories of language. Infoinstallations also search for a new existential condition by promoting a creative participation in an artfully controlled chaos.