Difference and Desire in American Portraiture. The exhibition includes approximately 100 works in a wide range of media created over the course of one hundred years that reflect a variety of sexual identities and the stories of several generations. It considers how artists have explored the definition of gender, how major themes in modern art -especially abstraction- were influenced by marginalization, and how art has reflected society's changing attitudes. 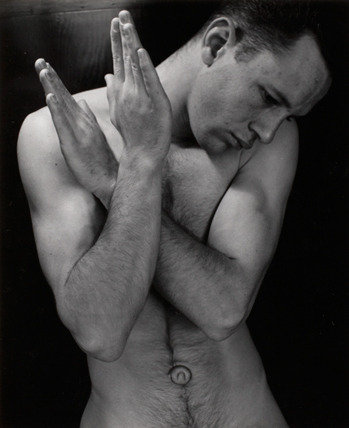 HIDE/SEEK: Difference and Desire in American Portraiture, the first major museum exhibition to explore how gender and sexual identity have shaped the creation of American portrait painting, organized by and presented at the National Portrait Gallery last fall, will be on view at the Brooklyn Museum from November 18, 2011, through February 12, 2012. With the cooperation of the National Portrait Gallery, the Brooklyn Museum has reconstituted the exhibition in concert with the Tacoma Art Museum, where it will be on view from March 17 through June 10, 2012.

HIDE/SEEK includes approximately a hundred works in a wide range of media created over the course of one hundred years that reflect a variety of sexual identities and the stories of several generations. Highlighting the influence of gay and lesbian artists, many of whom developed new visual strategies to code and disguise their subjects’ sexual identities as well as their own, HIDE/SEEK considers such themes as the role of sexual difference in depicting modern Americans, how artists have explored the definition of sexuality and gender, how major themes in modern art—especially abstraction—were influenced by marginalization, and how art has reflected society’s changing attitudes.

Announcing the Brooklyn presentation, Museum Director Arnold L. Lehman states, “From the moment I first learned about this extraordinary exhibition in its planning stages, presenting it in Brooklyn has been a priority. It is an important chronicle of a neglected dimension of American art and a brilliant complement and counterpoint to Youth and Beauty: Art of the American Twenties, a touring exhibition organized by the Brooklyn Museum, also on view this fall.”

In addition to its commentary on a marginalized cultural history, HIDE/SEEK offers an unprecedented survey of more than a century of American art. Beginning with late nineteenth-century portraits by Thomas Eakins and John Singer Sargent, it includes works from the first half of the 1900s by such masters as Romaine Brooks, George Bellows, Marsden Hartley, and Georgia O’Keeffe, the exhibition continues through the postwar periods with works by Jasper Johns, Robert Rauschenberg, Agnes Martin, and Andy Warhol, and concludes with late twentieth-century masterpieces by artists such as Keith Haring, Glenn Ligon, Nan Goldin, Felix Gonzalez-Torres, and Catherine Opie.

The Brooklyn presentation will feature nearly all of the works included in the National Portrait Gallery exhibition. Among them are rarely seen paintings by Charles Demuth, whose better-known industrialized landscapes are on view in Youth and Beauty; a poignant portrait of New Yorker writer Janet Flanner wearing two masks, taken by photographer Bernice Abbott; Andrew Wyeth’s painting of a young neighbor standing nude in a wheat field, much like Botticelli’s Venus emerging from her shell; Robert Mapplethorpe’s photograph riffing on the classic family portrait, in which a leather-clad Brian Idley is seated on a wingback chair shackled to his whip-wielding partner, Lyle Heeter; and Cass Bird’s photographic portrait of a friend staring out from under a cap emblazoned with the words “I look Just Like My Daddy.” The exhibition will also include David Wojnarowicz’s A Fire in My Belly, an unfinished film the artist created between 1985 and 1987, which was removed from the National Portrait Gallery exhibition, sparking a national controversy, demonstrations, and renewed discussions about censorship and artists’ rights.

HIDE/SEEK: Difference and Desire in American Portraiture was originally organized by the National Portrait Gallery, Smithsonian Institution, and has been reorganized by the Brooklyn Museum and the Tacoma Art Museum. The original presentation was co-curated by David C. Ward, National Portrait Gallery historian, and Jonathan Katz, director of the doctoral program in visual studies at the State University of New York in Buffalo. The Brooklyn Museum presentation is coordinated by Tricia Laughlin Bloom, Project Curator.

The Brooklyn presentation is sponsored by Ford Foundation
Other generous support has been provided by The Andy Warhol Foundation for the Visual Arts, Barbara and Richard Moore, The Calamus Foundation, the Robert Mapplethorpe Foundation, the May and Samuel Rudin Family Foundation, Inc., Donald A. Capoccia and Tommie Pegues, Leslie and David Puth, Allison Grover and Susie Scher, and Tom Healy and Fred Hochberg.