Gravitation Zero takes place somehow in a haze, whose atmosphere can be compared to certain of Pina Bausch's choreographies. This work consists of twelve figurines in stopped motion. Their facial expressions are ambivalent, perhaps bringing tidings of good times, perhaps covering up dark secrets. 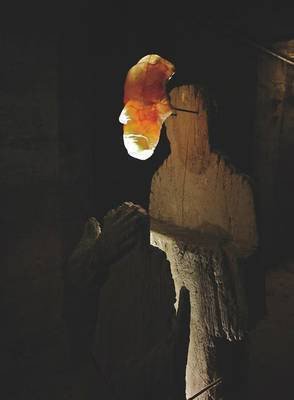 With the exhibition 'Heaven and Hell', the Art Museum of Solingen established its Museum of Persecuted Arts project in 2008. The museum focuses intensively on the life-history of artists, with their persecution and the oppression of their works. The collection of this highly respected German museum contains a range of important works by authors who were victims of historical wrong-doing or who were not indifferent to these stories and who presented their testimony by means of their artistic creations.

These fields also include the work of the multi-media artist Daniel Pešta. In actual fact, two life experiences come together in his work. The first of these is life under communist repression, when the author found himself in social as well as artistic isolation; the second is a reaction to the change of regime and subsequent life in a free world.
In his pictures, resinous objects, 'Genetic Codes', videos or assemblages Pešta touches on these areas of human existence in his own personal manner with neither pathos nor prejudice. Furthermore, he consistently probes the very essence of being, without following any trend, he psychologically analyses individuals and society as a whole, uncovering wrongdoing, exposing the relativity of 'morality'. He knows that between 'heaven' and 'hell' there is only an imaginary glass wall, through which one looks at the other in a single reality.

The Solingen exhibition takes place somehow in a haze, whose atmosphere can be compared to certain of Pina Bausch's choreographies. It is not by chance that Pešta has dedicated one of the main spatial installations, Gravitation Zero, as a homage to this dancer and choreographer, who originated from Wuppertal. This work consists of twelve figurines in stopped motion. Their facial expressions are ambivalent, lit by an inner light, perhaps bringing tidings of good times, perhaps covering up dark secrets.

Last year his works were shown in Felix Nussbaum House/Museum of Cultural History Osnabrück under the title 'Levitation'. The concept of the exhibition and the selection of exhibits have been completely revised and adapted for the Solingen museum. This is also evidenced by the new title: 'Gravitation Zero' with a homage to Pina Bausch.

Daniel Pešta has attended many renowned biennale of contemporary art (Mexico City, Chicago, Florence, Prague) and for his freelance and literary creations has received numerous awards. He is a member of the Czech Artistic Association Mánes, lives and works in Prague and in Frankfurt-am-Main.