In 'The Fifth Business' Luca Frei shows sculptures and installations that orchestrate the space architecturally and brings a bronze pineapple and hourglasses together. The social themes in Frei's work are identity, the measurement of time, control of the body, peer pressure. Lin May and Miriam Schwedt win the Peter Mertes Stipendium 2011, both artists find their way to an analytical and, at the same time, a poetic pictorial vocabulary. 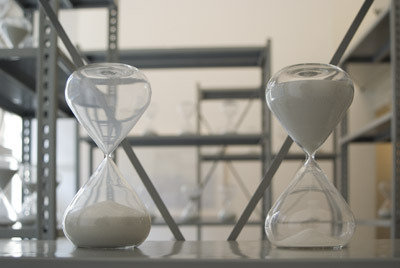 We are happy to call your attention to the first solo exhibition of LUCA FREI (*1976, Lugano) in Germany. The expression Fifth Business refers to a specific kind of character in classical drama who is neither the hero, the confidant, the rival nor the villain.
Although he plays only a supporting role, he brings a key element into the plot. This term taken from literary theory assumes a central role in Robertson Davies’ eponymous novel to which LUCA FREI refers in the title of his show. The Swiss artist lives in Malmö where he teaches at the art academy. His works have been presented in numerous group exhibitions (Kunstsammlung NRW/Düsseldorf, Moderna Museet/Stockholm, MKHA/Antwerp or Kunsthalle Zurich, etc.). In his first solo presentation in Germany, FREI shows sculptures and installations that orchestrate the space architecturally and, among other things, brings a bronze pineapple and hourglasses together.

An apparent heterogeneity marks the exhibition; however, the medium of the drawing forms a starting point for most works, whether sculptures or wall reliefs. An oversized ring hangs in the space and serves as a display system for photocopies of drawings, which the visitor can leaf through. In the room, freestanding metal structures are formally based on graffiti in which the letters resemble dancing figures. These linear sculptures, whose proportions recall silhouettes, merge into a multipart unit that unfolds between body and text. FREI uses the drawing as a notation system, but doesn’t show it as such in the exhibition.

On a wall, a circular line has been drawn. A rope hangs from a nail at its center: traces of an action that lies in the past. Action scenarios and time experience are essential aspects of the exhibition. Each visitor can, for instance, activate one of the many hourglasses from the work The Sun 24 Hours and thus make the time spent in the exhibition visible to others. However, the handblown hourglasses show slight variations that preclude the possibility of an exact measurement of time. The installation depicts the existence of multiple times that often diverge and sometimes contradict each other. The hourglasses’ original packing material is made up of pages from the financial newspaper Il Sole 24 Ore and gives the work its title. It is related to another newspaper that came about within the framework of the exhibition and is made available for visitors to read in the show. The exhibition creates a stage for a potential action, by which fixed structures and the uncanny can meet up. An oversized apron suggests the existence of giants, while the drawing on its front shows a creature in a skyscraper costume assaulted by crocodiles-dogs. This surreal object seems both accurate and erratic, as do other works in the hall.

The visual level of this exhibition plays out between joyful naivety and subtle materiality. The social themes that are found in FREI’s work—identity, the measurement of time, control of the body, peer pressure—are addressed repeatedly in a seemingly harmless, clueless way that, not least of all, is also innate to self-irony.

In 1985 the Peter Mertes Wine Cellar in Bernkastel-Kues awarded their art grant for the first time, which has since become a recognized award in the Rhineland. The 2011 jury (Prof. Dr. Anne- Marie Bonnet, Dr. Gregor Jansen, Matti Braun, Christina Végh) chose LIN MAY (*1973 in Würzburg, lives in Berlin) and MIRIAM SCHWEDT (*1985 in Marktredwitz, lives in Düsseldorf), each of whose work is as different as it also stands on its own. While SCHWEDT’s photographs develop from a confrontation with the medium, MAY’s works evolve from an engaged outlook; both artists find their way to an analytical and, at the same time, a poetic pictorial vocabulary. A catalogue will be published on the occasion of the exhibition.

In her work—texts, drawings, sculptures and silhouettes—LIN MAY calls into question people’s dealings with each other and especially with animals. In Bonn, Tony Cragg’s master-class student shows—besides a relief of Styrofoam—lit-up silhouettes made of large sheets of black paper and colored transparent paper. In a playful way her motifs are woven into allegorical narratives that are marked by a critical view of civilization. Currency signs and exchange-rate diagrams in, for example, Nagheoleed, 2010/11, flank the “Neolithic revolution” and link depictions reminiscent of cave paintings with system-critical discussions on the present. Concretely but also equally poetically, May’s engaged works shine light on the power structures and prompt the viewers to renew their thinking and actions. In her exhibition catalogue Recipes from Iraq, the artist does without photographs of her works and instead has vegan recipes printed.

And the works of the second fellowship winner is just as many-layered and reflected. Despite the number of photographic processes for generating pictures today, MIRIAM SCHWEDT concentrates on the possibilities offered by analog black-and-white photographs and produces her own prints in a lithoprint technique. The one-of-a-kind photos that emerge possess their own personal stillness: The finely shaded hills of the American landscape seem enticingly vast and eternal, and in the shots of a nightly construction site, the derricks seem to be performing a surreal dance. Besides these poetic characteristics, the works by SCHWEDT—who just finished her studies at the Kunstakamie Düsseldorf with Christopher Williams—feature a conceptual interest. For example, by lighting up a group of trees in an extreme contrast or closeup, the branches turn into abstract ornaments, to fine lines or an allover structure. The idiosyncrasies that appear in the developing process tempt the viewer, while passing over the picture surface, to enter deeper into the small-scale works. In many ways SCHWEDT reflects on the parameters of early photography and formulates her own, anachronistic-contemporary moments of timelessness.