Painting as action. The exhibition explores the rich and complex cross fertilisations and of painting, performance and conceptual art from late 1940's until today. The exhibition will include works in different mediums by some 45 artists as Allan Kaprow, Jackson Pollock, Niki de Saint Phalle, Yves Klein. 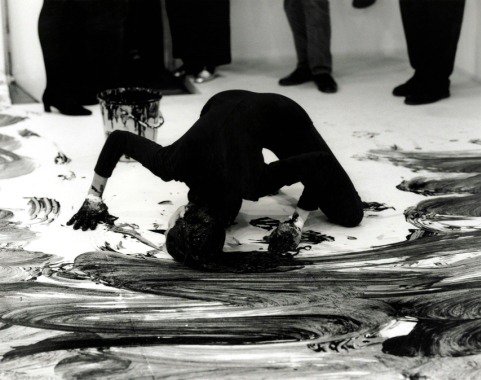 Kazuo Shiraga painted with his feet, suspended by ropes above the canvas, Andy Warhol or his assistants urinated on the canvas, Shozo Shimamoto hurled paint-filled glass bottles at his paintings, and Niki de Saint Phalle fired a rifle at her panels that she had prepared with balloons of paint under layers of plaster. The major exhibition this summer, Explosion, features works by some 50 artists from the late 1940s to today.

After the Second World War, many artists wanted to start from scratch by attacking painting, which was seen to represent artistic conventionality. Moderna Museet’s exhibition Explosion takes off where modernism ends; when it was so ripe that it was on the verge of exploding. Which it did, in the form of a variety of new ways of making art. Practically every door was opened with an aggressive kick, and a new generation of artists began seeing themselves not as painters or sculptors but simply as artists, who regarded all materials and subjects as potential art. That is how the American artist and writer Allan Kaprow, the man who invented the word “happening”, described the situation in 1956 in his now legendary The Legacy of Jackson Pollock. Even if doors were opened to all techniques, much of the new art – happenings, performance and conceptualism – sprang from new approaches to painting. There was a development, a shift of focus, from painting as an art object and as representation, to the process behind the work, to the ideas that generate art, and performative aspects.

“In Explosion we want to explore the performative and conceptual elements in painting, and the painterly elements in conceptualism and performance,” says exhibition curator Magnus af Petersens.

The exhibition follows a theme that runs from Jackson Pollock’s drip paintings, via John Cage’s fascination for chance as a method for creating art, to performance and contemporary conceptual approaches. For the first time in Sweden, this exhibition also presents the Japanese artist group Gutai (1954-1972), which operated in radical ways in the borderland between painting and performance, anticipating many later artistic practices and strategies such as conceptualism, land art and installation. In Europe they exhibited together with artists from the nebulous artist group Zero, also featured in Explosion with works by the co-founders Günther Uecker and Otto Piene and others.

Explosion shows works from the late 1940s to today, by some 50 artists from all over the world, in an attempt to put the American-European art canon in a broader context. The exhibition comprises paintings, photos, videos, performance, dance and audio works, instructions and pieces that invite audience participation. Since the exhibition includes action rather than focusing exclusively on painting, performance and documentations of performance are a vital part of the material that is presented, not least the early photographs of Jackson Pollock and Yves Klein in their performance-like painting acts, which have provoked many artistic comments, including works by Lynda Benglis and Janine Antoni, who are featured in Explosion. This group exhibition is both historical and contemporary, it adheres to no particular style or ism, and is not confined to a geographically limited art scene, but reveals the kinship between apparently unrelated artistic approaches.

Explosion! Painting as action was produced by Moderna Museet and will tour to Fundació Joan Miró in Barcelona in autumn 2012.
The exhibition is supported by Scania.

Press preview on 30 May at 11 am - 13 pm. Introduction by the director of Moderna Museet, Daniel Birnbaum, co-director Ann-Sofi Noring, and the curator Magnus af Petersens.