Reality machines. His works are in dialogue with ecology, architecture and urban spaces, but also with philosophy and science. The show present Eliasson's unusually expansive artistic output, letting his installations fill both museum buildings. 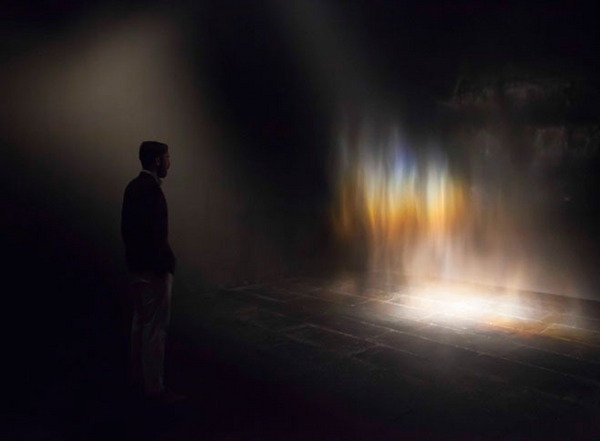 On 3 October, 2015, Moderna Museet and ArkDes, the Center of Architecture and Design open their extensive exhibition on Olafur Eliasson, one of the most influential contemporary artists today. Although Eliasson’s work has been exhibited all over the world, this is the first time his oeuvre has been featured in a major museum presentation in Stockholm. Eliasson explores the spaces in which we dwell, with works ranging from unassuming sculptures to larger architectonic structures. Olafur Eliasson’s works are in dialogue with ecology, architecture and urban spaces, but also with philosophy and science. Thus, it is only natural for the neighbouring institutions Moderna Museet and ArkDes to present Eliasson’s unusually expansive artistic output, letting his installations fill both museum buildings.

“I strongly believe that it isn’t necessary to polarise the fields of art and architecture. Rather, it’s about trying to transgress the traditional boundaries to create a space of inclusion and hospitality, where differences of opinion are not only tolerated but encouraged. When you enter my exhibition, you do not step out of the city of Stockholm and into the protected world of art, but continue the processes of negotiation and co-production that characterise our shared reality.”
Olafur Eliasson

Olafur Eliasson (born 1967, Iceland/Denmark) is based in Copenhagen and Berlin, where Studio Olafur Eliasson employs some 90 staff members. Eliasson’s practice encompasses sculpture, painting, photography, film, installations, architectural projects and site-specific works in public spaces.
The exhibition Olafur Eliasson: Verklighetsmaskiner/Reality machines spans his entire career so far, from the early 1990s to today. Perception is central to the art of Olafur Eliasson. The works draw our attention not only to what we see, but to how we see, or, in the artist’s own words: “seeing yourself seeing”.

“Olafur Eliasson shifts our focus from the art object itself to the actual experience of seeing. His installations are optical instruments that make us see the world around us in different ways. The works become machines that produce new realities," says Matilda Olof-Ors, exhibition curator.

The exhibition starts with the work Model room (2003), a landscape of three-dimensional geometric objects, some of which were further developed and later realised in architectonic installations and pavilions. Nature, via phenomena such as wind and water, is examined by Eliasson in several installations, as material rather than as theme. In the work Moss wall (1994) that appears in the first room of the exhibition, one of the walls is covered by a dense carpet of reindeer moss. Instead of depicting nature, its flora has literally entered the institution. The same mindset is found in ecology and in the relatively new discipline known as object-oriented ontology. It calls into question a long-dominant anthropocentric view, in which mankind has established its superior position at the expense of animals and nature.

Eliasson gives light and colour the same significance as more physically tangible materials. Optical phenomena are investigated and examined. In Room for one colour (1997), a room is filled with a yellow mono-frequency light in which the eye can only distinguish yellow and black. When the viewer leaves the yellow room, an after-image in the complementary colour (blue) remains on the retina. The phenomenon is fleeting and fades away after the initial exposure. The work exists not only inside the room but is assimilated by the viewer.

Movement in various forms characterises many of the exhibition’s installations. Sometimes movement is an inherent part of the work, as in Ventilator (1997), where a fan circulates in irregular ellipses above the visitors’ heads. In other works the components are static, and the viewer’s own movements take centre stage, as in Beauty (1993) where the perception of the work is entirely dependent on viewer’s position in the room. In some cases viewers move through the work, as in Seu corpo da obra (Your body of work) (2011). In this installation, monochromatic colour filters create semi-transparent walls that float in the room. A labyrinthine architecture of coloured space is created. Through the viewer’s movements in the room, the filter’s three colours – magenta, yellow, and cyan – can be seen overlapping in a variety of configurations as various hues emerge in the viewer’s vision.

In conjunction with Olafur Eliasson: Verklighetsmaskiner/Reality machines, a richly illustrated catalogue designed by Irma Boom, with essays by Matilda Olof-Ors and Timothy Morton and a conversation between Olafur Eliasson and Daniel Birnbaum, will be published in mid-November, 2015, by Moderna Museet in association with Koenig Books.

Olafur Eliasson: Verklighetsmaskiner/Reality machines was organised by Moderna Museet in association with ArkDes, Centre of Architecture and Design.

The exhibition is supported by Bank of America Merrill Lynch and Clear Channel.