The Window in Art since Matisse and Duchamp. The 100 paintings, drawings, objects, sculptures, photographs, and projections featured in the exhibition. It exemplify the astonishing variety and diversity of the pictorial models proposed between 1912 and the present. The presentation strikingly documents the use to which the artists put their new-won freedom. 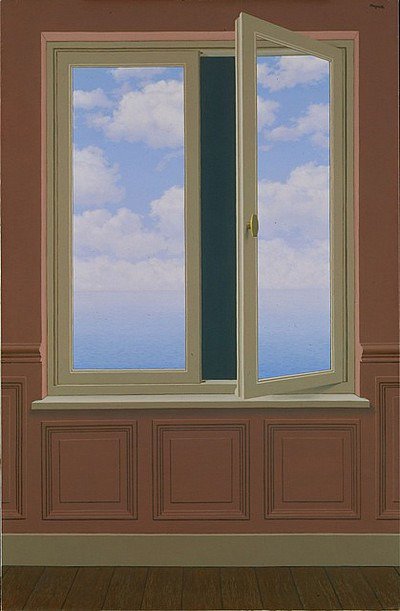 For centuries, the window has been found among the most favored artistic motifs. The picture of a "room with a view" in which the window marks the threshold between exterior and interior has long fostered reflections on the medium of painting itself. The observation that a painting resembles a view through an open window dates all the way back to 1435, when it entered a treatise on painting written by the Renaissance scholar Leon Battista Alberti. He coined a metaphor which has for centuries shaped our understanding of the picture which is organized according to the rules of central perspective and which – like a window – reveals to us a delimited segment of the world.

While the window remained a favored motif in the 20th century as well, it appeared now more frequently in isolation, deprived of any connection to architectural settings or landscape views, and shorn of figures shown from the back gazing longingly into the distance. In their window paintings, Robert Delaunay, Henri Matisse, and Josef Albers experimented with a pictorial form that is no longer devoted solely to depicting reality, and which instead emphasizes the planarity of the picture support while concentrating on color and line and their interaction. In 1920, with his reproduction of a set of French windows, their panes lined with black leather and hence rendered opaque, Marcel Duchamp bid an adieu that was as laconic as it was striking: bearing a title which plays on the words "French window". Fresh Widow announces programmatically the loss of a view through the picture while opening up a path toward the new. Now, the window goes blind or even shatters, as in pictures by René Magritte. To an increasing extent, it refuses any access to the world outside, instead ceding space to a new pictorial reality.

Beginning in 1950, artists such as Ellsworth Kelly, Eva Hesse, Robert Motherwell, Gerhard Richter, Christo, Isa Genzken, Brice Marden, Günther Förg, Toba Khedoori, Jeff Wall, Sabine Hornig, Olafur Eliasson and Jochem Hendricks have devoted intensive working phases to fundamental questions and phenomena whose points of departure are found in the motif of the window. These themes include the reductive shape of the window and its formal similarity to the grid and the framed panel painting; the framing and hence channeling of the viewer‘s gaze; transparency and mirroring, light and shadow; the interpenetration of volume and surface, and finally, emancipation from all forms of materiality.

The 100 paintings, drawings, objects, sculptures, photographs, and projections featured in the exhibition Fresh Widow. The Window in Art since Matisse and Duchamp exemplify the astonishing variety and diversity of the pictorial models proposed between 1912 and the present. The presentation strikingly documents the use to which these artists put their new-won freedom.

The exhibition is realized with the kind support of Kunststiftung NRW and Stiftung Kunst, Kultur und Soziales der Sparda-Bank West.

The exhibition is accompanied by a comprehensive program with lectures, films and guided tours.