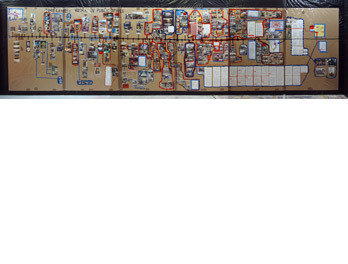 New York, NY—The Dia Art Foundation is pleased to announce that in fall 2012 it will present a new, large-scale collage by Thomas Hirschhorn at 541 West 22nd Street, the site of the future Dia:Chelsea project space. On view from September 15 through November 3, 2012, Timeline: Work in Public Space will comprise a 30-foot horizontal line of images, written statements, and text excerpts chronicling Hirschhorn’s interventions at urban and rural sites from 1989 to 2011.

By showing the trajectory of the artist’s past work, Timeline will both add to the appreciation of Hirschhorn’s existing practice and help prepare audiences for a future work that he will create in public space. In summer 2013, Dia will present Gramsci Monument, a temporary “Presence and Production” project dedicated to the writer and political theorist Antonio Gramsci (1891–1937), which Hirschhorn will construct outdoors in the Bronx or at another location in New York City.

The projects featured in Timeline all reflect Hirschhorn’s inquiry into questions pertaining to sculpture in public spaces, such as site, monumentality, duration, impermanence, and “le précaire” (the precarious). They incorporate cardboard, paper, photos, photocopies, and tape covered by transparent paper—materials that Hirschhorn has integrated into his artistic vocabulary, granting them both symbolic meaning and properties of “le précaire.” Reminiscent of earlier works by Hirschhorn that dealt with archeology in the form of schemas and maps, Timeline returns to the idea of the “interconnectivity” implied in the artist’s tracing of links and relationships across time, as well as repeated strategies and motifs.

Thomas Hirschhorn stated: “I love making collages. It is simple to make one and collages are direct and have immediacy. I want to make collages that are evidence in themselves.”

The presentation of Timeline will differ from a typical exhibition in providing insight into Dia’s commission of Gramsci Monument. This site-specific project will be the fourth and final realization of Hirschhorn’s Monument series dedicated to philosophers, which has included works devoted to Baruch Spinoza (in Amsterdam, in 1999), Gilles Deleuze (in Avignon, in 2000), and Georges Bataille (in Kassel, in 2002).

“It is unique that an artist, in the 21st century, has the urgency to create a timeline of his own work and production, and take on the role of historian,” said Yasmil Raymond, curator, Dia Art Foundation. “As we prepare for Hirschhorn’s final Monument, we can use Timeline to discuss his conception of work in public space and understand the thinking that prompted him, in the beginning of his artistic career, to present his work on the streets, outside of museums and galleries, as well as how it has evolved over time and informed other aspects of his practice.”

Dia will relaunch its Discussions in Contemporary Culture series with a conversation between Thomas Hirschhorn and Hal Foster, Townsend Martin '17 Professor of Art and Archaeology at Princeton University, on Saturday, September 15, at 6:30 pm, at Dia:Chelsea. (For details and reservations, visit www.diaart.org/hirschhorn.) This ongoing series will invite distinguished and diverse artists, scholars, journalists, and historians to engage in a critical debate on current conditions, preoccupations, and explorations occurring in contemporary artistic practice that parallel the culture at large. Dia had previously presented Discussions in Contemporary Culture from 1983–95 in Chelsea.

From September 14 through October 20, 2012, Thomas Hirschhorn's Concordia, Concordia will be on view at Gladstone Gallery in New York City. For more information, visit www.gladstonegallery.com.

Thomas Hirschhorn
Thomas Hirschhorn was born in 1957 in Bern, Switzerland. He studied at the Schule für Gestaltung, Zürich, from 1978 to 1983 and moved to Paris in 1984, where he has been living since. His work has recently been exhibited at venues including the Bienal de São Paulo (2006), Carnegie International (2008), and the Swiss Pavilion at the Venice Biennale (2011). Hirschhorn has received numerous awards and prizes, including the Preis für Junge Schweizer Kunst (1999), Marcel Duchamp Prize (2000), Rolandpreis für Kunst im öffentlichen Raum (2003), Joseph Beuys Prize (2004), and the Kurt Schwitters Prize (2011).

Dia Art Foundation
A nonprofit institution founded in 1974, Dia Art Foundation is renowned for initiating, supporting, presenting, and preserving art projects. Dia:Beacon, Riggio Galleries opened in May 2003 in Beacon, New York, on the banks of the Hudson River as the home for Dia’s distinguished collection of art from the 1960s to the present. Dia:Beacon, which occupies a former Nabisco printing factory, features major installations of works by a focused group of some of the most significant artists of the last half-century, as well as special exhibitions, new commissions, and diverse public and education programs. Dia also maintains long-term, site-specific projects. These include Walter De Maria’s The New York Earth Room (1977) and The Broken Kilometer (1979), Max Neuhaus’s Times Square (1977), Joseph Beuys’s 7000 Eichen (7000 Oaks) (1988), and Dan Flavin’s untitled (1996), all in Manhattan; the Dan Flavin Art Institute in Bridgehampton, New York; De Maria’s The Vertical Earth Kilometer (1977) in Kassel, Germany; Robert Smithson’s Spiral Jetty (1970) in the Great Salt Lake, Utah; and De Maria’s The Lightning Field (1977) in Quemado, New Mexico.

Dia:Chelsea is located on West 22nd Street in the heart of New York City’s gallery district, which the institution helped to pioneer. It is currently open for temporary installations, artist lectures, and readings. Dia’s new project space on West 22nd Street is set to open in late 2016/early 2017. For additional information, visit www.diaart.org.