Furniture. In this exhibition, Wieser presents an ensemble of drawings, ceramic and wooden sculptures, and a spatial intervention where the walls of the cabinet rooms are covered with black-and-white prints of interiors, creating an illusionistic perspective. 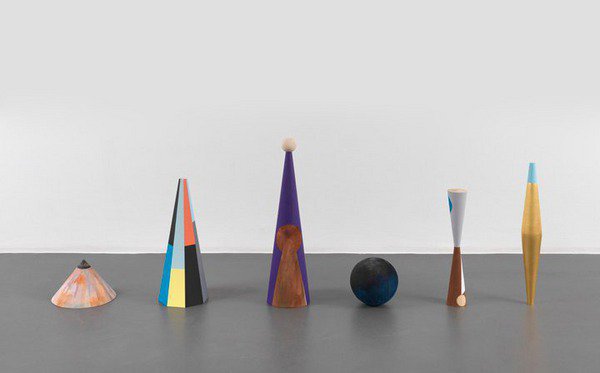 KIOSK opens this season with Furniture, a solo show by Berlin-based artist Claudia Wieser (°1973, Freilassing, Germany). In this exhibition, Wieser presents an ensemble of drawings, ceramic and wooden sculptures, and a spatial intervention where the walls of the cabinet rooms are covered with black-and-white prints of interiors, creating an illusionistic perspective.

Wieser’s visual style is marked by an abstraction that is precise and consistent in its form, colour and materials. Like abstract paintings, Wieser’s glazed ceramic tiles consist of geometric patterns. In one case, these are combined to form a large sculpture that is placed in the hemicycle room like a free-standing folding screen. Surrounding the screen are wooden sculptures that are made up of elementary shapes like cylinders, cones and spheres. There is a thematic and pictorial resonance between the spatial intervention and the series of framed drawings and photographs overlaid with geometric compositions in gold leaf and pencil.

These pure studies in form and colour are indebted to the early twentieth-century Bauhaus legacy. Parallel to the teaching methods of this school, Wieser employs craftsmanship and a subjective palette in her attempt to attain an autonomous pictorial aesthetics in which functionality, art and spirituality are tightly interwoven. Her artistic research is based on complex references and universal, stylistic elements from art history. It appropriates the formal rules of early modernist artworks and questions their objectivity, realism and functionality.

This method and the title of the exhibition also point us to the central concern of Wieser’s current work: what is the status of sculptures that have been designed as objects? Wieser’s oeuvre is developed in response to this question and it explores the boundaries between pure and applied forms of art. The artist intensifies the primary relations between form, matter and concept in order to bring out the pure appearance of the image itself. Only then the internal nature of the object can be externalized.