Thomas Bayrle: will be presented selection of prints from early '70s till the most recent ones, together with some of the early animated films and installations with PVC 'raincoats', as well as a new and especially realised work for this occasion. In concomitance and in dialogue with Thomas's work will be presented series of art-documentaries that Helke Bayrle has been doing over the years. 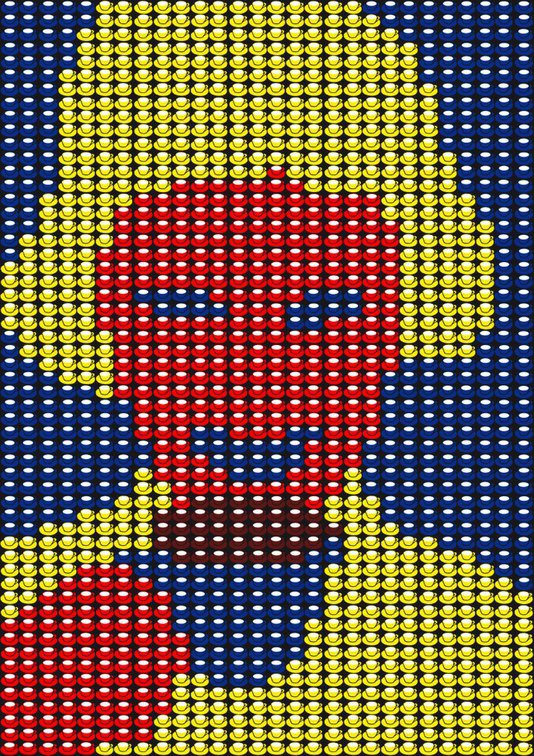 Thomas Bayrle can be considered as one of the most significant German artists, a representative of a European critical response to the American Pop-Art, similarly as his famous compatriots Sigmar Polke and Gerhard Richter. The artist was classified to an outstanding group of 300 exhibitors this year's edition of the international contemporary art show Documenta in Kassel. The thirteenth edition of the festival, held every five years since 1955, is next to the Venice Biennale, the most important event of the international contemporary art circuit, at the same time it is the most prestigious cultural events 2012 in Europe.

Since mid ‘60s he has been creating manually and through the use of the modest means, such as drawing and collage, complex visual and graphic patterns denominated “Superstructures”: images of strong, almost hypnotic and dizzying visual impact which he constructed through the process of obsessive repetition of motives taken from the popular and commercial visual vocabulary. Very involving and seductive, on the closer look his works not only reveal strong sense of humour, but also deep involvement in political and social problematic. As witness of frenetic post-war economic boom of the West, of absurdness of the Cold and Vietnam War, or of bitter disillusion with leftist ideologies, since the mid ‘60s till today Bayrle has been depicting the contemporary world underlining its most common, and at the same time, its most insane features: overproduction, overconsumption, overpollution, overpopulation, overexploitation...

These hypertrophic processes, which continue to accelerate day after day, echo through the mesmerizing patterns which Thomas Bayrle creates superposing bodies and machines, organic and artificial landscapes with unique graphic ability. Be it drawings, prints, wall-papers, clothes, sculptures or all of this installed together, his works are like the essence of the spirit of our times: they accurately depict seductive and destructive power of our capitalistic civilisation.
In CoCA Torun will be presented selection of prints from early ‘70s till the most recent ones, together with some of the early animated films and installations with PVC “raincoats”, as well as a new and especially realised work for this occasion.

In concomitance and in dialogue with Thomas’s work will be presented series of art-documentaries that Helke Bayrle has been doing over the years. She has been documenting activity of Portikus, one among most experimental art institutions, connected with art academy (Städelschule - Staatliche Hochschule für Bildende Kunste) in Frankfurt and out of this involvement she edited a film-series entitled “Portikus Under Construction” featuring artists like Francis Alÿs, John Baldessari, Janet Cardiff, Maurizio Cattelan, Olafur Eliasson, Michael Elmgreen & Ingar Dragset, Yona Friedman, Gilbert & George, Pierre Huyghe, Gordon Matta-Clark, Cildo Meireles, Paulina Olowska, Yoko Ono, Philippe Parreno, Tobias Rehberger, Jason Rhoades, Martha Rosler, Tomas Saraceno, Simon Starling, Rirkrit Tiravanija and many others. This films will be presented within the exhibition and selection of them will be screened within PRZEProject events.

Both of artists will deliver a lecture about their work and will be engaged in a workshop activity together with students and young artists of PRZEProject, since both of them have been and still are very involved in art-education activities.

Thomas Bayrle, born in 1937, lives and works in Frankfurt am Main, Germany. Bayrle taught at the Academy of Fine Arts, Stadelschule in Frankfurt from 1975 to 2002. He has received several awards and prizes including the Prix Arts Electronica, Linz (1995) and the Cologne Art Prize (2000). Bayrle's work has been shown internationally in over thirty solo exhibitions and more than hundred group shows, including important manifestations such as Documenta III, VI and XIII in Kassel and many other biennials all over the globe.

Exhibition will be realised in collaboration with MMK - Museum für Moderne Kunst Frankfurt am Main.