Three solo exhibitions. The opening of the spatial axis is on the ground floor, which draws together specific works by each artist in the exhibition: a sculpture by Rosa Barba, a sculpture-based installation by Adel Abidin, and a 16mm film by Runa Islam. 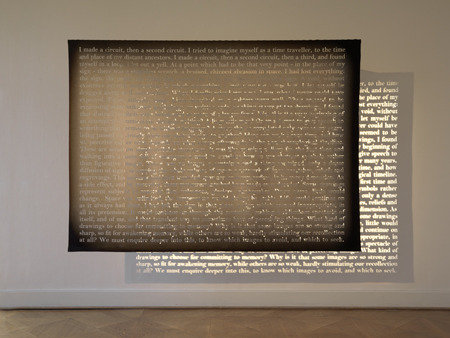 "The Move" involves three solo exhibitions: "beyond..." by Adel Abidin, "annotations" by Rosa Barba, and "dogs devouring horses" by Runa Islam. Each exhibition has its own distinct features and should be considered in their own context. Nevertheless, the curatorial methodology for this exhibition has been based on a calculated structure that extended its territories by referring to the game of chess.

Starting from the basic notions of visual and aural perception, strategies of spatial and perceptual transformation, and constructions of conceptual territories, the project has found its way by exploring and building on the work of three different artists, that constitute diverse areas of artistic research. Therefore, the works of Adel Abidin, Rosa Barba, and Runa Islam have framed the borders of "The Move" as an exhibition.

The curatorial development of the project has two axes: conceptual and spatial. The conceptual axis focuses on drawing the works together, which are closely linked in terms of their subject matter and perceptual inquiries. This axis is based on a collaborative act with each artist involving different layers and intensities. The conceptual axis maps the positional plays between time and sound; light and sight; movement and strategy; and perception and points of view. Whereas, the spatial axis has traced the way in which each artist makes moves and considers spatial conditions through the content and presence of these works.

The opening of the spatial axis is on the ground floor, which draws together specific works by each artist in the exhibition: a sculpture "I Made a Circuit, then a Second Circuit" (2010) by Rosa Barba, a sculpture-based installation "Symphony" (2012) by Adel Abidin, and a 16mm film "Be The First To See What You See As You See It" (2004) by Runa Islam.
The line of this spatial axis has a sequence of moves that continues into Arter's upper floors. The first floor presents the video screening part of Adel Abidin's "Symphony" (2012), "Hopscotch" (2009), and "Three Love Songs" (2010), framed in the "beyond..." exhibition. In "beyond…", the exhibition space is modified with architectural elements based on the requirements of the works, whereas on the other floors the architectural adjustments are minimal, allowing the viewer to identify the spatial characteristics of the building. Accordingly, the location of the works breaks the symmetry of the perception of the identical exhibition spaces. The second floor presents four works by Rosa Barba under the title "annotations": "Coupez Ici" (2012), "The Hidden Conference: On the Discontinuous History of Things We See and Don't See" (2010), "Recorded Expansions of Infinite Things" (2012) and "Invisible Act" (2010). Finally, Runa Islam's exhibition "dogs devouring horses" on the third floor is named after her work "Emergence" (2011) which the exhibition features, along with "This Much is Uncertain" (2009-2010) and "Cabinet of Prototypes" (2009–2010).