Manipulated Photography Before Photoshop. Featuring some 200 visually captivating photographs created between the 1840s and 1990s in the service of art, politics, news, entertainment, and commerce, the exhibition offers a provocative new perspective on the history of photography as it traces the medium's complex and changing relationship to visual truth. 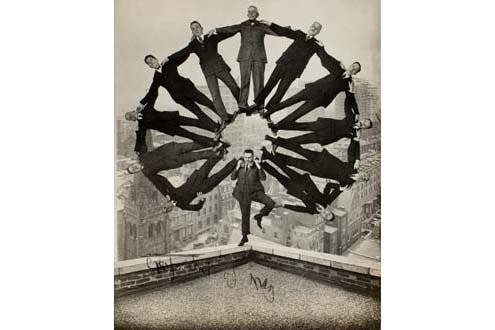 While digital photography and image-editing software have brought about an increased awareness of the degree to which camera images can be manipulated, the practice of doctoring photographs has existed since the medium was invented. Faking It: Manipulated Photography Before Photoshop at The Metropolitan Museum of Art is the first major exhibition devoted to the history of manipulated photography before the digital age. Featuring some 200 visually captivating photographs created between the 1840s and 1990s in the service of art, politics, news, entertainment, and commerce, the exhibition offers a provocative new perspective on the history of photography as it traces the medium’s complex and changing relationship to visual truth.

The exhibition is made possible by Adobe Systems Incorporated.

The photographs in the exhibition were altered using a variety of techniques, including multiple exposure (taking two or more pictures on a single negative), combination printing (producing a single print from elements of two or more
negatives), photomontage, overpainting, and retouching on the negative or print. In every case, the meaning and content of the camera image was significantly transformed in the process of manipulation.

Faking It is divided into seven sections, each focusing on a different set of motivations for manipulating the camera image. “Picture Perfect” explores 19th-century photographers’ efforts to compensate for the new medium’s technical limitations—specifically, its inability to depict the world the way it looks to the naked eye. To augment photography’s monochrome palette, pigments were applied to portraits to make them more vivid and lifelike. Landscape photographers faced a different obstacle: the uneven sensitivity of early emulsions often resulted in blotchy, overexposed skies. To overcome this, many photographers, such as Gustave Le Gray and Carleton E. Watkins, created spectacular landscapes by printing two negatives on a single sheet of paper—one exposed for the land, the other for the sky. This section also explores the challenges involved in the creation of large group portraits, which were often cobbled together from dozens of photographs of individuals.

For early art photographers, the ultimate creativity lay not in the act of taking a photograph but in the subsequent transformation of the camera image into a hand-crafted picture. “Artifice in the Name of Art” begins in the 1850s with elaborate combination prints of narrative and allegorical subjects by Oscar Gustave Rejlander and Henry Peach Robinson. It continues with the revival of Pictorialism at the dawn of the twentieth century in the work of artist-photographers such as Edward Steichen, Anne W. Brigman, and F. Holland Day.

“Politics and Persuasion” presents photographs that were manipulated for explicitly political or ideological ends. It begins with Ernest Eugene Appert’s faked photographs of the 1871 Paris Commune massacres, and continues with images used to foster patriotism, advance racial ideologies, and support or protest totalitarian regimes. Sequences of photographs published in Stalin-era Soviet Russia from which purged Party officials were erased demonstrate the chilling ease with which the historical record could be falsified. Also featured are composite portraits of criminals by Francis Galton and original paste-ups of John Heartfield’s anti-Nazi photomontages of the 1930s.

“Novelties and Amusements” brings together a broad variety of amateur and commercial photographs intended to astonish, amuse, and entertain. Here, we find popular images of figures holding their own severed heads or appearing doubled or tripled. Also included in this light-hearted section are ghostly images by the spirit photographer William Mumler, “tall-tale” postcards produced in Midwestern farming communities in the 1910s, trick photographs by amateurs, and Weegee’s experimental distortions of the 1940s.

“Pictures in Print” reveals the ways in which newspapers, magazines, and advertisers have altered, improved, and sometimes fabricated images in their entirety to depict events that never occurred—such as the docking of a zeppelin on the tip of the Empire State Building. Highlights include Erwin Blumenfeld’s famous “Doe Eye” Vogue cover from 1950 and Richard Avedon’s multiple portrait of Audrey Hepburn from 1967. “Mind’s Eye” features works from the 1920s through 1940s by such artists as Herbert Bayer, Maurice Tabard, Dora Maar, Clarence John Laughlin, and Grete Stern, who have used photography to evoke subjective states of mind, conjuring dreamlike scenarios and surreal imaginary worlds.

The final section, “Protoshop,” presents photographs from the second half of the 20th century by Yves Klein, John Baldessari, Duane Michals, Jerry Uelsmann, and other artists who have adapted earlier techniques of image manipulation—such as spirit photography or news photo retouching—to create works that self-consciously and often humorously question photography’s presumed objectivity.

Faking It: Manipulated Photography Before Photoshop is organized by Mia Fineman, Assistant Curator in the Department of Photographs.

Related Publications and Programs
The exhibition is accompanied by a fully illustrated, 296-page catalogue written by Mia Fineman. The catalogue is published by The Metropolitan Museum of Art and distributed by Yale University Press, and is for sale in the Museum’s book shops (hardcover $60).

The catalogue is made possible by The Andrew W. Mellon Foundation.

The Museum will offer a variety of education programs for this exhibition. Highlights include a Sunday at the Met program on October 14, at 3:00 p.m.; a scholars’ symposium on November 2; and a Friday evening “Fright Night” on October 26, featuring talks, films, and art-making experiences inspired by trick and spirit photography, a screening of trick films by Georges Méliès; programs for visitors with disabilities; and a teen program.

The symposium is made possible by Joyce Frank Menschel.

Available in the reading room of the exhibition will be iPad kiosks at which visitors can use an interactive app based on content from Faking It to test their knowledge of photograph manipulation. The app will also be available for download from the Museum’s website and the iTunes App Store.

The interactive app is made possible by Adobe Systems Incorporated.

Related Installation
After Photoshop: Manipulated Photography in the Digital Age, on view September 25, 2012—May 27, 2013 will serve as an addendum to Faking It, exploring various ways in which artists have used digital technology to alter the photographic image over the past 20 years.