The thematic group exhibition Diagrams follows an approach from the study of imagery and enquires into this development's current effects on art's worlds of imagery. Drawings, collages, photographs and videos are being presented, but there are also spatially extensive objects and installations. Vermeir & Heiremans presents a significant project in terms of their long-term investigation into the ideology of architecture. 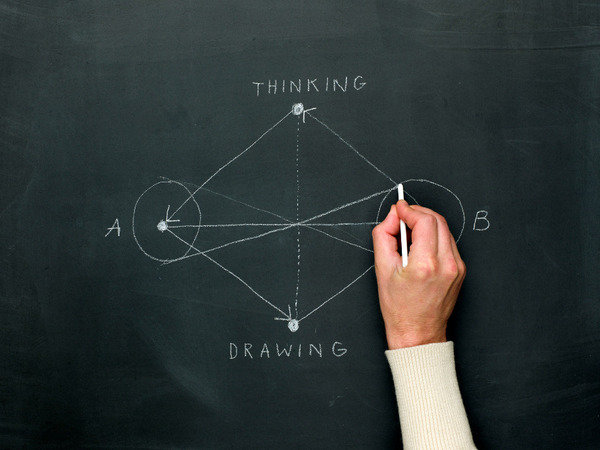 In 2009, the Arnolfini art centre in Bristol invited the Brussels-based artists Katleen Vermeir & Ronny Heiremans to develop a new project especially for its building. Their proposal was unequivocal: turn the former warehouse into luxury residential units and sell them off. They developed a unique collaboration between themselves and a renowned office for architecture – 51N4E – to create a new design and use for the Arnolfini building that is striking and ambitious.

Entitles The Good Life (2009) their proposal considers how "strategic foresight" has become part of the socio-economic plan for art institutions in the twenty-first century, locating these institutions as central in the regeneration of cities. The real estate agent guiding the tour adopts a verbal style that thinly veils any overt notion of gentrification, while conjuring up impressions of aspiration and opulence – a lifestyle fantasy projected onto an empty shell. Incorporating high-gloss brochures and a maquette of the extraordinary building designed by 51N4E, The Good Life adopts an approach that critically "over-identifies" with its subject matter to the point of adopting all its rhetorical forms. The Keynesian thesis of pumping steroids into ‘demand’ rather is taken to a near-delusional aesthetic plane through generating unattainable desires for the individual.

The Good Life was a significant project in the practice Katleen Vermeir & Ronny Heiremans in terms of their long-term investigation into the ideology of architecture, and led on to their most recent project "The Residence (a wager for the afterlife)" (2012).

From November 10, 2012 to January 27, 2013, the Bielefelder Kunstverein presents the thematic group exhibition "Diagrams". The background to diagrams is a growing plethora of digital data and a world becoming ever more complex in the wake of globalisation, and that is precisely why this form of graphic display is increasingly gaining in significance. The exhibition Diagrams enquires into the way these sketched developments affect the worlds of images and the strategies of visualisation in art. Ten artists were chosen for the exhibition as examples and are represented by various display models and forms of presentation. Numerous comissioned works, such as drawings, collages, photographs and videos are being presented, but there are also spatially extensive objects and installations. The works exhibited at Bielefelder Kunstverein make relations to diagrams, examples of cartography, notations and other graphic models visible.

Diagrams are used in the Internet, on television, in newspapers and presentations – simply, in all visual media. Elements of text, image and charts are frequently combined, depending on where they are being used. They are meant to display complex contents, data and information through visual representation. In this process, info-graphics like diagrams, graphs of stock markets or schematic drawings do not just serve display purposes but establish relations, communicate insights and convey arguments pictorially. One crucial task is presenting, organising and imparting knowledge. In a networked society, where images have become core media and where new information is produced every day, the need for visual translations and an illustrative order is patently obvious.

In the realm of art, diagrams are not a completely new phenomenon, yet, over the last ten years, it has been possible to discern a growing interest in this sort of image. A new research field has developed under the heading of diagramatics. The reasons for this lie in the increasing closeness of art and science, the increasing development of an extended notion of images, in engaging with abstract forms of representation in art history and in recognising diagrams as analytical instruments for establishing theories. Diagrams are not understood just as illustrations any more, but as independent visual forms. The conjunction of image, text and spatial-graphic organisation makes a form of visual thinking possible and provides a very particular potential for insight.

Therefore Ruth Buchanan (*1980 in New Plymouth) with her installation »No Solitary Beat« (2012) creates a schematic space for observing and reflecting human perception in the interaction of pictorial, textual and audible elements, which are based on a script by the artist. In the diagram on display, »Ästhetik als emotionale Wirksamkeit« (Aesthetics as emotional reality, 2007-2012) the computer scientist and systems analyst Gerhard Dirmoser (*1958 in Freistadt, Austria) collects adjectives from the specialised literature of art-history and philosophy on the topic of »aesthetics«. Nikolaus Gansterer (*1974 in Klosterneuburg, Austria) develops, in the form of the installation »Drawing a hypothesis« (2012) mounted on a table and on a wall constructed artefacts, drawings, his own diagrams and photos, associative connections and a diagrammatic view of visual art, science and theory. Philipp Hamann (*1984 in Bayreuth) reflects on the significance of storytellers and of storytelling itself. The pictorial account duly turns into his own process of discovery in the act of narration. For the first time Luis Jacob (*1971 in Lima, Peru) shows the work, »Manual« (2009-2012), which equally follows the principle of an album and relates human bodies and actions to examples of architecture, to sculptures or objects. With her mural »Re-education machine« (2011- 2012), consisting of a system of shelves and of objects, drawings and collages, Eva Kotátková (*1982 in Prague, Czech Republic) continues her artistic investigations into patterns of communication, methods of teaching, social norms and their mechanisms. For his photographical series »high altitude« (2008-2010) Michael Najjar (*1966 in Landau) translated the share indexes into the materiality and massivity of the Argentinean mountain range. The images show the development of the stock exchanges in the most important markets worldwide over the last twenty to thirty years. The collage »Assembly Instructions (The Power of 100)« by Alexandre Singh (*1980 in Bordeaux, France) came about at the invitation of the magazine ART REVIEW, and illustrated the title story of the 2010 November issue, »Power 100«, an annual ranking of the most influential personalities from the art world. Marcus Steinweg (*1971 in Koblenz) has been independently developing diagrams for some time now. They consist of his own texts, philosophical topics and the linguistic concepts of other philosophers, all of which he assembles into collages on paper and links together via simple lines. Jorinde Voigt ́s (*1977 in Frankfurt am Main) current collages »Views on Views on Decameron« (2012) open up a contemporary view onto paintings and book illustrations to Giovanni Boccaccio’s novella-collection, the »Decameron« from the 14th century, which has had a lasting influence on art.

Alongside diagram ́s aesthetic impact and creative aspect, how they convey artistic processes of working and thinking plays a vital role in the exhibition. The formal structure of diagrams here serves the artists as the point of departure for arrays and narratives based on images. Their actual function – directly conveying information – is, however, undermined, mostly in favour of a particular, open form of knowledge.

SYMPOSIUM: SATURDAY, JANUARY 19, 2013, 12AM - 18 PM
The symposium "Diagrams. Images as models of knowledge" will extend the reflexion and will give a historical classification as well as a current insight in the exhibition ́s subject.
For more details, schedules and registration, please check our website: www.bielefelder-kunstverein.de