You think you own your stuff but your stuff owns you. An exhibition of Shaw's collection of found thrift store paintings. His collection presented here alongside found photographs, drawings and a theatre backdrop, now numbers around 100 works. The paintings are instead presented as an archive of found aesthetics. 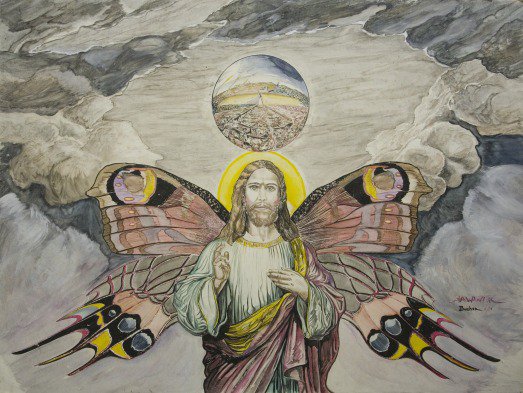 You think you own your stuff but your stuff owns you by LA based artist Jim Shaw is the third exhibition at BALTIC 39, a new cultural hub for contemporary art. Jim Shaw (born 1952) is one of America’s most important and prolific contemporary artists. Part of a ground- breaking group that graduated from CalArts in the late 1970s including Mike Kelley, John Miller and Tony Oursler, Shaw has one of the most distinctive visual imaginations of his generation.

Based in Los Angeles, Shaw has spent many years finding and collecting paintings by anonymous artists. His collection of Thrift Store Paintings, presented here alongside found photographs, drawings and a theatre backdrop, now numbers around 100 works. The paintings have not been modified in anyway, and are instead presented as an archive of found aesthetics arranged and curated by Shaw.

Jim Shaw’s favourite haunts to collect works are the city's numerous flea markets and thrift stores. For Shaw, their presentations represent 'the whole history of America’ and reveal its waste, consumption, tastes and histories. Much like his work, they bring a perverse order to the weirdness and wonder of the country's detritus. ‘We’re very good at producing crap,’ he says. ‘We started with the Shakers who produced exquisite furniture of a simple form and we’ve gotten to the point where we can produce things like The Avengers that are full of non- meaning and meaning at the same time.’ The flea markets feed Shaw’s collage mentality providing an inexhaustible source of objects and topics of research that flood his own work with both personal and societal streams of consciousness.

Also on show at BALTIC Centre for Contemporary Art, Gateshead Jim Shaw: The Rinse Cycle (9 November 2012 – 17 February 2013) presents the first large-scale solo exhibition since 1999. It will bring together more than 100 paintings, sculptures, drawings and videos from the last 25 years, including several works that have never been exhibited before.

BALTIC 39 is a collaboration between funders Newcastle City Council and Arts Council England and new operating partners, BALTIC Centre for Contemporary Art and Northumbria University.
It was created from an existing six story warehouse building built in 1905. The structure of the building was largely preserved, with the introduction of three modern interventions, although the building has been designed to retain its original industrial feel.
The architectural concept for the building was created by Austrian Architects, Jabornegg & Palffy, with detailed design by the Newcastle office of Atkins Global. The Structural Engineer was White Young Green. Newcastle City Council provided the Mechanical and Electrical design and the overall Project Management was undertaken by JPM Consultants. The main contractor was Rok Building Ltd.