Responding to and acting upon the Open Window gallery, in "Soft frame" Blaine Western and Michael Parr intervene and disrupt this architectural space. Len Lye: The New Yorker, explores artist's early years in New York - between his arrival in 1944 and the emergence of his kinetic sculpture, or 'tangibles', in the early 1960s. Singular Companions - Sculpture from the Collection: works are cast, assembled, recycled, woven, thrown, carved, welded, hand-formed or illuminated. 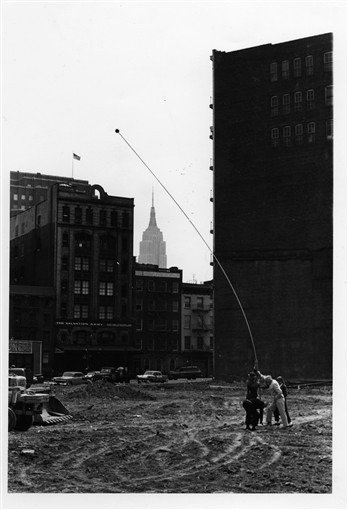 Responding to and acting upon the Open Window gallery, Blaine Western and Michael Parr intervene and disrupt this architectural space. Taking the name Open Window to its literal end, the artists seek to re-construct our experiential understanding of ‘inside/outside’. Parr and Western’s process-oriented practice tests how potentials of architectural actions can alter our social encounters of everyday street and gallery environments.

Western and Parr have exhibited and published collaboratively through project space split/fountain and artist-run gallery Snake Pit in Auckland, as well as winning the 2012 National Contemporary Arts Award. Both artists graduated with Bachelors of Fine Arts (Hon.) from Elam School of Fine Arts, University of Auckland in 2011, where Western is currently a Masters candidate.

This project is kindly supported by Metro GlassTech New Plymouth

This summer’s Len Lye exhibition at the Govett-Brewster Art Gallery, Len Lye: The New Yorker, explores Lye’s early years in New York – between his arrival in 1944 and the emergence of his kinetic sculpture, or ‘tangibles’, in the early 1960s.

With an extensive look into the Len Lye Foundation collection and archives, Len Lye: The New Yorker considers Lye’s activity in this important but often overlooked period. A selection of both well known and seldom shown films will illustrate the artist’s ongoing engagement with abstract cinema, showcasing both Lye’s relentless technical innovation and a restlessness in searching for new media to pursue his interest in movement.

Between these familiar poles of the artist’s practice, the exhibition will consider many other aspects of Lye’s work, including rarely seen paintings, drawings, photograms, writings and personal objects.

Singular Companions
Sculpture from the Collection

Sculptural form is paramount in this exhibition from the Govett-Brewster Collection.

Grouped as new companions in five gallery spaces, the works explore the containment of memory, measure, the mapping of terrestrial journeys, the body and abstraction alongside interplays with domestic ciphers, social customs, illusion and weightlessness.

Works are either new to the Collection or have not been exhibited at the Govett-Brewster for many years.

The New Zealand and international artists in Singular Companions employ a wide variety of materials in their work from drift nets, beeswax and timber to copper, ceramic, neon, marble, fibreglass, re-purposed plastic bottles and sound.

The exhibition spans more than four decades of making and registers each artist's particular sculptural interests. These differ markedly, from the feminist concerns of Mary-Louise Browne to the environmental considerations of Andrew Drummond, from Filipe Tohi's complex patterned abstraction to the investigation of perception by Paul Hartigan and Neil Dawson. Recent additions to the collection by artists Lisa Reihana, Laurelle Pookamelya, Bill Culbert and Lauren Winstone are presented alongside important yet rarely seen works from our holdings.