From Picasso to Pollock

An exhibition of approximately 130 works of art by 48 artists from the Guggenheim's extensive collection of 20th-century masterworks, including painting, works on paper, and sculpture. 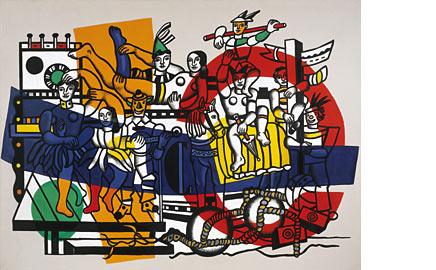 From Picasso to Pollock: Classics of Modern Art, an exhibition of approximately 130 works of art by 48 artists from the Guggenheim's extensive collection of 20th-century masterworks, including painting, works on paper, and sculpture. Highlighting the aesthetic vanguard from Cubism through Abstract Expressionism, the exhibition will feature many of the Guggenheim's most beloved works by some of the last century's most influential artists. On view for the first time in over a decade will be a site-specific ceramic mural by Joan MirÃ³, which has been obscured behind a temporary wall on the first ramp of the Frank Lloyd Wright rotunda. The exhibition will also feature a special presentation of watercolors by Vasily Kandinsky, an artist whose works the Guggenheim holds in depth. From Picasso to Pollock will remain on view through September 28, 2003.

"We are very pleased to present this exhibition of modern masterpieces from the permanent collection of the Guggenheim," said Thomas Krens, Director, Solomon R. Guggenheim Foundation. "While the museum's collection has grown to encompass a much wider range of art, these masterpieces remain at the heart of the collection, constituting the very core of the institution. From Picasso to Pollock offers a sweeping overview of painting and sculpture from the first half of the 20th century and celebrates the very origins of the museum."

The exhibition is installed chronologically beginning with Cubism and the School of Paris through various genres of Modern art. Formulated by Pablo Picasso and his Parisian colleague, Georges Braque, Cubism offered new possibilities for rendering three-dimensional objects on the two-dimensional picture plane; images are fractured into myriad small facets and depicted as if seen from several viewpoints simultaneously. Highlights of this section include Accordionist by Picasso (1911) and Braque's Violin and Palette (1909).

Robert Delaunay, Fernand LÃ©ger, Albert Gleizes, and Juan Gris elaborated on Picasso and Braque's vocabulary of Cubism, tailoring it to their own sensibilities. Through the evolving experiments of these painters, Cubism became more expressive in its range of subject matter and color. Some of the formal devices of Cubism were also utilized by the Russian-born artist Marc Chagall, who moved to Paris in 1910. Chagall integrated personal fantasy and narrative elements from Russian folk art into an advanced formal vocabulary indebted to the French artists. Associated with the School of Paris, Chagall and a number of other figurative artists such as Italian-born Amedeo Modigliani had diverse stylistic approaches to representational subjects but were united in their rejection of academicism. Delaunay's Eiffel Tower (1911) and Chagall's Paris through the Window (1913) typify the revolutionary work of the Parisian avant-garde.

While Cubism was at the forefront of new art in France, equally radical approaches to painting were taking place in Italy, Russia, and Germany. Italian Futurists such as Giacomo Balla and Gino Severini integrated some of the principles of Cubism and Divisionism in creating images that glorified the energy and speed of modern life. Red Cross Train Passing a Village (1915) by Severini shows the signature bright colors and technical innovations present in Italian Futurist painting. Artists of the Russian avant-garde such as Alexander Archipenko, Mikhail Larionov, Kazimir Malevich, and Liubov Popova combined political and social concerns with their stylistic innovations. In works characterized by potent and unnatural color, German Expressionists drew on the work of the Symbolists, often linking extreme emotional sentiments with symbolic images derived from the visible world. There is no better example of this than Franz Marc's Yellow Cow (1911), which demonstrates the artist's theory of color symbolism and use of animal imagery in representing spiritual ideals.

Russian-born Vasily Kandinsky made important contributions to German Expressionism while working in Munich during the early part of his career, but his later formulation of a completely nonreferential mode of painting is that which has made his work most significant for the Guggenheim Museum. His vision of a pure painterly abstraction was shared fully by the museum's first director, Hilla Rebay. In his 1911 treatise On the Spiritual in Art, Kandinsky connected abstract painting to music and an "inner necessity," rather than to the external world, and this aesthetic served as the catalyst for the formation of Solomon R. Guggenheim's remarkable collection of largely non-objective art. Kandinsky believed that the task of the painter was to convey, not an imitation of natural appearances, but an evocation of his/her own inner, spiritual world. In the summer of 1929, Rebay introduced Guggenheim to Kandinsky during a visit to the artist's studio at the Bauhaus in Dessau, Germany. That occasion marked the beginning of Guggenheim and Rebay's commitment to acquiring Kandinsky paintings and watercolors in depth. Kandinsky's oil paintings Black Lines (1913) and Several Circles (1926) are not to be missed.

Like Kandinsky, Piet Mondrian's pioneering role in the development of abstraction in the twentieth-century is characterized by attention to spiritual aims. Mondrian distilled the appearances of the material world in order to evoke transcendent principles. His balanced, gridlike compositions of horizontal and vertical elements visualize a universal stability. The Guggenheim also has a total of seventeen works by Mondrian in its collection, including paintings and works on paper. Three works are presented in the exhibition: Tableau 2 (1922), Composition (1929), and Composition No. 1 (1930).

In the years immediately following World War II, a style of abstract painting called Art Informel (unformed art) emerged in Paris. Like Abstract Expressionism, which is often considered its American equivalent, Art Informel was concerned with spontaneous execution, the virtues of painterly gesture, and the physical properties of mediums. Art Informel and Art Brut (raw art) are represented in this exhibition by Alberto Burri, Jean Dubuffet, and Antoni TÃ pies. These genres frequently incorporated materials that were traditionally rejected by Western aesthetic convention: for example, pebbles, glass, sand, burlap, or rags. This use of unusual materials influenced the aesthetics of subsequent international movements such as Arte Povera (poor art) and Process Art.
At the same time, during these postwar years, the focus of the avant-garde shifted from Europe to America. New York became the center of Modern art, inheriting from Paris the position of artistic capitol. The chief protagonists in this succession were the painters of the New York Schoolâ€”the Abstract Expressionistsâ€”including Willem de Kooning, Robert Motherwell, Jackson Pollock, and Mark Rothko. Highlights include Pollock's Ocean Greyness (1953) and Rothko's Untitled (Violet, Black, Orange, Yellow on White and Red) (1949). The expressive aspects of their work have been linked to the subjective heroism of earlier forms of Expressionism as well as to the Surrealist technique of automatism. Although the Abstract Expressionists were not united by a single style, they shared an interest in self-expression, the process and essentials of making art, and a desire to unite form and emotion. Using an active procedure that included pouring and squeezing paint directly from cans and tubes, Pollock developed a style that was as original and influential to the art of the second half of the twentieth century as Pablo Picasso's had been to the first half.

From Picasso to Pollock: Classics of Modern Art was organized by Lisa Dennison, Deputy Director and Chief Curator, and Tracey Bashkoff, Associate Curator for Collections and Exhibitions. The exhibition is accompanied by a catalogue featuring a selection of more than 50 highlights from the presentation ($25 softcover only).