Thought Becomes Action. A selection of new and recent film and print based works. Dove's work can be interpreted as a kind of aesthetic essentialism, or the distillation of the everyday into fundamental shapes, sounds and colours. 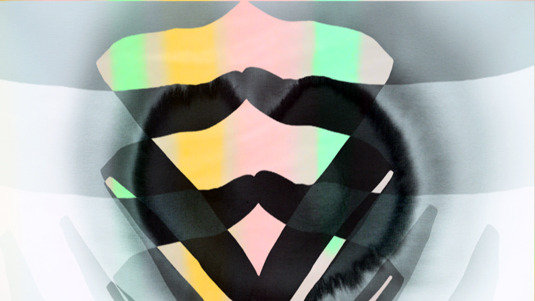 British artist Katy Dove presents a selection of new and recent film and print based works at Spacex. Dove’s work can be interpreted as a kind of aesthetic essentialism, or the distillation of the everyday into fundamental shapes, sounds and colours.

The centrepiece of the exhibition is a new film work titled Meaning in Action (2013). The starting point for the film is the idea that like in choreography, meaning exists in movement. The body is the place through which our mind makes contact with the world. It is where our thoughts become actions. The film explores ideas relating to inner and outer mental space. Through capturing different actions – repetitive mark making on fabric, the geometry that stems from movement of the hand and the process of ink drying slowly on wet silk, movement, shape, and texture are formed. These are edited with close up footage of bodily movement, the resulting images reflect a psychological state inherent in these actions.

Dove starts work with a process of intuitive mark making often in the form of drawings and watercolours. These serve as raw material for animations, watercolour paintings and works on paper. The majority of the sound that accompanies the film works is produced by the artist. Three animation works, Luna (2004), Sooner (2007) and October (2011), projected on a loop onto a single screen offer an insight into the progression of Dove’s film work. October is the first film in which Dove made a departure from using only made imagery to incorporating video footage.

A series of 6 etchings and paintings from 2009–10 entitled Six Audio Visual Musical Forms will be on display. The title is taken from Norman McLaren’s publication of the same title, a decorative interpretation of six recognised musical forms ranging from canon to fugue. Dove’s reinterpretation of these provides a more open approach, acting like a graphic score as opposed to a recognised music score. Similarly to McLaren, Dove has used text, pattern and diagrammatic forms to describe music, some of which hint at musical notation, others describing sound in a more textural way.

Two photographic works under the collective title Make a Shape (2007) will also be on display. These works stem from collaborative work with Edinburgh based choreographer Sheila Macdougall and mark the beginning of an interest in choreography, which continues to be explored in Meaning in Action.

Spacex is a leading contemporary art gallery located in the centre of Exeter. Our diverse programme encourages the public to engage with the latest developments in contemporary art through a changing exhibitions programme, which includes new commissions, projects and activities. A significant part of our programme, including artist-led projects, events and research, takes place outside of the gallery. We have an international reputation for presenting ideas from some of the most daring and exciting artists working today.