A Pioneer of Abstraction. The exhibition presents Hilma af Klint's entire oeuvre in all its complexity, giving a deeper understanding of her art. Her many notebooks have been included in the research for the exhibition, which comprises a total of 230 works - 130 are paintings and 100 works on paper. 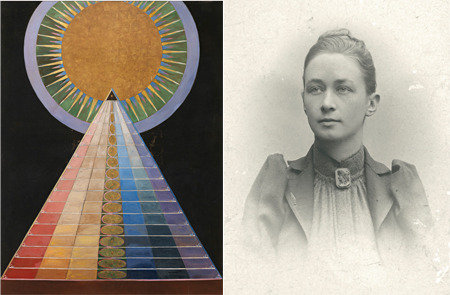 One hundred years ago, Hilma af Klint painted pictures for the future. By 1906, she had developed an abstract pictorial imagery – some years before artists such as Kandinsky, Malevich and Mondrian. Moderna Museet is celebrating Hilma af Klint as a pioneer of abstract art and one of Sweden’s greatest artists. A woman artist whose groundbreaking works and radical imagery have remained largely unknown to this day. It is high time that Hilma af Klint’s entire oeuvre is presented in its full complexity, in Sweden and the rest of the world.

Hilma af Klint (1862-1944) was a pioneer of abstract art, who turned away from figurative painting as early as 1906. Between 1906 and 1915, she produced nearly 200 abstract paintings, some of which are in monumental formats. Like Wassily Kandinsky (1866-1944), Piet Mondrian (1872-1972), Kazimir Malevich (1878-1935) and František Kupka (1871-1957), who are still regarded as the main protagonists of abstract art in the beginning of the 20th century, Hilma af Klint was influenced by contemporary spiritual movements, such as spiritualism, theosophy and, later, anthroposophy.

Hilma af Klint’s oeuvre builds on the awareness of a spiritual dimension of consciousness, an aspect that was being marginalised in an increasingly materialistic world. When she painted, she believed that a higher consciousness was speaking through her. In her astonishing works Hilma af Klint combines geometric shapes and symbols with the ornamental. Her multifaceted imagery strives to give insights into the different dimensions of existence, where microcosm and macrocosm reflect one another.

Curator Iris Müller-Westermann:
“Hilma af Klint left behind a comprehensive and visually striking oeuvre. Her works, produced in seclusion, are as powerful as they are enigmatic. Their complexity, scale, and consequence are astonishing. The artist unwaveringly explored new horizons at the outset of the 20th century, a radical pioneer of an art that abandoned the depiction of the visible reality. Hilma af Klint was one of the few female artists of her generation who fully pursued what she believed in. She was convinced of the importance of her artistic output and devoted all of her energies to her tasks.”

Between 1906 and 1915, Hilma af Klint created her central body of work, The Paintings for the Temple. This major cycle of mainly abstract works comprises 193 paintings in various series and subgroups. The first 111 paintings were produced between November 1906 and April 1908. The artist described how, as a medium, her hand was guided as she painted these pictures: “The pictures were painted directly through me, without any preliminary drawings and with great force. I had no idea what the paintings were supposed to depict; nevertheless, I worked swiftly and surely, without changing a single brushstroke.”

Hilma af Klint left more than 1,000 paintings and works on paper. Although she exhibited her early representational works, she refused to show her abstract paintings during her lifetime. In her will, she stipulated that these groundbreaking works must not be shown publicly until 20 years after her death. She was convinced that only then would the world be ready to understand their significance.

Moderna Museet’s retrospective exhibition Hilma af Klint - A Pioneer of Abstraction is the most comprehensive presentation of Hilma af Klint’s work to date. In addition to The Paintings for the Temple, nearly half of the works featured in this exhibition were created before and after this series, and some of them are now being shown for the first time. In other words, this exhibition will present Hilma af Klint’s entire oeuvre in all its complexity, giving a deeper understanding of her art. Her many notebooks have been included in the research for the exhibition, which comprises a total of 230 works - 130 are paintings and 100 works on paper.