In "Timer is over, time has come", Richard Hughes' sculpture and installations draw on the cast-off and dilapidated objects of the urban wasteland. "London Photopraphs" by Spender features a series of photographs documenting street, pub and family life in the working class communities of Stepney, Whitechapel and Lambeth. 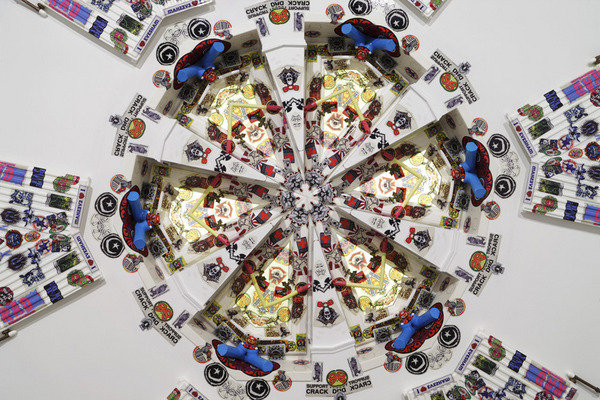 Richard Hughes - Timer is over, time has come

Hughes' sculpture and installations draw on the cast-off and dilapidated objects of the urban wasteland.Using a labour-intensive process of mould-making and casting, he produces meticulously crafted replicas of objects that are injected with an element of fantasy. His trompe l'oeil sculpture often produces a misleading impression of reality, bringing a sense of wonder and enchantment to the everyday.

Produced in collaboration with Tramway, Glasgow, Time is over, time has come will span the building featuring newly commissioned sculptures and installations.

Richard Hughes has had solo exhibitions at Tramway, Glasgow (2012); Sculpture Court, Tate Britain (2006); and The Showroom, London (2004). His work has been exhibited internationally, including presentations at the François Pinault Collection, Punta della Dogana, Venice; Carnegie Museum of Art, Pittsburgh and the Schirn Kunsthalle, Frankfurt. Hughes was selected for the fourth Liverpool Biennial in 2006 and the British Art Show 6 in 2005. He was nominated for the Beck's Futures award in 2006 and was the recipient of the EAST International award in 2003.
---
Humphrey Spender - London Photopraphs

firstsite celebrates the work of the Essex-based photographer and artist, Humphrey Spender (b. London 1910; d. near Maldon, Essex, 2005).

Spender was a social documentary photographer, producing a remarkable series of street-life surveys that captured the lives of ordinary people in 1930s Britain. He was one of the first in the UK to use a 35mm camera for documentary journalism, which allowed him to spend time amongst his subjects without being noticed. This exhibition features a series of photographs documenting street, pub and family life in the working class communities of Stepney, Whitechapel and Lambeth in London in the mid-to late 1930s.

During the 1930s, Spender worked as a photojournalist for the Daily Mirror and the popular weekly magazine Picture Post. He also became involved with the social research organisation Mass Observation, who employed him as a photographer to document the customs and habits of the British people. Following the Second World War, during which he served as a war photographer, he devoted himself mainly to painting, wallpaper and textile design, and taught at the Royal College of Art from 1956 to 1976. In 1968, he commissioned the architect Richard Rogers to build him a house and studio near Maldon, Essex, where he lived until his death in 2005.