The Green Line. The exhibition title is a nod to Matisse's well-known 1905 portrait of the artist's wife and is visually referenced in several of Gordon's works. 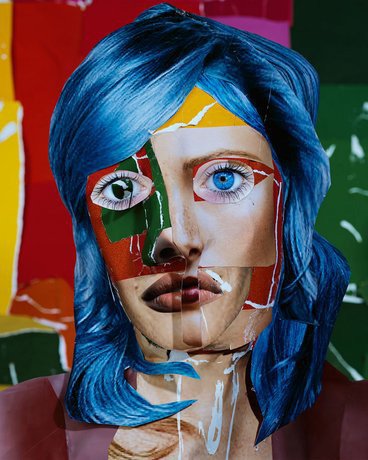 M+B is pleased to announce The Green Line, Daniel Gordon’s first solo exhibition in Los Angeles. The exhibition title is a nod to Matisse’s well-known 1905 portrait of the artist’s wife and is visually referenced in several of Gordon’s works including large scale still lifes and portraits, along with a selection of smaller works operating as isolated studies. In conjunction with the exhibition, Mörel has published Gordon’s second monograph titled Still Lifes, Portraits & Parts, which will be available at the gallery. Daniel Gordon: The Green Line runs from May 18 through June 29, 2013, with an opening reception for the artist on Saturday, May 18 from 6 to 8 pm.

In Gordon’s practice, the artist culls photographic images from the Internet, prints them out and uses them to build three-dimensional tableaus. He then photographs these tableaus with an 8 x 10 inch view camera. Afterward, the sculptures are dismantled, though their various elements—body parts, colors, background patterns—are often reused to make new works.

Gordon's melding together of fragmented parts form a dislocated reality where different perspectives, profiles and people merge into an incongruous whole. Through the process of slicing, cutting, gluing, staging, arranging and recycling, Gordon executes a shift from digital to analogue—almost as though he were engaged in a physical form of Photoshop—and challenges the stability of the fixed image, opening up the possibility for new meanings to emerge. This unique handling of the photographic medium connects Gordon with the history of collage and painting. In these works red, yellow and blue dominate in bold blocks. Visibly torn edges, gobs of glue and raw, recycled scraps fuse and separate before our eyes, wavering between completion and dissolution.

Also on display is a selection of smaller works depicting fruits and vegetables that Gordon refers to as color and object studies. These formal investigations employ another layer of recycling: all are parts or pieces that have been discarded from the larger still lifes and portraits. Here they are given special attention, as if viewed under a microscope, to further examine the physical nature of these objects—the fine line the work straddles as it shifts from the two-dimensional into the three-dimensional.

Daniel Gordon (b. 1980) holds a Bachelor of Arts from Bard College (2004) and an MFA from Yale School of Art (2006). Solo exhibitions include Zach Feuer Gallery, Wallspace, and Leo Koenig Inc. in New York City and Claudia Groeflin Gallery in Zurich. In 2009 he was included in the New Photography exhibition at the Museum of Modern Art in New York, and in 2010 his work was featured in Greater New York at MoMA P.S. 1. Four books have been published of Gordon’s work: Still Lifes, Portraits & Parts (Mörel, 2013), Flowers and Shadows (Onestar Press, 2011), Portrait Studio (Onestar Press, 2009) and Flying Pictures (powerHouse Books, 2009). Gordon was recently appointed a Critic in Photography at Yale and currently lives and works in Brooklyn, NY.