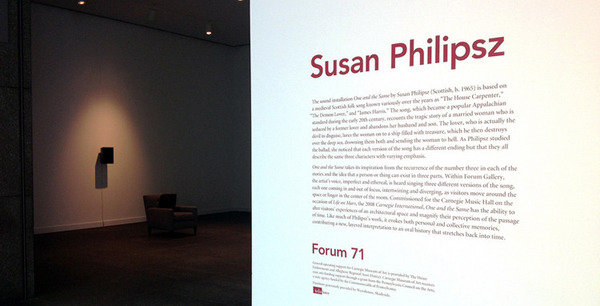 The sound installation One and the Same by Susan Philipsz (Scottish, b. 1965) is based on a medieval Scottish folk song known variously as "The House Carpenter," "The Demon Lover," and "James Harris." The song, which became a popular Appalachian standard during the early 20th century, recounts a tragic story about a married woman who is seduced by a former lover and abandons her husband and son. The lover, who is actually the devil in disguise, lures the woman on to a ship filled with treasure, which he then destroys over the deep sea, drowning them both and sending the woman to hell. Like much of Philipsz's work, it evokes both personal and collective memories, contributing a new, layered interpretation to an oral history that stretches back into time. The exhibition is organized by Amanda Donnan, curatorial assistant for contemporary art.