Through a series of architectural interventions - free-standing windows and hanging lanterns - Martin Boyce transforms the ground-floor space into an immersive and dream-like landscape. The new series of photographs by Hannah Starkey explores the physical and psychological connections between the individual and her everyday urban surroundings. 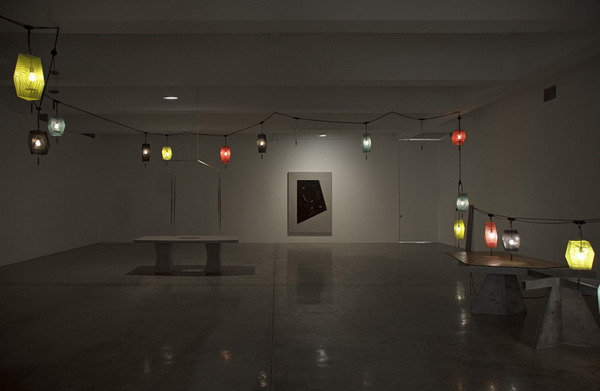 Martin Boyce
It's Over and Over

"But this passage has neither entrance nor exit..."
-Haruki Murakami, Wind Up Bird Chronicle

Tanya Bonakdar Gallery is delighted to present an exhibition of new work by Martin Boyce and the artist's third solo show with the gallery. Through a series of architectural interventions -- free-standing windows and hanging lanterns -- Boyce transforms the ground-floor space into an immersive and dream-like landscape. Populated by sculptures that simultaneously reference and redefine the legacy of modernist forms, the eerie environment that Boyce creates collapses the distinctions between past, present, and future. Like Murakami's paradoxical passageway, with neither entry nor exit, Boyce's works seem to exist in their own autonomous world, untethered to any fixed time or place.

At the entry to the gallery, Boyce presents a series of photos, titled Projectile Sun. The five images that compose the work track an orb of light defined by the circular window of an airplane as it moves across the bulkhead. The abstract photos resemble the sun itself as it rises and falls in the sky, but are disorienting -- the sun in these images does not establish a sense of location, but instead conveys a feeling of "placeless-ness" that continues in the main gallery.

Just beyond the photos, a doorway leads into a darkened space that houses Boyce's imagined terrain. Suspended from various heights on a single chain, a constellation of colorful lanterns made from perforated steel glows warmly in the otherwise un-illuminated space. The material and form of the lamps conjure up the outdoor space of an illuminated terrace or courtyard, and as sculptures they point away from themselves to activate the floor below.

Much of Boyce's work engages with thresholds and transformation. With the sculpture Against the Night, which takes a 1951 Jean Prouvé library table as its form, the distinction between interior and exterior dissolves. The table appears to have been abandoned and battered by the elements; its tabletop is now a broken piece of shuttering ply and steel lanterns like those hanging from the ceiling replace the original built-in light fixture. In another table work, a grill is set into the concrete surface acting somewhere between a drain and a window. Above the table a mobile is suspended. Constructed from brass L-section and chain, the sculpture collapses the distance between the natural form of a weeping willow branch and the constructed world of its constituent parts. Both sculptures recombine references to modernist forms in unexpected ways to create a poetic synthesis.

The lyrical and poetic nature of Boyce's work is apparent throughout the exhibition, but especially clear in a single wall-work. A large panel that appears to be a boarded up window set into a section of cast concrete contains the word "Eclipse" spelled out in the artists own tumbling typography. The letters that appear in the work get their angular shapes from the silhouette of a concrete tree designed in the 1920s by Jan and Joel Martel that has been of central importance to Boyce's practice for the past eight years.

Winner of the Tate's 2011 Turner Prize, Martin Boyce (b. 1967) lives and works in Glasgow. Boyce completed a commission as part of the List Visual Art Center's permanent sculpture program on the campus of MIT in Cambridge, MA in 2011 and in 2009, the artist represented Scotland at the Venice Biennale. His work is included in the collections of the Museum of Modern Art, New York; Tate, London; Museum für Moderne Kunst, Frankfurt; and Rhode Island School of Design, Providence, RI, among others.

Hannah Starkey
In the company of Mothers

Tanya Bonakdar Gallery is very pleased to present exceptional new photography by Hannah Starkey. Entitled In the company of Mothers, this is the artist's third solo exhibition with the gallery.

Quietly contemplative yet intensely evocative, this new series of photographs builds on Starkey's exploration of the physical and psychological connections between the individual and her everyday urban surroundings. Since the beginning of her career, the artist has worked predominantly with women as her subjects, collaborating closely with actresses as well as anonymous acquaintances she meets on-site to develop intricately textured scenes that filter modern life through the female perspective. Together with these models, Starkey reconstructs glimpses of interior lives by capturing her subjects in poignant moments of introspection amid ordinary public spaces. Lost deeply in their own thoughts with eyes diverted or shielded from the camera's gaze, Starkey's quiet protagonists tap powerfully into the minds of her viewers as they work to construct their own interpretations of these elusive narratives.

Within the second floor gallery space, Starkey presents eight densely colored and layered compositions that focus specifically on the mother figure. Staged throughout different areas of London, these scenes frame a series of women and children against stark urban backdrops - walls of graffiti and street murals, inner city parks, storefront windows, a construction site - that heighten the sensation of the images on both a formal and associative level. While the sleek and often severe aesthetic of modernist architecture has always played an important role in her compositions, here the artist juxtaposes elements of this constructed environment with occasional glimpses of blue skies, natural light and environments. Strong associations between colors, shapes and patterns work to visually conflate these real and represented spaces, while recurring symbols like windows, sunglasses and other reflective surfaces trigger deeper psychological connections between the personal and social, internal and external worlds that we all inhabit. Like these symbols, Starkey's photographs function as images of reverie that allow viewers to explore not just what they see, but how they experience the visual world at large.