Panel Paintings 2004-2009. Coinciding with the artist's 90th birthday year, the exhibition features seven works consisting of two to four canvases of solid color. The large-scale rectilinear works that blur the boundaries between painting and sculpture seem to hover on the wall, playing with light and shadow and dramatically engaging with space. 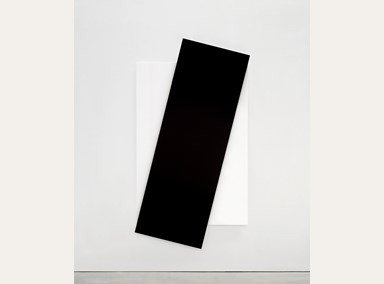 With a prolific career spanning over 60 years, Ellsworth Kelly is internationally renowned for his explorations of form, color, and space. Created between 2004 and 2009, the multi-panel works in the exhibition were selected specifically for the Phillips by the artist in consultation with Phillips Senior Curator of Modern and Contemporary Art Vesela Sretenović. The large-scale rectilinear works that blur the boundaries between painting and sculpture seem to hover on the wall, playing with light and shadow and dramatically engaging with space.

“The Phillips is honored to show the works of one of the most important artists of the 20th century whose creative genius continues to influence the art world today. Ellsworth Kelly’s legacy aligns with founder Duncan Phillips’s collecting philosophy—combining great art historical sources with contemporary ideas to push the boundaries of artistic innovation,” says Phillips Director Dorothy Kosinski.

Kelly’s monochromatic paintings are abstracted reflections of his immediate surroundings. The artist’s focus on color and shape developed in the late 1940s when he was in Paris, immersed in the city’s historic art and architecture while interacting with modern art pioneers including Constantin Brancusi and Alexander Calder. Inspiration for Kelly’s panel paintings ranges from Romanesque and Byzantine art and Parisian 20th-century architecture to Henri Matisse’s cutouts and Jean Arp’s collages. Painted with oil on canvas, each work offers a precise geometric configuration that balances color, positive and negative space, and the relationship of work to wall. The layering of shapes accentuates the sculptural quality, and the intense colors—from brilliant yellow to velvety black—make the works appear to vibrate.

AN AMERICAN ICON
Although often aligned with color field and minimalist painting, Kelly never adhered to a specific movement. From 1948 through 1954 he lived in Paris, where he was influenced by both classical art history and European modernists including Pablo Picasso and Paul Cézanne. By 1949 he abandoned figuration and easel painting and adopted abstraction, first by experimenting with collages and eventually by developing his signature vocabulary of simple geometric shapes in a spectrum of colors.

He settled in New York in 1954 during the heyday of abstract expressionism but was not interested in the movement’s gestural and expressive language. Similar to Pop artists such as Jasper Johns and James Rosenquist, he wanted to present the painting as an independent object, free of brush marks and content. In the late 1950s and the early 1960s, Kelly was among the first artists to discard the conventional square or rectangular painting format and create irregularly shaped canvases. Throughout his career, Kelly has also produced outline drawings of figures and plants, lithographs with striking color combinations, and shallow wood, steel, and bronze sculptures that appear almost two-dimensional. The Phillips Collection commissioned Kelly to create a site-specific sculpture for the museum’s Hunter Courtyard, opened in 2006. Mounted at an angle, Untitled is a large-scale bronze curve, floating weightlessly on the courtyard’s west wall.

ABOUT THE ARTIST
Ellsworth Kelly was born in 1923 in Newburgh, New York. He rose to art world stardom in New York City in the 1950s and in 1970 moved to rural Spencertown, New York. The Museum of Modern Art (1973), the Whitney Museum of American Art (1982), and the Solomon R. Guggenheim Museum (1996) have organized major retrospectives of his work. Kelly’s art has been featured in countless solo exhibitions at museums around the world such as the Haus der Kunst, Munich; San Francisco Museum of Modern Art; Philadelphia Museum of Art; and Fondation Beyeler, Basel. His works are in the collections of the Centre Pompidou, Paris; Museo Nacional Centro de Arte Reina Sofía, Madrid; Tate Modern, London; and National Gallery of Art, Washington, D.C. Kelly has created commissions for the UNESCO headquarters in Paris; Lincoln Park in Chicago; the United States Holocaust Memorial Museum in Washington, D.C.; and the Modern Wing of the Art Institute of Chicago. He continues to exhibit widely and work in his studio, with exhibitions in 2013 at the Barnes Foundation in Philadelphia, the National Gallery of Art in Washington, the Museum of Modern Art in New York, and the Detroit Institute of Art.

ORGANIZATION, SPONSORSHIP, AND CATALOGUE
The exhibition is organized by The Phillips Collection. Generous support is provided by Fenner Milton. A color catalogue accompanies the exhibition.

ABOUT THE PHILLIPS COLLECTION
The Phillips Collection is one of the world’s most distinguished collections of impressionist and modern American and European art. Stressing the continuity between art of the past and present, it offers a strikingly original and experimental approach to modern art by combining works of different nationalities and periods in displays that change frequently. The setting is similarly unconventional, featuring small rooms, a domestic scale, and a personal atmosphere. Artists represented in the collection include Pierre-Auguste Renoir, Vincent van Gogh, Edgar Degas, Henri Matisse, Pierre Bonnard, Paul Cézanne, Pablo Picasso, Paul Klee, Claude Monet, Honoré Daumier, Georgia O’Keeffe, Arthur Dove, Mark Rothko, Milton Avery, Jacob Lawrence, and Richard Diebenkorn, among others. The Phillips Collection, America’s first museum of modern art, has an active collecting program and regularly organizes acclaimed special exhibitions, many of which travel internationally. The Intersections series features projects by contemporary artists, responding to art and spaces in the museum. The Phillips also produces award-winning education programs for K–12 teachers and students, as well as for adults. The museum’s Center for the Study of Modern Art explores new ways of thinking about art and the nature of creativity, through artist visits and lectures, and provides a forum for scholars through courses, postdoctoral fellowships, and internships. Since 1941, the museum has hosted Sunday Concerts in its wood-paneled Music Room. The Phillips Collection is a private, non-government museum, supported primarily by donations.