Utopian Benches. Seventeen benches are gathered in the middle of the room. Cape has built these sculptures as a way of thinking - and talking - about communalism as a historic and a contemporary alternative to individualism. 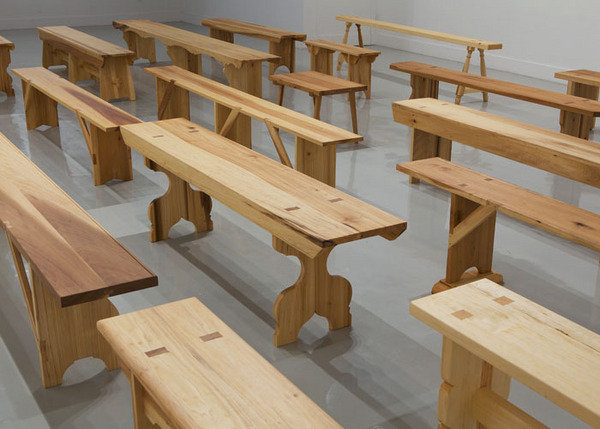 Seventeen benches are gathered in the middle of the room. Cape has built these sculptures as a way of thinking—and talking—about communalism as a historic and a contemporary alternative to individualism. This exhibition coincides with the release of Cape’s new book, We Sit Together: Utopian Benches From The Shakers To The Separatists Of Zoar, published by Princeton Architectural Press, and will include a program of open discussions following a format established by the Quakers. These gatherings will be focused around a range of topics pertinent to the project, with dates and participants to be announced shortly.

Constructed by Cape in his upstate New York studio, the benches at Murray Guy were built using measured drawings that he took from original benches used by nineteenth-century American intentional communities, both secular and religious: most famously the Shakers, but also the Community of True Inspiration in Amana, the Harmony Society, and the Society of Separatists at Zoar. While the originals were built in a variety of local woods and finishes, Cape has remade these benches in poplar, sourced around his studio.

Benches, as shared seating, represent community, and as examples of craftsmanship, they propose a reconsideration of value. The intentional association of craft with communalism and with resistance to industrial organization —and in our times to mass consumption—dates to William Morris and the origins of the Arts and Crafts Movement in Victorian Britain. Morris, who is best known for his naturalistic textile and wallpaper designs, also ran a furniture shop whose products followed simple English rural vernacular traditions, in sharp contrast  to the opulent output of conventional designers of the day. He was, moreover, an active socialist who spoke regularly to workingmen’s groups and advocated the overthrow of the social and political order of his time: an order that has changed little in the Western world in the ensuing years. Morris and his utopian vision became  the model for the Arts and Crafts community founded at Rose Valley outside Philadelphia.

Cape’s book, We Sit Together: Utopian Benches From The Shakers To The Separatists Of Zoar, describes twelve communal societies through the lens of their benches, proposing that material culture reflects social structure. Not only does the bench as shared seating reflect a general sharing of values, he suggests, but the design and use of a bench  in a communal society reflects the structure and values of that particular community. More information is available from Princeton Architectural Press. During the course of the exhibition, this book will be available at the gallery for a special price of $20.

Francis Cape was trained as a woodcarver before receiving his MFA from Goldsmiths College. The subjects of his recent works have been the flooding after Hurricane Katrina and Utility Furniture, designed and produced in Great Britain during and after World War II. His works have previously been exhibited at Prospect I, New Orleans; the St. Louis Art Museum; MOMA P.S.1; The Aldrich Museum of Contemporary Art; Eli Marsh Gallery, Amherst College; Contemporary Arts Center, Cincinnati, OH. In 2010 Cape was awarded a Pollock-Krasner Foundation Artist’s Grant. He lives and works in Narrowsburg, NY.

Developed as a touring project, Utopian Benches has been exhibited at Arcadia University Art Gallery, Glendale, PA, ICA/Maine College of Art, Portland, Maine, ME and the Tang Teaching Museum, Skidmore College, Saratoga Springs, NY. A Small Gathering of Utopian Benches is currently on view in “Against the Grain: Wood in Contemporary Art, Craft and Design” at the Museum of Arts and Design, New York.