A Microscopic View/Works by Xie Xiaoze. The works presented in this one-man show are diverse in the way that they reproduce, according to the adopted 'device', the nature of life-world, they interpret the fuzziness of our era, its ambiguities and paradoxes by juxtaposing the quite passage of the everyday to the tragedies that are concealed in it. 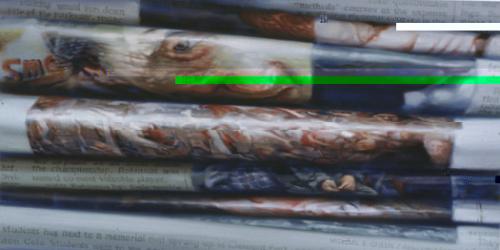 A Microscopic View/Works by Xie Xiaoze

(DOUBLE-CODE REALITY: Slow motion and still cropping from the Age of Symbiosis)

Postmodernism is the age of Symbiosis; it is the era of the what psychiatrist Keigo Okonogi defines the 'moratorium human being', that is a man still as a potential, in preparation, a waiting-system incapable to be fully analyzed, bearing no strong self-definition or fix social role. This is the era in which the world struggle to maximize the efficiency of society by means of unification, iper-organization, globalization, is constantly confronted with the capitalist claim to value the individual, the part within the whole, the uniqueness against the massive.
With the transition from an industrial society to an information society, the great achievements in the development of education, broadcasting, publishing have diverted our concern for the 'production and consumption of durable goods and currency' towards the consumption of symbols and signs, thus the added-value that highlights the manipulating power of the images.

Our understanding of reality is no longer dependant only on our personal and physical experience, but more and more assisted by accelerated communication, live-news reports synthesizing a day in a world's life. In this view we, as 'readers', are forced to live the history of the present according to its rhythms, in both a synchronic and diachronic dimension.

Xie Xiaoze's oeuvre is negotiating this superimposition of paces by means of a unique style and technique, achieved through a shifting translation in the use of the creative vehicles, which provokes an 'initial, fleeting, uncertainty regarding the identification of the medium'.
The works presented in this one-man show are diverse in the way that they reproduce, according to the adopted 'device', the nature of life-world, they interpret the fuzziness of our era, its ambiguities and paradoxes by juxtaposing the quite passage of the everyday to the tragedies that are concealed in it.

The Library Series (started in 1993) and The Silent Flow of Daily Life paintings portrait the artist's deep concern for time, memory and history, whereby the extreme close-up views of books, magazines, and newspapers stacks found of the shelves as arranged by librarians trigger the viewer's need for a 'gratifying likeness'. These intentionally ambiguous works remain at first mute and silent to the spectator, forcing to a reassessment of the image beyond the perimetric cut of the canvas, and leading us to the fruition of the different speed engraved in the visual reading of their photographic syntax.

In this sense they comprise the polysemous and vague ethos of our time, the poetic described by the amalgamating forces confronting the past and the present, the mundane and the horrific, the conquest and tragedies of the everyday, the microscopic mystery of the accidents and the macroscopic revolutions of history.

As Kisho Kurokawa maintains, the Post-modern age gave birth to a new historicism, since it is the time 'when the ambiguity of the intermediary spaces, which have until now been regarded as boundaries, will be rediscovered'.

In this way the contextual incompleteness concealed in the nature of these works open a larger and more complex debate on abstracts forms, that Xie recovers in the body of books. These objects, as simulacra of knowledge and truth, are put under scrutiny as signifiers blending the sacred and the profane. As the artists himself says, he is fascinated by what people do with books - banning, destroying, glorifying with gold leaves, worshipping as ultimate vessels of legitimacy.
In the Untitled series he uses gelatine silver photographic emulsion on sheet steel panels, referencing frames from a film sequence of Nazi flags fluttering in the wind. Here the motion of the original source is again diverted: the moving strip converted in a still frame, the row of video raster lines cropped, shifted in scale, deprived of the original colour abstract the object from its semantic environment positioning it in the 'liminal zone of near unrecognizability, between recollection and remembrance', between illusion and awareness.
The video October-December 2001, calls again to the backs and forths of history, to the cyclical paths dictated by idealism and heroism which attempt to describe revolution as progress. This work approaches the contingent situation in the Middle East after September 11 as reflected by the media.
45 Days is a special project realized for the CAAW, a time-based constantly changing installation of current newspapers from China and USA (where Xie is based since 1992) displayed in plexi-glass shelves. It will be a work in progress running for the entire period of the show, i.e. 45 days.
This work again originates from the interest of the author in the 'temporary nature of the object used, loaded with the all-encompassing information changing daily life. Newspapers are recycled. Life goes on'.
As a matter of fact the ubication of our awareness of life and reality is today fragmented in an intermittent flow of dramatic revelations picked by our conscience within the infinite narrative of history as perceived by our personal hierarchic order, and notion of values. By our role and position in society. Whether we know what it is.

Xie Xiaoze opera states that the perception of time cannot set aside the understanding of history, preserving in its frames the legendary legacy of Pygmalion's power.

Xie Xiaoze currently lives in Pennsylvania and teaches at Bucknell University-Department of Art and Art History. His works have been widely shown in USA in both group and solo-shows. Since he left China in 1992 this is the first time that an exhibition displaying a comprehensive summary of his work is shown in mainland.