Internationally known for captivating, three-dimensional visual illusions, Argentine artist has been commissioned by the Barbican to create an installation in Hackney. The work resembles a movie set, featuring the facade of a late 19th-century Victorian terraced house. The project is accompanied by a multidisciplinary programme of events. 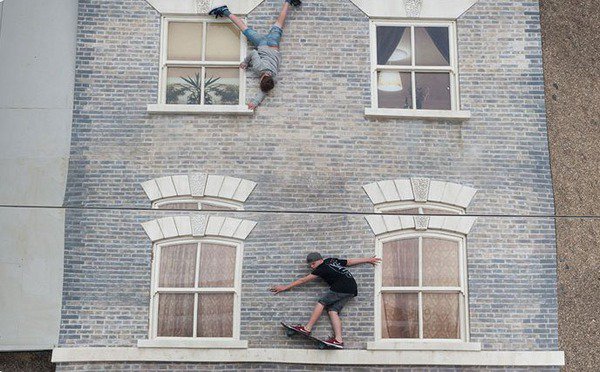 A new commission by Barbican Art Gallery, part of Beyond Barbican

Dalston House is presented on Ashwin Street in association with OTO Projects. The Barbican is an official partner of the London Festival of Architecture 2013. Supported using public funding by Arts Council England. Additional support from the Embassy of the Argentine Republic.

Internationally known for captivating, three-dimensional visual illusions, Argentine artist Leandro Erlich has been commissioned by the Barbican to create Dalston House, an installation in Hackney. The work resembles a movie set, featuring the façade of a late nineteenth-century Victorian terraced house. The life-size façade lies on the ground with a mirrored surface positioned overhead at a 45-degree angle. By sitting, standing or lying on the horizontal surface, visitors appear to be scaling or hanging off the side of the building. Sited at 1 – 7 Ashwin Street, near Dalston Junction, Erlich has designed and decorated the façade – complete with a door, windows, mouldings and other architectural details – to evoke the houses that previously stood on the block. Leandro Erlich: Dalston House opens on 26 June 2013 and is presented on Ashwin Street in association with OTO Projects. It is also part of the 2013 London Festival of Architecture.

Leandro Erlich: Dalston House is installed on a disused lot that has largely remained vacant since it was bombed during the Second World War. The installation extends the Barbican’s programme of Curve commissions to east London and is part of Beyond Barbican , a summer of events outside the walls of the Centre that includes pop-up performances, commissions and collaborations across east London. Beyond Barbican builds on the Barbican’s long history of programming work in east London that connects communities in the boroughs surrounding the Centre with some of the best art from around the world. The commission follows the success and legacy of Dalston Mill by EXYZT, a temporary installation and participatory project staged by the Barbican in Hackney in 2009, which reopened in 2010 as the Eastern Curve Garden.

Jane Alison , Senior Curator, Barbican Art Gallery, said:
“Building on the legacy of the wonderful Dalston Mill project that we commissioned from French collective, EXYZT in 2009, and the phenomenal success of Rain Room in The Curve, we are thrilled to be able to present Leandro Erlich’s work in the heart of Hackney. Dalston House is a theatrical spectacle, one where the audience makes the show. It is a delightful experience suitable for all ages – enjoy!”

For Erlich, the audience plays an active role in bringing his installations to life. By altering the viewer’s relationship with familiar spaces, he playfully disrupts our own notion of reality, creating new possibilities and situations. Leandro Erlich’s work is partly inspired by the surreal and sinister aesthetic strategies of Alfred Hitchcock, David Lynch, Luis Buñuel and Roman Polanski whom, he says, “have used the everyday as a stage for creating a fictional world obtained through the psychological subversion of everyday spaces”. Whether his participants appear to be submerged under water while remaining completely dry in the Swimming Pool, 1999; stroll down an old elevator shaft that has been turned 90 degrees in The Shaft, 2011; or sit in an apartment that revolves like a fairground ride in Carousel, 2008; Erlich’s work continues to break the boundaries of spatial reality.

Leandro Erlich was born in Buenos Aires, Argentina in 1973, to a family of architects. He lives and works in Buenos Aires and Montevideo, Uruguay, and has exhibited widely in Europe, Asia and North and South America. Works include La Torre (2007), exhibited at Museo Reina Sofia, Madrid; Swimming Pool (1999), shown at MoMA PS1 in 2008; and Monte-Meubles L'Ultime déménagement (2012) part of Le Voyage à Nantes, France. Leandro was invited to represent his country in the 49th Venice Biennale (2001) and has also participated in the Biennials of Istanbul (2001), Shanghai (2002), São Paulo (2004) and Liverpool (2008). He has also participated in the Whitney Biennial (2000) and the 1st Busan Biennale, Korea (2002). He was part of La Nuit Blanche de Paris (2004), the 51st Venice Biennale (2005), the Echigo-Tsumari Art Triennial, Japan (2006), and the exhibition Notre histoire at the Palais de Tokyo, Paris, in 2006, among others. His forthcoming projects include Anti-Gravity at the Toyota Municipal Museum of Art, in Aicha, Japan.

SPECIAL EVENTS
The project is accompanied by a multidisciplinary programme of events. On Thursday evenings and during weekends, there will be talks, film screenings, performances, tours and workshops exploring themes related to the project, including architectural history, urbanism, and perception, which are developed in collaboration with local organisations. Highlights include: walking tours of Dalston with local historians; east London storytelling; workshops and other onsite activities for families; live performances by local musicians and dancers; and screenings of feature films and videos by visual artists and community activists.

The Beyond Barbican summer programme encompasses a two day festival in the Queen Elizabeth Olympic Park on the first anniversary of the Olympic opening ceremony, a major new interactive art installation in Dalston from Argentine artist Leandro Erlich , three site-specific theatre shows, and a range of gigs and performances in unique venues across the east of the city from acts including Neon Neon and National Theatre Wales , Asaf Avidan and an evening showcasing three of the most exciting new artists from Brazil.

The programme includes a significant number of free events - including the annual outdoor celebrations Dance Nations Dalston and Shoreditch Festival - while many events and performances will have a family friendly feel.