Resuming Fragmented Histories. This exhibition, set against the backdrop of Central Europe's severely altered territorial and cultural relations, poses it with a new urgency. It also questions the social role of the art institution. Coproduction steirischer herbst. 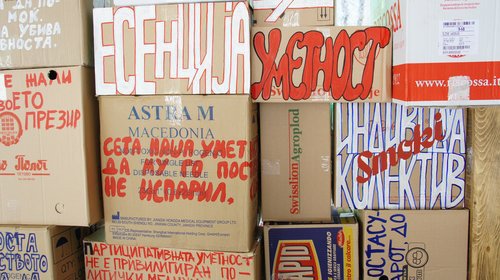 The exhibition “… Was ist Kunst? … Resuming Fragmented Histories” pursues the question that artist Raša Todosijević – and Serbian representative at the 2011 Venice Biennale – relentlessly posed in his series of performances from the late 1970s: “What is art?” After almost forty years of repetition to the point of exhaustion, the eternal question remains unanswered, even while it has consistently made the case for artists taking an active role in art discourse. This exhibition, set against the backdrop of Central Europe’s severely altered territorial and cultural relations, poses it with a new urgency. Artistic practice in the countries of the former socialist Yugoslavia, the challenges of current artistic practice in post-communist states, and the neocolonialist reality of Eastern Europe will be shown within the art historical context of outstanding earlier contributions from southeastern Europe—for example the avant-garde Slovenian OHO Group (1966–71) and the approaches put forward by the artists collective IRWIN, whose analyses of transnational, collective networks of life and art in the absence of any physical territory were trailblazing. The exhibition’s focus is on how a younger generation of artists is closely examining geopolitical determinants and locally connoted production through gender and political differences. Not only does the show inquire into the understanding at the heart of these new examinations. It also questions – and makes a plea on behalf of – the social role of the art institution.

The “fragmentary histories” described in the subtitle provide ample opportunity for the exhibition to enter into dialogue with the multi-disciplinary festival steirischer herbst, whose leitmotif this year is “Liasons Dangereuses.” Historical precursors and positions from more recent art history will be re-examined in light of their erstwhile confrontational effect. A piece by the Vienna-based artist Luiza Margan, for example, invites us to travel back to 1972 Graz, when protagonists of the Zagreb art group TOK staged a happening to protest the increasing commodification of art. In place of political slogans, their signs were emblazoned with geometrical shapes.

The exhibition also includes video artist Renata Poljak’s homage to the Yugoslavian actor Slavko Štimac. A celebrated child star during the Tito era, admired as a role model across generations, his role(s) diminished after the collapse of Yugoslavia and he was forgotten. When seen singularly, little stories such as these are almost microscopic. Viewed collectively, however, they allow a social atmosphere to remain open to explanations and interpretations – even after former dominant ideologies have collapsed. This is particularly apt in light of the fact that, as Igor Zabel has observed, “the communist system was never only a matter of general historical events and of global geopolitics. It functioned essentially on the micro level of every-day life and its details, from the choice of objects that surrounded people at home, at work and in the city to the way the passengers were communicating on a city bus. Politics, the structure of society and the most banal as well as the most intimate details of daily life were inseparably connected.”1 This is evident in the work of Bojan Fajfric, who seeks alternative possibilities and outcomes in moments viewed as historical turning points, even presenting his father in a less than heroic role in the film Theta Rhythm.

Within the context of the exhibition, Marta Popivodas’s film Yugoslavia: How Ideology Moved our Collective Body – by using footage from state parades and mass demonstrations to scrutinize the way ideology operates within public space – cogently illustrates the social change involved in the transition from socialist Yugoslavia to neoliberal Serbia. The exhibition “… Was ist Kunst? … Resuming Fragmented Histories” furthermore attempts to present the reactions of a younger generation to the sculpture and architecture of the once intact Yugoslavia, works fraught with mythology. Documentary (Marko Krojač) and performative (Marko Lulić) pieces engage in an active dialogue with the oeuvre of prominent Croatian sculptor Vojin Bakić (1915–1992). The exhibition underlines the fact that, even 24 years after the break up of Yugoslavia, and well beyond the context of art, Raša Todosijević’s question most certainly cannot be answered by falling back on the reductive narrative of successful eastward expansion.