Early Collages. The exhibition examines the origins of the American artist's style and the critical role of collage in his oeuvre. Focusing specifically on papiers colles and related works on paper from the 1940s and early 1950s, it features approximately 50 artworks drawn from museums and private collections across the United States and Europe. 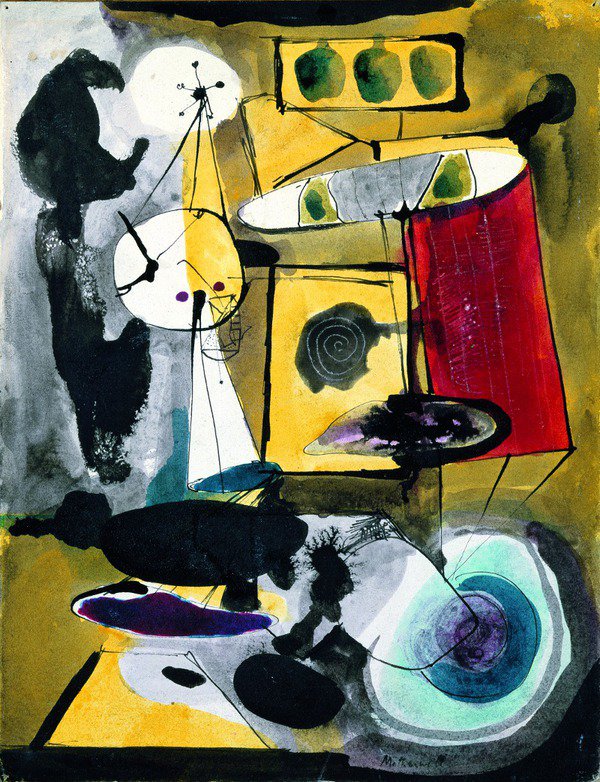 (NEW YORK, NY– August 22, 2013) — From September 27, 2013, through January 5, 2014, the Solomon R. Guggenheim Museum presents Robert Motherwell: Early Collages, an exhibition examining the origins of the American artist’s style and the critical role of collage in his oeuvre. Devoted to papiers collés and related works on paper made during the first decade of his career, this exhibition offers a focused exploration of Motherwell’s innovations to the medium. While the artist’s work has been investigated comprehensively in recent international shows, including a major retrospective that traveled to the Guggenheim Museum in 1984–85, this presentation is the first to extensively chronicle Motherwell’s artistic beginnings through the lens of his revelatory encounter with the collage technique, which he described in 1944 as “the greatest of our [art] discoveries.”

This exhibition is supported by the Terra Foundation for American Art with additional funding from the Dedalus Foundation, Inc.

The Leadership Committee for Robert Motherwell: Early Collages is gratefully acknowledged for its support, including Gilbert and Shelley Harrison, Dorothy and Sidney Kohl, Louisa Stude Sarofim, and Lissa Noël Wagner.

Exhibition Overview
Focusing specifically on papiers collés and related works on paper from the 1940s and early 1950s, Robert Motherwell: Early Collages features approximately 50 artworks drawn from museums and private collections across the United States and Europe. The exhibition examines the artist’s explorations in the medium and also honors Peggy Guggenheim’s early patronage of the artist. At her urging and under the tutelage of émigré Surrealist artist, Matta (Roberto Antonio Sebastián Matta Echaurren), Motherwell first experimented with the collage technique in 1943. As he recalled years later, “I might never have done it otherwise, and it was here that I found . . . my identity.” Motherwell’s earliest papier-collé works were featured in the groundbreaking show Exhibition of Collage, the first international presentation of collage in the United States held in 1943 at Peggy Guggenheim’s Art of This Century museum/gallery. Little more than a year later, Guggenheim mounted Motherwell’s first solo exhibition in this country, which proved to be one of the largest shows in the history of Art of This Century.

Over the next decade, Motherwell’s production of large-scale collages outpaced his creation of paintings. Motherwell’s enthusiasm for and dedication to the collage technique for the remainder of his career sets him apart from other artists of his generation and went beyond the mere physical presence of torn, rumpled, and pasted papers. He produced both abstracted figural collages and pure abstraction collages through the 1940s, however, by the middle of the next decade the Surrealist influences prevalent in these first works had given way to Motherwell’s distinctive mature style that was firmly rooted in Abstract Expressionism.

The genesis of Motherwell’s career coincided with a peculiar and turbulent period for the United States, when the country entered the World War II following the Japanese attack on Pearl Harbor on December 7, 1941. It is within this sociopolitical context that Motherwell engaged with themes of symbolic violence and humanitarian struggle. This preoccupation came to the fore in his work in collage beginning in 1943, from his application of evocative titles to the very process of tearing pieces of paper—an aggressive act Motherwell likened to “killing someone.” In these works he moved freely between spontaneous abstraction and semirepresentation, between abstract figures (Personage [Autoportrait], December 9, 1943) and pure abstraction (Untitled, 1943), at times incorporating fragmented military maps and resistance slogans (Viva, 1946), prison bar motifs (Jeune Fille, 1944), and wounded “stick figures” (Three Personages Shot, June 6, 1944). In his explorations with collage, Motherwell developed an artistic means of grappling with the madness of the sociopolitical situation of his day, as well as a way to express his personal anxieties as an emerging artist in New York. By cutting, tearing, and layering pasted papers, Motherwell reflected the tumult and violence of the modern world, which established him as an essential and original voice in postwar American art.

Exhibition Catalogue
Robert Motherwell: Early Collages is accompanied by a fully illustrated catalogue that offers a vital reassessment of the artist’s work in the medium. Exhibition curator Susan Davidson contributes an introduction that focuses on the artist’s early professional relationship with Peggy Guggenheim and Motherwell’s engagement with the exiled Surrealists and the burgeoning Abstract Expressionist group in New York in the 1940s. Megan M. Fontanella, Associate Curator, Collections and Provenance, Solomon R. Guggenheim Museum, examines early collages that address humanitarian themes of death, violence, and political struggle within the context of the sociopolitical climate of World War II America. Brandon Taylor, Professor Emeritus of History of Art, University of Southampton, United Kingdom, illuminates the history of collage, tracing its origins from the Cubist work of Pablo Picasso and other artists in the 1910s to the resurgence of interest in papier collé in 1940s America. This exhibition is also the occasion for the first in-depth study and technical analysis of Motherwell’s materials and working methods by Jeffrey Warda, Conservator, Paper, Solomon R. Guggenheim Museum, in what is anticipated to be an indispensable guide for the future preservation of Motherwell’s collages.

Education and Public Programs
For complete information about the range of public programs presented in conjunction with Robert Motherwell: Early Collages, please visit guggenheim.org/calendar. Highlights include the following:

Public Programs
Tearing Off and Beginning Again
Tuesday, October 22, 6:30 pm
Robert Motherwell’s involvement with collage in the 1940s paralleled his activities as a writer and editor. He often described his artistic work in editorial terms, referring to changes as acts of revision. His engagement with Dada while editing The Dada Painters and Poets particularly affected his thoughts about collage, creativity, and the role of destruction in the creation of art. In this lecture, art historian Catherine Craft, Adjunct Assistant Curator for Research and Exhibitions, Nasher Sculpture Center, Dallas, explores the relationship between artistic and editorial processes through Motherwell’s treatment of paper. $12, $8 members, free for students with RSVP.

Solomon R. Guggenheim Museum
1071 5th Avenue (at 89th Street) - New York, NY 10128
Museum Hours: Sun–Wed, 10 am–5:45 pm; Fri, 10 am–5:45 pm; Sat, 10 am–7:45 pm; closed Thurs. On Saturdays, beginning at 5:45 pm, the museum hosts Pay What You Wish.
Admission: Adults $22, students/seniors (65+) $18, members and children under 12 free. Available with admission or by download to personal devices, the Guggenheim’s new, free app offers an enhanced visitor experience. The app features content on special exhibitions, access to more than 1,200 works in the Guggenheim’s permanent collection, and information about the museum’s landmark building. Verbal imaging guides for select exhibitions are also included for visitors who are blind or have low vision. The Guggenheim app is sponsored by Bloomberg.