A group exhibit featuring six notable Los Angeles artists. The show is comprised of two and three-dimensional works mostly in mixed media, dealing with the concept of home/house, its comforts, its politics, and its misrepresentations. 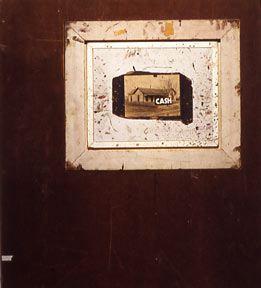 @ home's artists are (alphabetically) Tetsuji Aono, Llyn Foulkes, Diane Gamboa, Gronk, Gifford Myers and Francesco X. Siqueiros and was curated by Los Angeles artist Alfredo de Batuc. "Instead of focusing on the latest puff of trendiness, I approached artists who had previously dealt with this subject matter, regardless of whether the work was created recently or not" says de Batuc. The show is comprised of two and three-dimensional works mostly in mixed media, dealing with the concept of home/house, its comforts, its politics, and its misrepresentations. Rather than a conformist view, this exhibit offers a critical angle with wider connotations ranging from the politics and excesses of the real estate industry to the deceptions of mass-marketed anodyne home decor.

Llyn Foulkes. One of Llyn Foulkes recurrent subject matter is his take on the dynamics of family interaction, another is his response to the outrages perpetrated against the natural environment by uncaring real estate interests. His incisive potshots at the holy cows of corporate culture, suffused with a devil-may-care youthful exuberance and irreverence, point to a witty mind and an indomitable social critic. Foulkes has been active in the Los Angeles art scene since the late fifties and he has made manifest through his art his unflagging mettle and fearless stands over the decades. Although known for his bold use of color his entry in @ home is a lyric mixed media work in evocative sepia tones. In an elegant composition he integrates a found vintage photograph and superimposed the word CASH over human beings.

Gifford Myers is a sculptor well known for his use of ceramic as his medium of choice. His work covers a gamut of media and subject matter, and the scale of his work ranges from miniature-like to monumental. Some of his work in this exhibit reveals his incisive views of the politics of real estate, especially in Los Angeles, alluding to the manipulation of eminent domain, to the racial connotations of blockbusting. Myers' works in this exhibit go from glazed ceramics with detail added in acrylic, to marble and granite, to metal and wood, to acrylics on either velvet on sandpaper. Myers exhibits worldwide, especially in Italy where over the years he has created an important body of work.

Gronk, who started his art career as a performance and conceptual artist, is also well known for his neo-expressionist mostly two-dimensional work, but this multifaceted creator has never been circumscribed to only one or two disciplines in the arts. He continues doing performance as well as stage design and often collaborates in major multi-media efforts. Noted collaborations include those with the Kronos Quartet, and productions with Esa Pekka-Salonen and Peter Sellars. As an actor, he was featured as the star in the underground film Blue Collar, that was released this year. The pieces in this show go from acrylic on shaped canvas, to mixed media that include baked cookies and a glass sculpture that reflects on the theatrics of domestic dramas.

Francesco X. Siqueiros is an artist, printer, and publisher. As an artist, one of his constants is the concept of, what he calls, "equivalents" which is derived from Kandinsky's art theories. Unlike Kandinsky, who used only abstract shapes and colors, Siqueiros expands his visual lexicon by integrating letters, numbers and collage with his abstract and representational drawings and paintings. His two-dimensional constructions go beyond the limits imposed by the conventional square canvas. He often structures his work in a manner reminiscent of Russian constructivism. As a printer, he has worked with the best known publishers in Los Angeles (Cirrus, Gemini G.E.L.) and with the most respected artists. As a publisher, lithographs from his El Nopal Press are in the collections of LACMA, MOMA, the Brooklyn Museum, the New York Library, the Hammer Museum, and the Smithsonian among many others. During December 2003 the prestigious GalerÃ­a La Caja Negra of Madrid will be showing these lithos.

Diane Gamboa's cultural roots can be traced all the way back to the late 70s, early 80sx{2039} the beginnings of punk rock of which she was a dedicated votary. As such she created a series of black and white photographs of the bands. Performance and multimedia collaborations are important tributaries of her mÃ©tier; particularly well known are her paper fashion shows. She also has created a large body of two-dimensional art, where she often integrates other media. One focus of her attention is the examination of sexuality and how it plays itself out in the contemporary relations between women and men. The Kobe Bryant rape trial provided the trigger for her works in this exhibit which show her concern for the invasion of women's privacy and how male power can violate a woman's private parts and expose her most intimate garments to the circus of justice. The result is an exquisitely beaded male face sewn onto the front of panties, as well as a three-dimensional male nude fabricated with delicate women's lingerie materials. It is as if she intended to reach equality with her own homemade boudoir voodoo.

Tetsuji Aono, is a sculptor working primarily with ceramics. Aono often replicates mundane household objects with a delicate and exquisite craftsmanship. The targets of his inspiration are often icons of popular and commercial culture, especially those that contain elements of kitsch. In his wacky associations, he twists their meaning in a masterful way, often blowing holesx{2039} not only metaphorically x{2039} in the marketing of products and easy sentimentality, thus making visible the emptiness of their interiors. His works exude a sophisticated sense of humor and wit. He has been exhibited in significant group shows in the United States and several countries of Europe as well as solo shows in the United States and France. Aono has also had experiences in installation work and video performances.

Alfredo de Batuc, the curator, is an artist especially active in the Los Angeles area. His main mode of expression is painting, but he also forays in other media. His work has been published by Ed Hamilton Press and Self Help Graphics, and is in the permanent collections of LACMA, Laguna Art Museum, the California Supreme Court Building in San Francisco, the Museo Estudio Diego Rivera in Mexico City, and other public and private collections. @ home is his second curatorial effort, his first being Contextual Turbulence, 1993, for the now defunct Los Angeles Festival.