A group exhibition featuring fifteen artists who investigate the role of music in popular culture. Pop Rocks is named after a candy which exploded in your mouth made popular in the eighties. There was a widespread rumor that Pop Rocks, if eaten while drinking Coca-Cola, would cause one's stomach to explode, resulting in death. 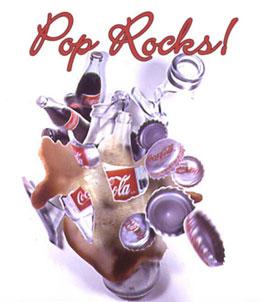 Caren Golden Fine Art is pleased to present Pop Rocks, a group exhibition featuring fifteen artists who investigate the role of music in popular culture. Pop Rocks is named after a candy which exploded in your mouth made popular in the eighties. There was a widespread rumor that Pop Rocks, if eaten while drinking Coca-Cola, would cause one's stomach to explode, resulting in death. In the spirit of this rumor, Thomas Eller's The Incident (coca-cola), depicts a bottle of Coca-Cola in various stages of shattering and aids in detonating the exhibition into an explosion of chaotic energy and sound.

Varying in their approach, their media and their relationship to music culture, the artists in Pop Rocks use sound and the absence of sound to express music's role as a motivating force in both personal and societal spheres. Passionately air drumming to the beats of an audio track that the viewer cannot hear, Reuben Lorch-Miller acts out his private fantasy of rock stardom in his DVD, Right There. Iona Rozeal Brown's worms, representative of today's consumer, attempt to experience music with their diminished sensory capacities. Examining the disparity between what we hear and what we see, John Parker's Listeners are eyeglasses with headphones in place of lenses. No music is heard; rather, we hear the sounds of ourselves stumbling blindly. Ed Osborn inverts the function of two test-tone records, designed to calibrate sound systems and test the fortitude of their speakers, by converting the records into speakers themselves. Emitting the strange sounds of their own recordings, they are essentially testing their own fidelity.

Depicting music as a commodity, Moyra Davey's photographs of a busy record fair portray the vinyl record as a lifeless object, a stark contrast to the emotive qualities that music can produce. Using the Beatles' White Album cover, Christian Marclay embosses a small excerpt from the lyrics heard on the record. The contents of an album, and of an era, are distilled down to one poignant phrase: 'I didn't catch your name'. Cut-up album covers are collaged in Gean Moreno's intricate landscapes that swirl with bold colors, while Dario Robleto's 70's influenced album covers critique that era with a dark and satirical twist. Based upon a Warhol image, Ray Beldner's portrait of Mick Jagger, executed in dollar bills, is an ironic commentary on the commodification of music.

William Cordova's DVD, 'You're Alla Bunch of Fucking Idiots', bootleg footage of a hip-hop breakdancing contest overlaid with the soundtrack of a riot at a Doors concert illustrates the rebellious behavior that music has inspired over the ages. By using multiple Bruce Springsteen and Def Leppard album covers, Ryan Humphrey's 'No Surrender, No Retreat' alludes to the September 11th attacks by juxtaposing notions of patriotism with mass destruction.

Jesse Amado's graphite letters reveal the ambiguity of language, by appropriating the letters from James Brown's lyrics 'Please, please, please baby please don't go, I love you so'. Amado negates actual meaning by converting these lyrics into pure form. Similarly, Erik Hanson's drawings feature song titles borrowed from David Bowie and Blondie. Stripped of their meaning they become graffiti that floats ambiguously in a dark sky, devoid of any context. Fia Backstrom presents a laptop computer that randomly generates its own soundtrack, corresponding to the graphics on the screen. Backstrom transforms the act of musical composition into something automatic, devoid of human error or emotion.