Three selected artistic experiences are merged, by their common ground: the attitude towards dramatic events in the social domain. They explore the time, symbolically marked by the fall of the Berlin wall and what is it that exactly started with post socialism, a time whose very beginning is deeply paradoxically as it is defined by an ending. 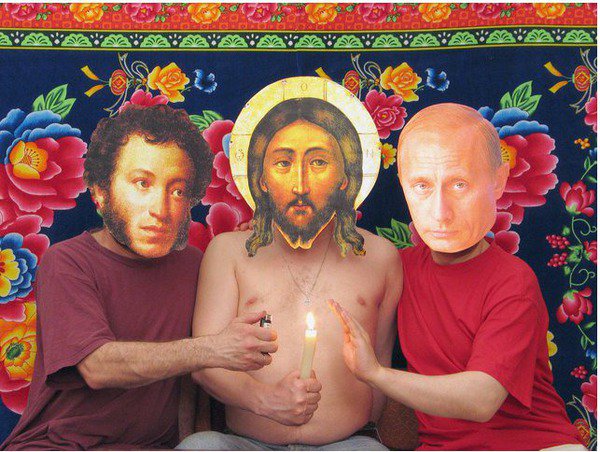 The Ludwig Museum - Museum of Contemporary Art presents the exhibition titled Transition and Transition under the curatorship of the Montenegrin art historian and critic Petar Ćuković. Three selected artistic experiences are merged, that of Oleg Kulik, Josip Vaništa and the Blue Noses Group, by their common ground: the attitude towards dramatic events in the social domain. They explore the time, symbolically marked by the fall of the Berlin wall and what is it that exactly started with post socialism, a time whose very beginning is deeply paradoxically as it is defined by an ending. The present is anxiously lingering between an ending of one era, that it wants to have no connection with, and dreaming about a prolific future that it over and over again fails to reach.

Josip Vaništa, a Croatian doyen of the Avant-Garde, is in his stylistic expression quite different form Kulik, he is contemplative and reserved, calm and cold, but shares with the Russian the common denominator or analyzing the process of societies passing from a communist to a liberal capitalist system. This exhibition will present his collages, which are stylistically keen to reduction, scarcity and minimalism, and that in a diary kind of way follow the horrors of the everyday transitional society.

Oleg Kulik, a Russian of Ukrainian ethnicity, is a world renowned artist best known for his radical performances and actions. Works from the so called animalistic cycle, where he inhibits an animal persona, became an emblem of his art in the 1990s. This radical actionism, as well as his works in the medium of photography and video, are a reaction to a brutal reality of a post socialist society, of this highly paradoxical time in history. He is considered to be one of the leading, if not the leading exponent of a cruelly naturalistic and provocative artistic expression.

The Russian group Blue Noses (Alexander Shaburov and Vyeceslav Mizin) is according to some one of the most remarkable phenomena in the art world of the 21st century. Their work is based on the tradition of the Russian absurd, but at the same time is highly saturated with humour, self-irony and cynicism. Through the medium of photography and video installations they deal with the everyday clichés in a populist, small and unpretentious way. Their artistic way of expression desires to be understandable to all.

The exhibition is organised in cooperation with Croatian art collector Marinko Sudac.

From the Archives of the Transition
Around the end of the century
Among the key historical moments in the 20th century the fall of the Berlin Wall has certainly become a sublime symbolic image, a powerful foundational metaphor, an omnipresent trope in the variable marking of the watershed of ages: in the social, historical, economical-political and cultural-artistic fields. Time seems to have been divided into before and after this Fall. The term transition, necessarily connected to this, has become concocted, but it has also become a trope. Marking the changeover from one social system (Communism) to another one (capitalism), it has become a kind of commonplace, a term whose inflated usage, which often converted it into an empty portmanteau idea of changing from a (bad) socio-political system, the negative Communist one, which was unhealthy, historically self-collapsed and broken, to another (good) one, the positive capitalist one, which was healthy, historically self-confirmed and strengthened, was most often the idea of a cruel privatisation, of a wild initial accumulation/pillage of capital in a new historical interpretation, with new protagonists and a new, soulless morality. The process of the transition of the former Communist East out of Communism has turned out to be ‘a drama of privatization that naturally played out beyond all the usual conventions of civilization.’ This is what, very broadly speaking; the exhibition Transition is analysing.

The works by Josip Vaništa and Oleg Kulik, although they belong to different cultural and artistic, and even, to some extent, political contexts, have a common denominator - the reference to the time of transition, that is, the time of a cruel, uncontrolled privatisation. Josip Vaništa systematically produced during the transitional 1990s, in the form, one could say, of an artist’s diary. “Transition” in which an enchanted web which cannot be untangled was woven from bloody war, mindless politics, soulless and profiteering tycoon economics, raging nationalism, a pathetically aggressive Church, a feeble-minded entertainment industry and servile media, producing together vast, nearly immeasurable human misery. The invisible is an active constituent and part of his work, as is an inclination towards reduction. His basic, actually, his only material are clippings from newspapers or periodicals which are then glued to white A4-size paper. Vaništa’s later collages represent the “face of the very horror we are passing through”.

In the nature of things, global “eyes” were focused with particular attention on events in the USSR and, after its dissolution, in Russia. “The owner of everything in the country was the abstract ‘Soviet people’, it was now replaced by the concretely embodies oligarch, the former factory director; instead of the intellectual abstractions which had such huge significance in Russian 20th century art, now there was ‘unmediated reality’. In the 1980s, the Russian artists set themselves against the international artistic context while also establishing a distance from it. There was a permanent tendency of art to have an active relationship with the ideological social sphere. The installation became the principal form of Russian art in the 1980s and 1990s, more precisely on Malevich’s practice of designing his own shows as fundamental instruments for the propaganda of his Suprematist ideas and the fact that all of his large individual exhibitions were essentially demonstrations of conceptual “ideological work.

This socio-political and historical context also represented the temporal frame in which Oleg Kulik, an immigrant from Kiev, appeared on the Russian arts scene, more precisely, its Muscovite circles. It was this brutal “unmediated reality” that provoked radical actionism, the most meaningful artistic phenomenon on the Muscovite arts scene this decade, “an art of intense, almost exhibitionist performances in which corporality, physical danger and ethics were actualised”. Kulik’s work includes and animalist cycle, i.e. a zoophrenic programme among which Mad Dog has became an emblem of his art in the 1990s. Although he would occasionally return to the notion of transparency during the 1990s, the radically altered the character of the socio-cultural reality in Russia during the last decade of the 20th century – mostly its brutality – shifted the artist’s interest from somewhat abstract intellectual reflections on reality in general, based on analyses of mediatised sensory perception.

It was in this world, at the very end of the decade, and no less than at the dawn of the “new Millennium”, that the Blue Noses artistic group appeared. The appearance of this group, whose members are Alexander Shaburov and Viacheslav Mizin, marked a certain change of generations in modern Russian art. The group deals with everyday clichés to the point of self-irony. Their main way of expression is video or photo recording on a simple disk. They have a tendency towards “populist”, “small” and unpretentious, understandable forms of artistic expression, etc. Blue Noses would fill their works to overflowing with precisely such “lifelike” content, or, rather, the key content used to shape the living space via the principal media channels. As they claim themselves, the art of the Blue Noses is “popular”, understandable in both form and content to all. The face of the current century, as the Blue Noses well know, now requires new artistic phantasms and images.
Petar Ćuković, curator, January 2014