Circumnavigating established disability narratives of overcoming, heroism and pitifulness, the works in Of Other Bodies rethink the possibilities offered by instances of bodily crisis, disruption and difference. 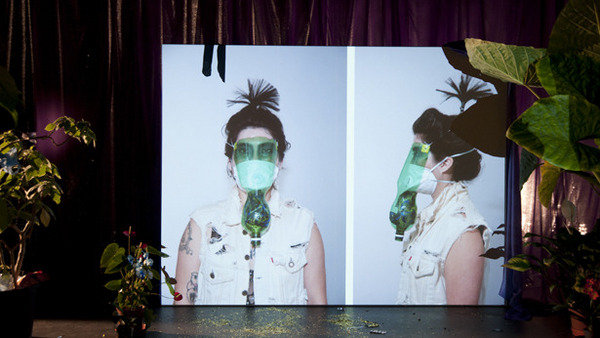 Circumnavigating established disability narratives of overcoming, heroism and pitifulness, the works in Of Other Bodies rethink the possibilities offered by instances of bodily crisis, disruption and difference. The exhibition will be accompanied by a public programme of collateral events including HOLO, a performance-lecture by Kevin Burns, commissioned by CCA.

Pauline Boudry & Renate Lorenz (CH, DE) In their primarily filmic works, the two artists deal with the emergence of photography and film against the backdrop of colonial history and the invention of body norms. Historical photographs, texts or songs become the starting point for their search for alternative (sexual) practices and ways of living, conjoining with subversive approaches from pop, glamour, and camp. Recent exhibitions include PER SPECULUM ME VIDEO, Frankfurter Kunstverein (2013); Patriarchal Poetry, Badischer Kunstverein, (2013); Toxic, Laboratoires d'Aubervilliers, as part of the Triennale Paris (2012); Patriarchal Poetry, Badischer Kunstverein (2013); A Toxic Play in Two Acts, South London Gallery (2012); and No Future / No Past, Swiss Off-Site Pavilion, 54th Venice Biennale (2011).

Kevin Burns' (NI) performance-lecture for Of Other Bodies reconsiders the role of speech disfluency—'stammering' or 'stuttering'—as a disruption of economic and cultural norms. Burns examines the capacity of stammering to expand the boundaries of what is considered 'speech,' by tracing the mutation and re-deployment of spoken gesture in digital speech and cloud-data technology.

Falke Pisano (NL, DE) works across a range of media and modes, including sculpture, drawing, video, performance-lectures and texts. Her work, The Body in Crisis (2011–), tracks changing conditions of the human body in historical moments of crisis. Pisano recently held solo exhibitions at The Showroom, London (2013) and De Vleeshal, Middelburg (2012). Her work was included in the Istanbul Biennial (2013), the Shanghai Biennale (2012), and the 53rd Venice Biennale (2009). In 2013, she received the Prix de Rome. Originally from the Netherlands, Pisano lives and works in Berlin.