Trees Prosper & Len Graham. Both artists share an interest in musical and cinematic rhythm, personal histories and forms of collaborative production. Their new works continues the artist's interests in social environments and their incidental and fugitive nature. 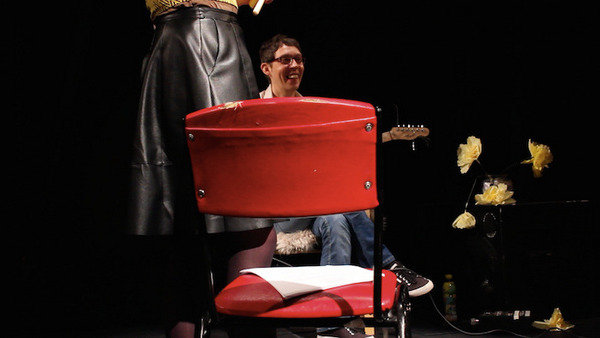 Seamus Harahan has drawn together a number of collaborators under the name Trees Prosper (Seamus Harahan, Patrick Morgan, Christina Anna Morgan and Sara J. Barry), who have in turn worked with Irish folk singer Len Graham. Titled Along The Faughan Side, the resulting work is a collaborative performance that will take place at CCA on Saturday, 10th October, and a series of recordings of their rehearsal that will be presented during the course of the exhibition. This new work continues the artist's interests in social environments and their incidental and fugitive nature. Music is a vital element in all of Harahan's works, with songs used as soundtracks or informing the composition, title or duration of individual works.

Kathryn Elkin's Why La Bamba? is a meditation on roleplaying, performance, cinema and the talk show—all common themes within Elkin’s practice. The work features musician John McKeown, cast as a young, nervous Dustin Hoffman. Why La Bamba? is scored by McKeown's take on the famous Mexican folk song, which became one of early rock and roll’s greatest hits. Kathryn Elkin's practice typically involves performance, video and writing, which often manifests through citing a referent—such as an artwork, artist, writer, or performer—upon which she applies a set of personal methods of translation, transcription and representation.

The exhibition will be accompanied by a screening series presented in partnership with LUX and the BFI National Archive. Curated by William Fowler (Curator of Artists’ Moving Image, BFI National Archive), This is Now: Film and Video After Punk looks at artists' film and video from the early 1980s, a unique moment when cheap new technologies enabled new voices to be heard and the DIY approach of punk was reinvigorated. The BFI National Archive has restored twenty Super 8 and 16mm films from this period, including work by John Maybury, Cerith Wyn Evans and John Smith, and the majority of titles are presented for the first time in over three decades. CCA's contextual programme will include screenings and speakers from the Derry Film and Video Workshop (formed, 1984); filmmaker Vivienne Dick, drawing out parallels between the UK post-punk moment and the No Wave scene in New York, and tracing the legacy of that era; and writer Maeve Connolly, responding to Kathryn Elkin's use of BBC archive footage in Michael's Theme (2014), and various works in This is Now, considering television's changing form and function as a site of performance. Dates TBC, please check back for further updates and details.

Seamus Harahan grew up in London and East Tyrone and lives and works in Belfast. He is an ex-director of Catalyst Arts Belfast and is represented in London by Gimpel Fils. He was an artist in residence at Centre Culturel Irlandais, Paris (2015), received a Paul Hamlyn Foundation Award for Artists (2009) and represented Northern Ireland in the 51st Venice Biennale (2005). Screenings and exhibitions include: Fact or Fiction, Berwick Film & Media Arts Festival 2015; 52nd Ann Arbor Film Festival (Jury Award, 2014); Cold Open / Before Sunrise, Kerlin Gallery, Dublin (2014); Assembly, A survey of Recent Artists' Films and Video in Britain 2008-13, Tate Britain, London (2013-2014); Nought to Sixty, ICA, London (2008). He has been shortlisted for the Film London Jarman Award 2015.

Kathryn Elkin grew up in Bangor, Northern Ireland, and is currently based in Leith, Scotland. She graduated from Glasgow School of Art’s Environmental Art course (2005) and received a Post Graduate Diploma in Art Writing from Goldsmiths College, London (2012). She was a Lux Associate Artist (2012-2013) and Artist in Residence as part of the BBC's Artists in the Archive project (2014). Recent exhibitions, screenings and performances include: The Elephants in the Room, ICA, London (2015); Michael's Theme, Tate Modern, (2014); Mutatis Mutandis, London Film Festival (2014); Until the Stars Turn Cold, S1 Sheffield (2014); and 30 Years of the Future, Castlefield Gallery, Manchester (2014).

This exhibition is made possible through the generous support of the Arts Council of Northern Ireland.