Premiere partie. An homage to many artists', poets' and philosophers' reflections on the physical, moral and political factors that shape our world. The title - borrowed from Victor Hugo's Promontoire du songe - addresses the current time, a political time in which seeing is already a means of action. In this space-place-problem Family Business (created by Cattelan and Gioni), with guest curator Nadja Argyropoulou, will explore contemporary concerns and age-old anxieties under the title "The Age of Practices". 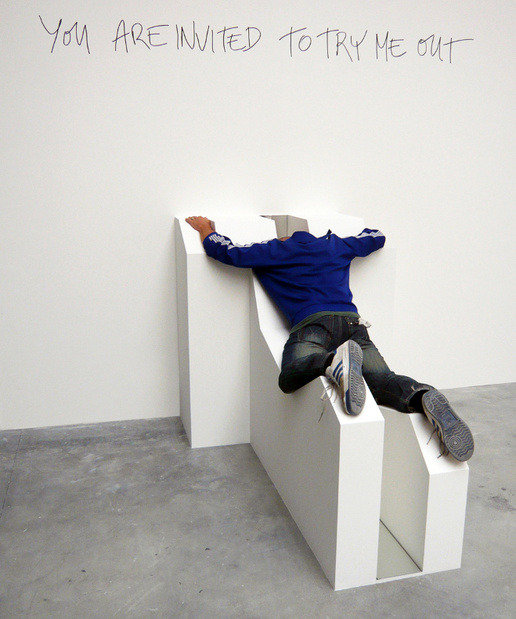 Family Business is an exhibition space initiated by Maurizio Cattelan and Massimiliano Gioni on February 2012. Family Business is a guest house – a place where friends, enemies, people admired and respected are invited to present the works of artists they support and projects they believe in. It is a free time-share: a space made available to people who have something interesting to say; a way to get to know new families and friends. Family Business is a non-for-profit space open to experimentation and irreverent exhibition formats powered by the Center Of Curatorial Studies at Bard College. A guest + a host = a ghost. Nadja Argyropoulou is the Family Business guest (or ghost) curator. Family Business was until recently operating in New York, USA, and has hosted a multitude of exhibitions, projects, concerts, parties and events. Succumbing to some kind of poetic justice, Family Business disappeared from the space on 21st street and 10th avenue, in Chelsea, a little after inviting and proudly presenting «The School of Death», (organized by Cabinet and Simon Critchley, 7- 18 May 2013).

And now Family Business is being conjured in Paris, France, at the powerful call of Palais de Tokyo. There are plans afoot to spread a full, viral presence in the Palais de Tokyo’s labyrinthine corridors. Family Business will even have a room to call its own. A room? Yes—in the form of a weird outhouse-home (a cross between a basement and an attic). As for February 13th, 2014 this queer space will mark Family Business‘s presence, and act as a transmitter, an indicator, a shelter, a vessel, a skin, a (back)stage or perhaps even a 4-D drawing. This hybrid home space, conceived and designed by Family member, architect Dakis Joannou, could be the shadow twin of a found object; e.g. of an unfinished, unauthorised, home in a Greek neighborhood. It is a basement with the ‘potential’ of a first floor; It features an internal staircase which leads to this open, not yet fully constructed floor, while offering a dog’s eye view to the main family seating room; it is a home in the making and on the move; the prospect of a family dwelling, rather than a completed thing. This recontextualized ‘object trouvé’ corresponds to the business of Family Business: hospitality and the exploration of symbiotic relationships, the celebration of «the democracy of misunderstandings» (to quote Cattelan), which always starts with families. Family Business will thus act as a kind of a benevolent virus, crossing or coexisting with the scheduled Palais de Tokyo’s exhibitions and events. It will be shape shifting (parts may be added or taken away, colors, textures will change).

In this space-place-problem Family Business, with guest curator Nadja Argyropoulou, will explore contemporary concerns and age-old anxieties under the title «The Age of Practices». This exploration is about life, people and practices. Family Business will unfold a research into the bleeding edges of disciplines and the shifting that has been taking place in creative processes and their contexts; «The Age of Practices» will point to open, new and neglected, or ‘out of sync’ formats which suggest that creativity is currently being communicated and altered at the same time, that it is highly idiosyncratic and yet shaped by the social sphere. Artists, scientists, academics, storytellers, bloggers, travellers, writers, people in the applied arts, film, music, dance and fashion, individuals and collectives will be invited to practice, to anticipate, to be curious and attentive, to act on experimental ideas and views, to have fun and make a change.

«The Age of Practices» will be shaped as it will be practiced and will be communicating (if perhaps rather erratically) its news. Two of its structural events can be announced hereand more will follow: «The Order of the Third Bird» will create an installation, a situation and a series of actions in the Family Business home. Members of the Order will visit on both a scheduled and unscheduled basis to activate the installation and engage in a silent practice of the Order’s ritual protocol. The seminar «Quelle actualité pour la « critique institutionnelle aujourd’hui ?» and its three organisers Katia Schneller, Vanessa Theodoropoulou and Tristan Tremeau, will be displaced from the INHA in Palais de Tokyo, for a practice on « pseudo-institutions » in the art world, with Gregory Sholette as a guest-practitioner. As much more will be coming, stay close and stay tuned! as Walter Benjamin put it, «I have nothing to say; only show».

L’état du ciel is a homage to many artists, poets and philosophers reflections on the physical, moral and political factors that shape our world. Over the course of a season, it presents over ten proposals or exhibitions centering on that theme, as artists adopt André Breton’s definition of their role, as applied to Giorgio de Chirico:

“The artist, that sentinel on the endless road, always on the lookout.”

As far back as Goya, if not further, modern and contemporary artists have attentively examined contemporary reality. They often depict the landscape of our anxieties, dread, alarm, revolt, utopia and suggest poetic ways of transforming the present. If we study the world as one might scrutinize an image, today stops being an imposed destiny and becomes a changing surface that we could, perhaps, transform.

New exhibition formats stem from these observations, innovative to the extent that the word “exhibition” may no longer apply. Thus, we will see Georges Didi-Huberman and Arno Gisinger transpose the theme of lamentation into the language of film, inspired by Aby Warburg’s Mnemosyne Atlas; a selection of works from the remarkable collections of the Centre national des arts plastiques dedicated to intangible creations; Gérard Wajcman and Marie de Brugerolle reflect on the theme of the fall, from the Berlin Wall to the Twin Towers; and Thomas Hirschhorn, with his immense installation Flamme éternelle, involve nearly 200 intellectuals and poets in a debate focusing on the interconnections between art and philosophy and the ways in which these affect our consciousness.

Add to that ten fictions conceived by Hiroshi Sugimoto on the theme of humanity‘s disappearance, Angelika Markul’s scrupulous exploration of the Chernobyl and Fukushima disasters, David Douard’s viral hybrids of bodies and machines, and Ed Atkins’ digital variations.

Each represents a symptom of the world’s general state, focusing on both contemplation and action.

L’état du ciel, a title borrowed from Victor Hugo’s Promontoire du songe, in which the author wrote that “the sky’s normal state is at night”, addresses the current time, a political time in which seeing is already a means of action.
New Ghosts stories

New Ghost Stories is a poignant installation conceived by Georges Didi-Huberman and Arno Gisinger after the legendary Atlas Mnemosyne by early 20th century art historian Aby Warburg. The result is certainly not an exhibition, nor an artwork in the traditional sense, but a presentation in a previously nonexistent form of an incomparable meditation on the way in which photography and cinema have each prolonged past masterpieces that are testaments to humanity.

Georges Didi-Huberman began his methodical reflection on art over thirty years ago, and, through its examination of history, the whole of his work has deepened our psychical and ethical relationship to images. Together with the artist Arno Gisinger, they present a new evolution of the spectacular installation that they devised for Le Fresnoy in 2012 and invite visitors of Palais de Tokyo to dive into the heart of scenes that haunt our gaze.

David Douard is without a doubt one of the most unsettling revelations in recent years. His work savagely leaps into the most contradictory of references — poetry, history of science, technology, animism, counterculture, etc and he gives them expression through combinations of video, sculpture, collage, sound, and past masterpieces grafted onto interactive installations in order to create allegorical tales that reflect the infectious relationships that manifest between worlds that hoped themselves impermeable to one another. Transforming the exhibition into a rumor, David Douard proposes to slip into the “diseases of the real” for his first major solo exhibition. Composed of viral works generated by a text matrix, the exhibition explores the slow shifts and fractures that haunt us and become hybrid sculptures, mutating scripts, and uncontrollable images.
Land of departure

To reflect on the destiny of humanity, Angelika Markul’s work combines the forces of nature with the upheavals caused by the actions of mankind. Videos, sculptures and environments form landscapes that oscillate between zones of meditation and zones of turbulence. The artist leads us to our most inner depths, where ecological preoccupations and questions that have perplexed humanity for time immemorial, a fascination with technology and a contemplation of the vastness of nature resonate. A complex set of forces is at play within the artist’s hands as she summons the specters of a multitude of natural or industrial catastrophes. We stroll through the exhibition as we might explore a complex scenario, where each work startles, shakes up our memory:

“I reconstruct a memory by associating actual remembrances with other images, which I encounter and film,” explains the artist. “My relationship to memory stems from my obsession with death and with my own history.”

Something Less, Something more

A new exhibition centered on the performative collections of the Centre National des Arts Plastiques.

For years, the Centre national des arts plastiques has been assembling a remarkable collection dedicated to the often intangible creations developed around the inexact notion of “performance”. A selection of this little-known collection is presented for the first time at Palais de Tokyo and completed by the invitation of several artists. Exhibition curators Sébastien Faucon and Agnès Violeau speak of the project: “Building on the CNAP’s (Centre national des arts plastiques) relational and protocol-based collections, Something Less, Something more approaches the writing of the exhibition and its grammar through the prism of living art." It seeks to reformulate the exhibition experience by offering a new, more subjective, behavioral approach within the aim to “reconnect art with ordinary and collective existence”.