This experimental work was created by the artists and architects Diller Scofidio + Renfro in collaboration with Laura Kurgan and statistician-artist Mark Hansen with a core team of scientists and geographers is now part of the Fondation Cartier collection. 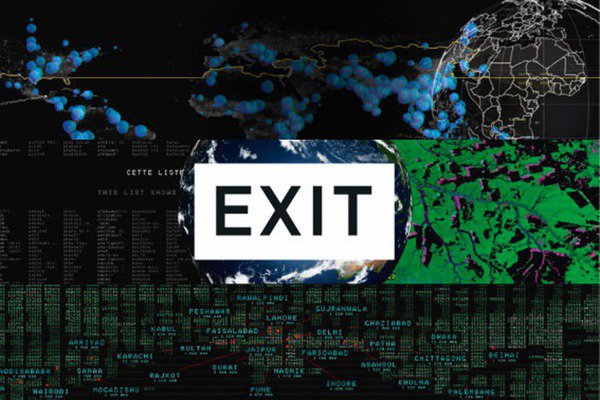 In collaboration with Robert Gerard Pietrusko and Stewart Smith

Presented by the Fondation Cartier at the Palais de Tokyo, on the occasion of the Cop21, the United Nations Conference on Climate Change.

The Palais de Tokyo is honored to present from November 25, 2015 to January 10, 2016, the innovative installation Exit presented by the Fondation Cartier pour l’art contemporain. Based on a prompt set out by French philosopher and urbanist Paul Virilio, this experimental work was created by American artists and architects Diller Scofidio + Renfro in collaboration with architect-artist Laura Kurgan and statistician-artist Mark Hansen with a core team of scientists and geographers for the exhibition Native Land, Stop Eject in 2008, and is now part of the Fondation Cartier collection. Exit is composed of a series of immersive animated maps generated by data that investigate human migrations today and their leading causes, including the impacts of climate change. Its complete 2015 update has been planned to coincide with the pivotal Paris-based United Nations Climate Change Conference (COP21). A crucial opportunity to limit global warming, the COP21 provides a powerful context in which to consider the issues at the heart of Exit: «It’s almost as though the sky, and the clouds in it and the pollution of it, were making their entry into history. Not the history of the seasons, summer, autumn, winter, but of population flows, of zones now uninhabitable for reasons that aren’t just to do with desertification, but with disappearance, with submersion of land. This is the future.» (Paul Virilio, 2009)

Commissioned by the Fondation Cartier at a time when human migration flows began to take place on an unprecedented scale, Exit was first shown in its space at the end of 2008 as part of the exhibition Native Land, Stop Eject, and subsequently at the Kunsthal Charlottenborg, Copenhagen during the COP15 in 2009, and at the inauguration of the AlhondigaBilbao, Bilbao in 2010. Conceived as an artwork, Exit uses geo-coded data that was collected from over 100 sources, processed through a programming language and interpreted visually. The work is a reflection on the notions of being rooted and uprooted, as well as related questions of identity, Native Land addressed issues that have continued to intensify. The current asylum crisis makes the 2015 presentation of Exit more timely and relevant than ever.

Using a wide array of sources ranging from international organizations to NGOs and research centers, Exit provides the rare opportunity to visually understand the complex relationships between the various factors underpinning contemporary human migrations. The work has been entirely updated, reflecting the alarming evolution of the data since it was first presented in 2008. In each of the six maps, the connection between humans and their environment has degraded considerably over the past seven years. The number of people displaced by wars, persecutions and violence has reached an all-time peak since the end of World War II, leading to a major political crisis here in Europe, though most of those displaced are hosted in developing countries. Urbanization and large-scale deforestation in tropical countries have continued at a riveting pace, leading to the uprooting of an increasing number of indigenous communities and the resulting loss of their native languages. Current pledges to cut greenhouse gas emissions are judged widely insufficient to achieve the goal of a maximum temperature increase of 2°C by the end of the century, and scenarios of a global warming that could reach 4°C or even 6°C are no longer considered science-fiction.