Reconstructing the Universe. Featuring over 360 works by more than 80 artists, architects, designers, photographers, and writers, this multidisciplinary exhibition examines the full historical breadth of Futurism, from its 1909 inception with the publication of Filippo Tommaso Marinetti's first Futurist manifesto through its demise at the end of World War II. 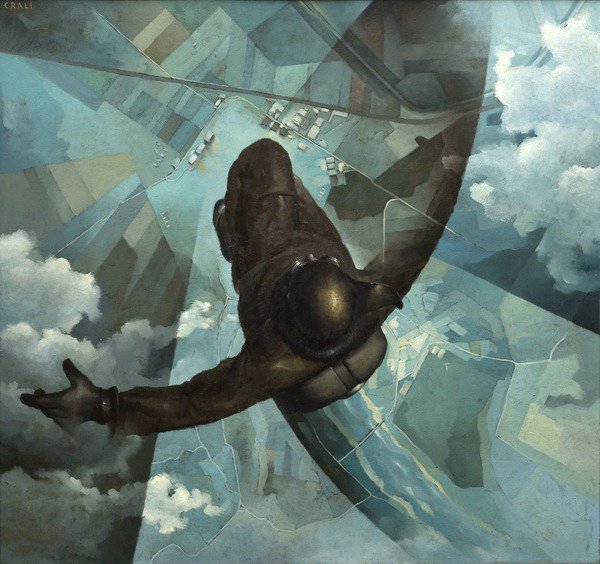 From February 21 through September 1, 2014, the Solomon R. Guggenheim Museum presents Italian Futurism, 1909–1944: Reconstructing the Universe, the first comprehensive overview in the United States of one of Europe’s most important 20th-century avant-garde movements. Featuring over 360 works by more than 80 artists, architects, designers, photographers, and writers, this multidisciplinary exhibition examines the full historical breadth of Futurism, from its 1909 inception with the publication of Filippo Tommaso Marinetti’s first Futurist manifesto through its demise at the end of World War II. The exhibition includes many rarely seen works, some of which have never traveled outside of Italy. It encompasses not only painting and sculpture, but also the advertising, architecture, ceramics, design, fashion, film, free-form poetry, photography, performance, publications, music, and theater of this dynamic and often contentious movement that championed modernity and insurgency.

The exhibition is organized by Vivien Greene, Senior Curator, 19th- and Early 20th-Century Art, Solomon R. Guggenheim Museum. An international advisory committee composed of eminent scholars from many disciplines provided expertise and guidance in the preparation of this thorough exploration of the Futurist movement, a major modernist expression that in many ways remains little known among American audiences.

About Futurism
Futurism was launched in 1909 against a background of growing economic and social upheaval. In Marinetti’s “The Founding and Manifesto of Futurism,” published in Le Figaro, he outlined the movement’s key aims, among them: to abolish the past, to champion modernization, and to extol aggression. Although it began as a literary movement, Futurism soon embraced the visual arts as well as advertising, fashion, music and theater, and it spread throughout Italy and beyond. The Futurists rejected stasis and tradition and drew inspiration from the emerging industry, machinery, and speed of the modern metropolis. The first generation of artists created works characterized by dynamic movement and fractured forms, aspiring to break with existing notions of space and time to place the viewer at the center of the artwork. Extending into many mediums, Futurism was intended to be not just an artistic idiom but an entirely new way of life. Central to the movement was the concept of the opera d’arte totale or “total work of art,” in which the viewer is surrounded by a completely Futurist environment.

Futurism is commonly understood to have had two phases: “heroic” Futurism, which lasted until around 1916, and a later incarnation that arose after World War I and remained active until the early 1940s. Investigations of “heroic” Futurism have predominated and comparatively few exhibitions have explored the subsequent life of the movement; until now, a comprehensive overview of Italian Futurism had yet to be presented in the U.S. Italian art of the 1920s and ’30s is little known outside of its home country, due in part to a taint from Futurism’s sometime association with Fascism. This association complicates the narrative of this avant-garde and makes it all the more necessary to delve into and clarify its full history.

Exhibition Overview
Italian Futurism unfolds chronologically, juxtaposing works in different mediums as it traces the myriad artistic languages the Futurists employed as their practice evolved over a 35-year period. The exhibition begins with an exploration of the manifesto as an art form, and proceeds to the Futurists’ catalytic encounter with Cubism in 1911, their exploration of near-abstract compositions, and their early efforts in photography. Ascending the rotunda levels of the museum, visitors follow the movement’s progression as it expanded to include architecture, clothing, design, dinnerware, experimental poetry, and toys. Along the way, it gained new practitioners and underwent several stylistic evolutions—shifting from the fractured spaces of the 1910s to the machine aesthetics (or arte meccanica) of the ’20s, and then to the softer, lyrical forms of the ’30s. Aviation’s popularity and nationalist significance in 1930s Italy led to the swirling, often abstracted, aerial imagery of Futurism’s final incarnation, aeropittura. This novel painting approach united the Futurist interest in nationalism, speed, technology, and war with new and dizzying visual perspectives. The fascination with the aerial spread to other mediums, including ceramics, dance, and experimental aerial photography.

The exhibition is enlivened by three films commissioned from documentary filmmaker Jen Sachs, which use archival film footage, documentary photographs, printed matter, writings, recorded declamations, and musical compositions to represent the Futurists’ more ephemeral work and to bring to life their words-in-freedom poems. One film addresses the Futurists’ evening performances and events, called serate, which merged “high” and “low” culture in radical ways and broke down barriers between spectator and performer. Mise-en-scène installations evoke the Futurists’ opera d’arte totale interior ensembles, from those executed for the private sphere to those realized under Fascism.

Italian Futurism concludes with the five monumental canvases that compose the Syntheses of Communications (1933–34) by Benedetta (Benedetta Cappa Marinetti), which are being shown for the first time outside of their original location. One of few public commissions awarded to a Futurist in the 1930s, the series of paintings was created for the Palazzo delle Poste (Post Office) in Palermo, Sicily. The paintings celebrate multiple modes of communication, many enabled by technological innovations, and correspond with the themes of modernity and the “total work of art” concept that underpinned the Futurist ethos.

Exhibition Catalogue
A fully illustrated, 352-page catalogue accompanies Italian Futurism, 1909–1944: Reconstructing the Universe. Featuring the work of nearly thirty scholars, it offers an important contribution to the understanding of this major avant-garde movement of the 20th century. Edited by exhibition curator Vivien Greene, the book begins with three introductory essays: an overview of Futurism, an analysis of its historiography, and an investigation of its social and political context. It is then structured like a microhistory, with short texts focusing on specific artists, series, and moments to present a selection of Futurism’s many facets. A hardcover edition priced at $60 and a softcover edition priced at $40 will be available at the museum shop and online at guggenheimstore.org, and distributed in the United States through ARTBOOK | D.A.P.

Education and Public Programs
Italian Futurism, 1909–1944: Reconstructing the Universe is accompanied by a range of public programs, including a series of lectures by Futurist scholars, a gallery program, film screenings, and performances by Luciano Chessa and Daniele Lombardi. For complete information about the programs presented in conjunction with the exhibition, please visit guggenheim.org/calendar.

Futurism Lecture Series
In this lively series, distinguished scholars present current research on a range of significant themes, artists, and disciplines within Italian Futurism including: the art and theories of Tactilism; machine aesthetics; and World War I and female Futurist writers and artists. An exhibition viewing follows each program. $12, $8 members, free for students with RSVP.

“Ivo Pannaggi, Arte Meccanica, and the International Avant-Garde”
Wednesday, May 7, 6:30 pm
Christine Poggi, Professor of the History of Art, University of Pennsylvania

“War, Women, and Sexuality in the Futurist Avant-Garde”
Tuesday, May 20, 6:30 pm
Lucia Re, Professor of Italian and Gender Studies, University of California, Los Angeles (UCLA)

This exhibition is made possible by Lavazza.

Support is provided in part by the National Endowment for the Arts and the David Berg Foundation, with additional funding from the Juliet Lea Hillman Simonds Foundation, The Robert Lehman Foundation, and the New York State Council on the Arts.