Koenraad Dedobbeleer features new works as well as works by artists, designers or architects who have had a role in the evolution of his practice. Raymond Barion's intriguing paintings employ an idiosyncratic inventory of spatial perspectives, constructive elements and critical propositions. Laure Prouvost creates a 'dramaturgy' of objects and images, moving or still, that disrupts the conventions of film screenings. 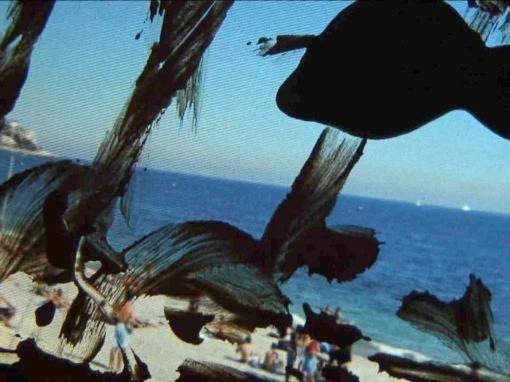 Koenraad Dedobbeleer
The Desperate, Furiously Positive Striving of People Who Refuse to Be Dismissed

The exhibition brings together new and existing works by Koenraad Dedobbeleer (b. 1975, Brussels), as well as works and reproductions of works by artists, designers or architects who have had a transformative role in the evolution of his practice. A striking scenography of podiums and prosthetic pedestals highlights the operations that articulate Dedobbeleer’s investigation, but also the points where the practice is anchored in art history – via affinity or difference, similarity or friction. The installation does not distinguish emphatically between constituents, between own work and that of another, or between work and document; rather, the interaction of these distinct objects proposes to viewers an imaginative engagement that goes beyond norms of attribution, authorship and museological decorum.

The installation outlines the composite image of an ‘allegory of sculpture’: a conversation, both palpable and abstract, about the recent history and aesthetic possibilities of this medium. This allegorical reference inscribes the versatile nature of the project, its swirl of footnotes, caveats and appendixes, in a representational tradition running from Andrea Pisano to Gustav Klimt and beyond, aiming to capture the particular forms in which the sculptor sees and thinks, carves and models. Which specificities constitute contemporary sculpture, and what is the threshold between material intervention, functionality and aesthetic value? Always present in the Dedobbeleer’s work, these questions are brought to the fore and interwoven in an allegorical dialogue – a conversation between objects, documents and spectators, maquettes and actual spaces, modes of making and un-making.

The works by Dedobbeleer selected for this presentation manifest the artist’s formal and spatial inventiveness, but also his rigor – never excluding the possibility of play – in thinking through notions of display, art-historical reference or metaphorical extrapolation. They frame the ‘body of sculpture’ as a sequence of operations and connections by which objects withstand gravity and prop themselves up to encounter our scrutiny, but also as the site where cultural histories and sensuous apprehension, aspirations and misunderstandings are anamorphically conjoined. These works share the stage of the exhibition with a heterogeneous range of artefacts, such as a replica of the ‘Venus of Arles’, produced in the Atelier de moulage at the Louvre, retouched by the artist to bring the complicated story of ‘creative restoration’ of that antique sculpture to an affective conclusion: a delicate ‘détournement’ by which the Venus begins to resemble someone else than itself. A slightly enlarged version of the portrait of the sculptor Juan Martínez Montañés, painted by Diego Velázquez in 1635 and copied for this exhibition by Jesús Fernández at the Prado, describes the sculpted object as absence of pigment on the canvas: the fully-formed portrait contrasts with the vague traces that outline the bust the sculptor is working on. These copies are joined by a photographic lexicon of male and female contrappostos, compiled in 1977 by artist Marianne Wex, a bronze cast of a door handle by architect Kris Kimpe and a door handle designed by philosopher (and sporadic architect) Ludwig Wittgenstein, by reproductions, postcards and various other slippages between the categories of art and design, the authentic and the fake.

This choreographed installation, animating objects through their alternative uses or understandings, is of course far from some post-modern denunciation of the ‘lost original’, an original eroded by copies or usurped by simulacra. A more profitable reference would perhaps be the rhetorical genre of the ‘paragone’: the polemic on aesthetic supremacy that informed the development of artistic theory in 16th-century Italy and the Low Countries, comparing and debating the capacity of literature, painting or sculpture to imitate the multiplicity of life. The comparison staged by Dedobbeleer brings together sculpture and its antonyms, its lesser selves – design objects, urban fixtures, utensils of daily life or art-making. And if something is captured here through mimesis, it isperhaps the outline of the artist’s thinking process: the patterns and instruments that ground it, make it tangible, place it within the reach of ‘the palm at the end of the mind’ (as the poet Wallace Stevens put it). We are presented with a collection of scales and regimes of value, things-in- themselves and things-as-proxies competing for significance, categories in disarray and a challenging exploration of artistic subjectivity: never autonomous, subjectivity is always enmeshed with the biographies of the objects that express and sustain it.

Exhibition co-produced with GAK – Gesellschaft fur aktuelle kunst, Bremen, where a version of the project will be presented in the second half of 2014. An edition project accompanying the exhibition is realized with support from Galerie Micheline Szwajcer, Antwerp, Mai 36 Galerie, Zurich, and S.M.A.K., Ghent.

Raymond Barion
Of Lenses and Arenas

Raymond Barion’s (b. 1946, Valkenburg) intriguing paintings employ an idiosyncratic inventory of spatial perspectives, constructive elements and critical propositions. His meticulous, floodlit, depopulated architectures, and his atmospherically-heavy interiors compose a particular history of seeing and being seen, of visibility and vulnerability: a history told without protagonists, but through threatening, uninhabitable spatial abstractions. The artist’s research fuses references to Duchamp and Baroque architecture, military cartography and Rem Koolhaas, the machinization in Deleuze and Guattari’s ‘Anti-Oedipus’ or Agamben’s ‘state of exception’. In the ecstatic environments Barion paints, space itself appears to exercise free will, obstruct passageways and camouflage fissures, attract and repel to equal extents – finally to create an illusion of radiant, functional seamlessness. A transparent sheet of emptiness seems to cover Barion’s mechanized landscapes, holding the eye at a distance from topographies without entry or exit.

The artist has a markedly political take on the spatial conditions of contemporary life, as mediated by recent architecture, neo-liberal public space policies and advancements in visual technologies. He sees, for instance, a direct connection between the gladiators’ arena in the Antiquity and today’s surveillance or recording devices: like the arena, the lens of the telescope or camera zooms in on or shoots confrontation and concealment, violence lived and built. Landmark works such as ‘Hotel’ (1980), ‘Projector’ (1983), ‘Theater’ (1981) and ‘Maginot’ (1982) illustrate Barion’s strategies of deconstructing and reassembling architectural or technological parts and processes, producing an agglomeration of surfaces that shelter one another, spaces both fractured and depthless, hallucinatory and vacant.

Barion’s works demarcate territories where sensuous stimulation is bound with coercion, artifical glow with exposure, productivity with deterioration. Huub Beurskens, from whose text on the artist the title of this show is borrowed, describes them as “flat projections of an eternally turning machinery that cannot exist beyond its projection”. The same text, written for Barion’s latest exhibition (in 1987 at ICC Antwerp), notes the paradoxical co-presence in the paintings of different modalities of figuring perspective: perspective lines intersecting at the horizon, in a vanishing point where space ‘closes up’ or folds upon itself, indicating the artist’s and viewer’s mastery over it, and, on the other hand, parallel projection, where lines remain equidistant and create a plane of perception with neither beginning nor end. Suspended between these two modes of figuration, Barion’s scenes remain unapproachable: the distance separating us from them equals both infinity and zero. The paintings reflect the forces that model and uphold the ‘scenes’ where contemporary life unfolds and suggest these forces operate at an impossible distance or too close to us, in either case eschewing perception and understanding.

Focusing on work made in ‘80s and ‘90s, and including a recently completed painting, the presentation highlights the relevance of Barion’s work to current debates on public space, multiplying social or political conflicts and the multiplying machines to document them visually. This aspect is reinforced in a critical re-evaluation of the artist’s pratice, via an essay commissioned to architectural theorist Stefaan Vervoort, investigating the dynamic, in art and in theory, between the imagination of the ‘outside’ and the overarching, all-inclusive space of capitalism.

Film-maker and installation artist Laure Prouvost (b. 1978, Lille), winner of the 2013 Turner Prize, reimagines the configuration and function of Extra City’s cinema, creating a ‘dramaturgy’ of objects and images, moving or still, that disrupts the conventions of film screenings. The project will grow over the duration of Prouvost’s residence with AIR Antwerp, progressively accommodating voices, lights, props and sculptural interventions that complicate, disturb and enrich the experience of cinema. With these different means, the project foregrounds the artist’s interest in polymorphous narrative: stories told from different viewpoints, full of incident and reverie, incorporating errors and non-sequiturs, forgetting and improvisation.

The first stage in the project is a scenography for two recent films: ‘Wantee’ (2013) and ‘Grand Ma’s Dreams’ (2013), recounting the convoluted story of the artist’s grandparents. Through the reference to these characters, the current project continues a narrative thread begun in the film ‘It, Heat, Hit’ (2011), presented by Laure Prouvost in the exhibition ‘Museum of Speech’, held at Extra City in 2011. In that older work, the artist’s ‘Conceptual granddad’, always lost and always sought for, bore a resemblance to British artist John Latham, whom Laure Prouvost assisted in the last years of his life. In the recent films, the portrait of this absent character is considerably more complex, as the artist revisits her grandparents’ decaying home to weave the plot of Grandad’s relation to the artistic establishment and the affective triangle uniting him, Grandma and the mysterious character Wantee, to whom erotically-shaped tea pots are dedicated.

Exuberant, whispered or playfully pedagogic, Prouvost’s films rely primarily on direct address, and at times engulf viewers in sensory and psychological overload, at once seductive and perplexing. Oscillating between moods, climaxes and anti-climaxes, the artist’s work returns in some sense to the first experiments with cinematic technology and the affective shock these induced in their spectators: the panic, for instance, that an actual train was headed their way from behind the screen. Laure Prouvost looks for an emotional threshold where the ‘virtuality’ of film and the ‘reality’ that begins at the edges of the screen would become indistinguishable, where signifier would be right next to the signified: ‘JUST HOLD ON TO THE IMAGES’, as she commands in another film, inviting us to imagine another form of proximity between moving image and spectator – a reciprocal, sensuous engagement.

Further episodes in the development of the installation will be announced via the website and newsletters of Extra City in the following months.

In collaboration with AIR Antwerp, where Laure Prouvost will be resident in Spring 2014. Realized with the generous support of the Fernand Willame Foundation.